The Alcon Tower, which is now already called “the eighth sister” (of the seven Moscow high-rises built at the end of Stalin’s reign – translator’s note) is being built at the intersection of the Third Transport Ring and the Leningrad Avenue. This extremely important crossroads on the way from Moscow to St. Petersburg is now rapidly developing. Moscow is growing bigger by the hour. From the north, across from the tower’s construction site, the VTB Arena Park is almost completed, with the pixelated “cap” of the renovated Dinamo Stadium, now renamed into VTB Arena, peeking from behind it. Diagonally, from the northwest, stands the residential complex “Tsarskaya Ploschad”, whose metropolitan scale is supported by careful drawing of various facades, most of them being made of brick, with the exception of the corner one, which, executed from light-colored stone and decorated with ornamental carved pattern, salutes to the “Openwork House” designed by Andrey Burov, on the opposite side of the Third Transport Ring. And, behind this house, towers the earliest high-rise centerpiece of this area – “Aviators House”, designed by Andrey Meerson, the best of Moscow’s “houses on legs”, decorated by oval brutalism-style towers. Still further behind these buildings, closer to the city center, there is the reconstructed “Bolshevik” factory with the metallic “can” of the Museum of Impressionism on its territory. Generally speaking, the context is really busy, not to mention the future views from the tower’s windows – the list of visible city sights tends to infinity. Views from the windows of the future apartment complex Alcon Tower Views from the windows of the future apartment complex Alcon Tower

Yes, the context here is extremely dynamic, and only the area lying southwest of the Novaya Bashilovka, consisting of five- and nine-story houses, does not seem to change at all. The land site at its corner, at the intersection of Moscow’s two major highways, lay empty since the time when in the 1960’s they tore down the mansion that had belonged to the owner of the “Yar” restaurant. In 2013, a closed-door competition took place: the victory was scored by an ABD project, which however, was turned down by the Architectural Council (see the report on the Architectural Council website, as well as our coverage). In November 2013, yet another board meeting finally arrived at a decision that this important crossroads would be better suited with a tower as a new town-planning centerpiece; the chief architect of Moscow, Sergey Kuznetsov, got this decision approved by the Moscow Mayor, Sergey Sobyanin. The city government invited Evgeniy Gerasimov and Partners to come up with the architectural concept; if the proposal would be convincing, the height restrictions of this area would be lifted. Evgeniy Gerasimov submitted the project of the tower in 2014, becoming the first St. Petersburg architect to ever make a presentation at the Architectural Council of Moscow. The direction chosen by the architects – in the spirit of Stalin architecture – has long since been studiously explored by the company, its traits and features prevalent or at least readable in the company’s signature projects, such as the housing complex “Pobedy, 5”, “Futurist”, “Verona”, and “Art View House”.

The idea of turning to the epoch that precipitated the era of “fighting the excesses” (Khrushchev’s term – translator’s note) came from the very name of the Leningrad Avenue that “refers us to Leningrad and it Moscow Avenue with its famous Stalin architecture.” On the other hand, it presents just as adequate an answer to the long-drawn Moscow search for the “new version of Stalin Art Deco”, as they sometimes call the style of architecture popular with the metropolitan buyers, and, as a consequence, with the marketing agents. Moscow has been in search for its own version of Art Deco for already 20, if not 25, years, balancing on the verge of nostalgia for the life of the Soviet elite circles, depicted in Nikita Mikhalkov movies, and New York in its “delirious” version, sung by Rem Koolhaas and adored by the fans of Donald Trump’s charisma. Moscow’s high-rises draw everybody’s attention in this sense – both vacationers on guided tours and the developers of new buildings. In addition, the Triumph Palace building, situated three kilometers down the Leningrad Avenue, one of the first examples of a “new Moscow high-rise”, will also be perfectly viewable from here.

Therefore, the Evgeniy Gerasimov high-rise is by no means the first one in the string of the search for “signature” Moscow Art Deco; unlike all of its predecessors, however, it is some sort of an “exchange” building donated to Moscow by St. Petersburg, as a curious version of propylaea between the two capitals. Thus, the task was a really obliging one. 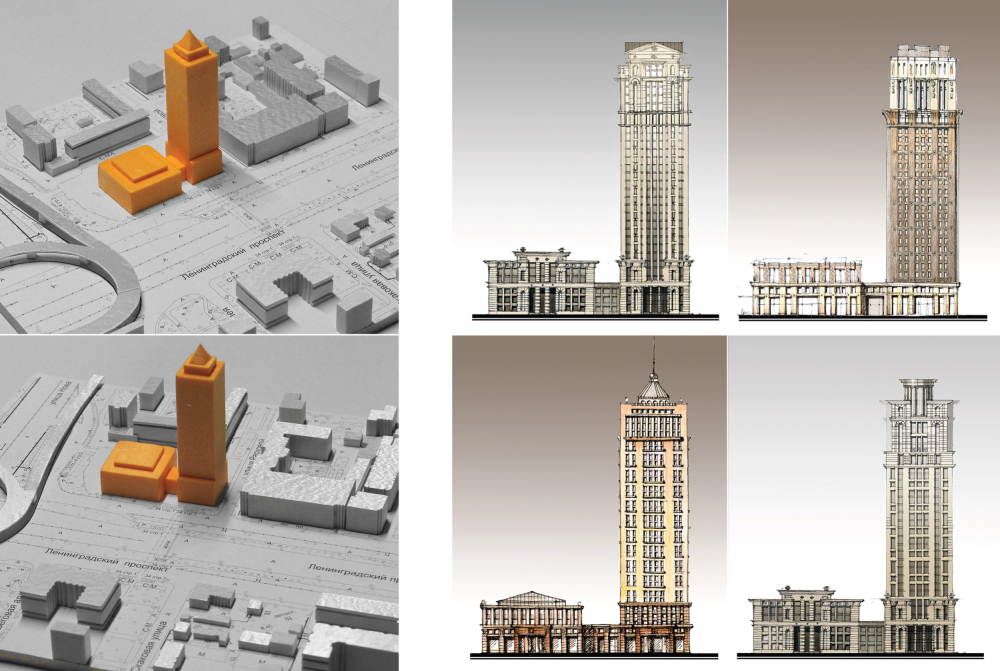 Looking for the right proportions, the architects conducted a survey, comparing the morphology of Moscow and New York high-rises built at different times. Common traits were evicted, such as tiered construction gradually tapering upwards in order to reduce the load, a spire on a tall “drum”, fracturing of the volumes in a gothic style, and light-colored decoration materials. From the visual lineup, one can see that the Alcon Tower’s silhouette is closer to the American “slender” prototypes, which, as a rule, had to be inscribed into the already dense and already high-rise construction. As for the context-based details and decor, these breathe into the high-rise a truly Moscow spirit – visualizing this building standing in New York, or anywhere else, for that matter, would be a hard thing to do. Comapative analysis of the high-rise buildings

The tower is endowed with rather complex tectonics: the three main tiers are visually multiplied to six due to rectangular volumes of different height intersecting at a right angle. Thus, the ledgy structure shows through from all the four sides of the building, two facades being flatter, and two having more prominent plastique.

Set by the building’s masses, the upward movement is enhanced due to the facade grid: while the peripheral parts of the building are blind and resemble powerful abutments, closer to the center the windows grow larger, the glass area also becomes bigger, and the piers are vertically oriented. This is one of the signs of the modern day: there were no panoramic windows in Stalin high-rises. In the upper tiers, the horizontal fracturing gradually disappears, the surfaces become smooth, and the forms crystallize. The star on top is replaced by a chunk of ice, meant to hail the temperature drop in the top of the atmosphere, where the spire supposedly reaches.

Unlike the upper tiers, the lower tiers are very rich in texture – they must be an interesting sight to look at while passing by on foot or driving by in a ceaseless traffic jam. The stylized portico, the rock-face coverage, the prominent horizontal fracturing – all of this is the response to the surrounding architectural context, which, by the giant standards of this area, makes the building look just a little bit warmer and a little bit more human-friendly. 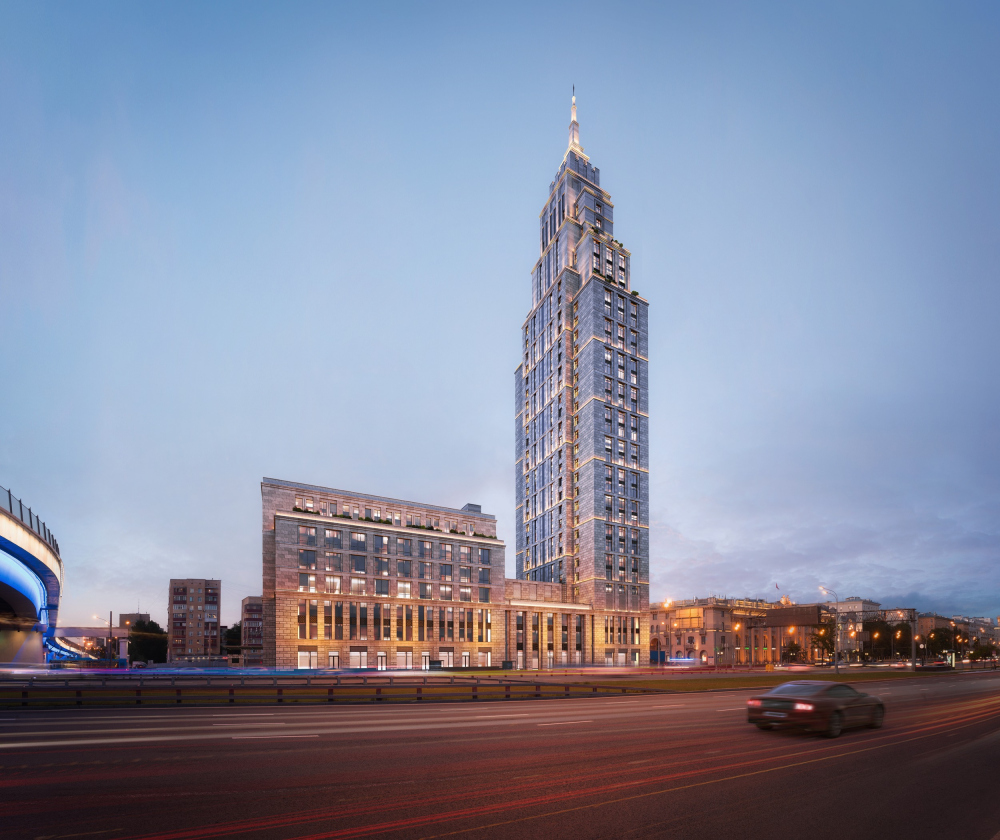 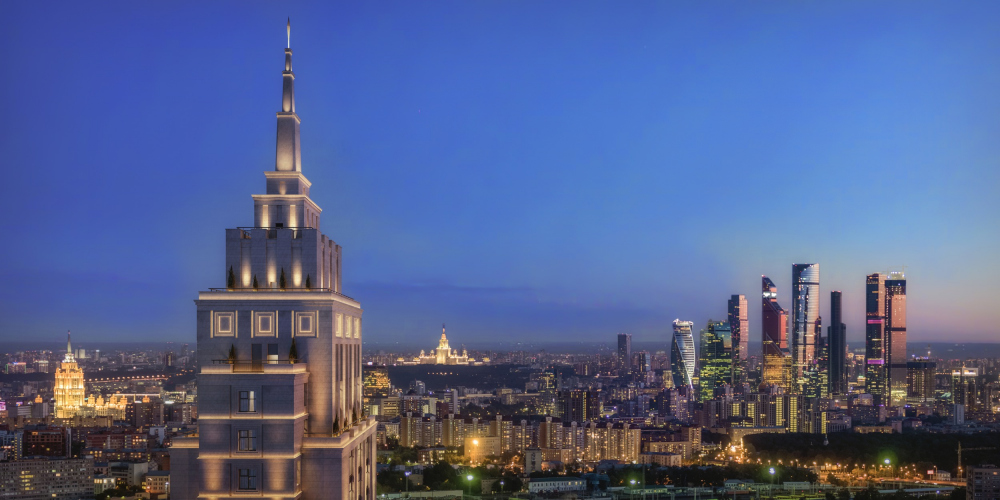 Counting the spire, the tower is 168 meters high: in the lineup of the seven Stalin high-rises, it would have been the fifth after the Moscow State University, “Ukraine” hotel, the high-rise on the Kotelnicheskaya Street, and the Ministry of Foreign Affairs. The apartments begin from the fifth floor upwards, the top floors 28-31 being occupied by penthouses with an area up to 255 Sqm, commanding the views of all the four winds. The four floor is occupied by mechanical rooms; the first three including a spacious lobby, a restaurant, a fitness center, meeting rooms, and other elements of infrastructure that usually turn the building into a small city. The volume of the business center, situated closer to the crossroads, is volume-wise resonant with both “Brezhnev” nine-story buildings standing along the Novaya Bashilovka, and the building of the “Sovietsky” Hotel that was constructed here in the early 1950’s as a high-status governmental hotel in the stead of the famous “Yar” restaurant. The laminated volume and the paneled facade of the business center refer us to a greater extent to the post-constructivist experiments by Ilya Golosov of the 1930’s than to the post-war high-rises – it is somewhat more restrained than the tower. Thanks to the choice of the high-rise typology in the northern part of the territory, the architects were able to vacate some room for landscaping from the side of the Bashilovka housing projects: along the axis of the portico of the “Sovietsky” Hotel, there will be a pedestrian promenade – possibly, with a fountain.

The Architectural Council approved the project and even pronounced it to be the best public-use project 2015. Sergey Kuznetsov described the council’s decision in this way: “we must not shy away from continuing the Moscow tradition. Both high-rise volume and the overall composition are quite appropriate.” Marking the boundary of the Third Transport Ring, the Alcon Tower will stand in row of Moscow’s centerpieces – and in this sense it will be an analogue of the Moscow City business center that is also drawn to the Third Transport Ring, just like the high-rises of the early 1950’s.

On the other hand, Evgeniy Gerasimov’s expertise in designing and constructing buildings of such style, just as his company‘a experience in achieving the high quality of execution, leaves no doubt that this tower, in spite of its scale, will enrich not only the city’s skyline bit also the space of the street.

Currently, the underground part is complete, just as the two bottom floors. The construction is expected to be finished in 2022.
Text by: , Evgeny Gerasimov
Translated by Anton Mizonov