Creative manager of the studio

Born in 1951, Khabarovsk
Graduated from MARHI in 1975
1975-1987 – worked for different project companies, Moscow
1989 – found Personal creative studio under Architect Union of Russia
Since 1995, has been the head of Studio-19 of “Mosproekt-2”
Corresponding member of International Architecture Academy
Councilor of Russian Architecture Academy and Construction sciences

Creative credo: A fine project can be introduced in a single line.

“Asadov’s architecture is complex, tense, rebellious, not without reason ten years ago he was made “our chief deconstructivist”. It was very Russian deconstructivism – soft, lyrical, romantic. Everything was being destroyed anyway, so a few broken planes over an old building were enough to make the metaphor clear. Those were the buildups and constructions that brought to Asadov great fame, and the greatest work of Moscow architecture of 1990’s is the office building on Nizhny Krasnoselsky.
Asadov went further then and started designing curved, glass and iron truly futuristic objects, adding up to his informal regalias another one – “hi-tech pioneer”. But few of them were constructed (bridges over Moscow Ring Road, control cabin over the Third Ring), and recently built MERCEDES centre on Vologodsky prospect is an absolute clear European hi-tech without particular deconstructions. Today Asadov is the head of the huge studio in “Mosproekt”, is managing about 50 large objects, as to constructing – a few large objects in Moscow and outside… (from article “Mister DeConstructor”, “Shtab-kvartira”, November, 2004) 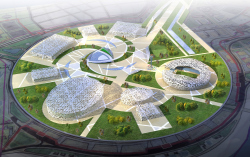 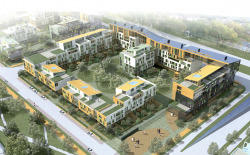 The central housing development of the “Konstantinovo” project (1 construction stage) 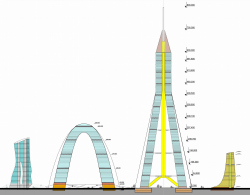 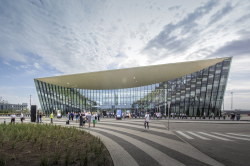 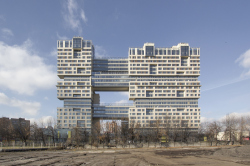 Parliamentary Center of the Russian Federation 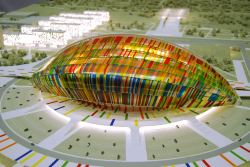 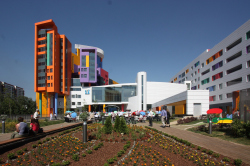 Alyona Kuznetsova. The Takeoff of a Multifunctional Approach

ASADOV architects presented a concept of developing the old airport in Rostov-on-Don. A four kilometer long boulevard stretching in the stead of the former runway and the block housing, multiplied by a wide range of business and public functions, possibly including the governmental one, will allow this area to claim the role of a new attraction point with a high level of self-sufficiency.

Designing the Sports Palace that will determine the development of the entire northern part of Derbent, ASADOV Architects turned to the architectural legacy of Dagestan, local lore, and ancient layers of history.

The project of the new terminal of the Muraviev-Amursky airport in Blagoveshchensk offers architecture based on a modular form – endowed with a special imagery, it becomes the basis both for the carrying structures of the building and the plastique of the facade, at the same time reverberating in the interior design.

The new terminal of the Leonov Airport in Kemerovo was built in record-breaking time, despite the pandemic. It became one of the important factors for the rapid development of the city, visually reflecting its dedication to the first spacewalk, both in the interiors and on the facades. Its main features are the “starry sky” effect and overall openness.
see All Archi.ru Texts / Alexander Asadov