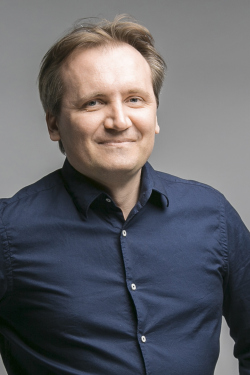 In 2003, together with Vsevolod Medvedev, Zurab Bassaria, and Mikhail Kanunnikov, Oleg founded the architectural firm “4izmerenie” (“Fourth Dimension”).
A member of the Union of Moscow Architects, Union of Moscow Artists, the winner of the golden diploma of Moscow architectural festival “Zodchestvo 2002”, “Golden Section 2004” prize, as well as other Russian and international competitions.

A bridge that looks like an ancient fish skeleton, an art object in the shape of a giant heart and no samovars or gingerbread – a contest project for improvement of the historical center of Tula from “4izmerenie”.

Alla Pavlikova. In the Rhythm of a Cruise

Another project prepared for Radisson Blue Moscow Riverside contest: the architects of “4izmerenie” bureau interpreted the form of the company’s logo and combined it with a southern resort air.
see All Archi.ru Texts / Oleg Medinsky