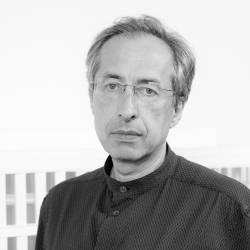 Sergei Tchoban (born 9 October 1962) is a Russian and German architect working in various cities in Europe and the Russian Federation. He is a member of the Association of German Architects (BDA), the Union of Architects of Russia and the Union of Artists of Russia, academician of the Moscow branch of the International Academy of Architecture and honorary academician of the Russian Academy of Arts, the recipient of architectural awards and a participant in various architectural exhibitions.

In 1974-1980 Sergei Tchoban studied at the Leningrad Secondary Art School, in 1980-1986 he studied at the architectural department of the Imperial Academy of Arts, formerly known as the “Ilya Repin Institute of the Russian Academy of Arts" (in the studio of S. Speransky and V. Volonsevich). In 1986 he started working at the V. B. Fabritskiy architectural studio, and from 1989 he worked in Leningrad as an independent architect. In 1991, he moved to Germany, where he worked from 1992 at the architectural firm Nietz, Prasch, Sigl in Hamburg. In 1995 he became managing partner of the bureau, called nps tchoban voss, and headed the Berlin office.  Sergei Tchoban’s designs were implemented in Berlin in such buildings as the Cubix cinema complex , the AquaDom,  the Jewish Cultural Center and Synagogue Chabad Lubavitch on Munsterstrasse, NHow hotel, Mall of Berlin complex, and the building of the Museum of Architectural Drawing (with Sergey Kuznetsov).

Tchoban was the curator of the Russian pavilion at the Venice Biennale of Architecture two times: in 2010 he curated the project “Russia Factory” (together with Sergey Kuznetsov, Pavel Khoroshilov, Grigory Revzin), in 2012 – the project “i-city/i-land” (together with the commissary of the pavilion Grigory Revzin, co-curator Sergey Kuznetsov and Valery Kashirina), which was awarded with a Special Mention – the first time that Russia won an award at the Architectural Biennale. In 2013-2014, he headed a graduate studio at the Moscow School of Architecture. 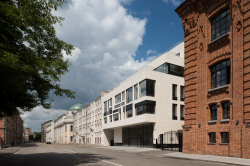 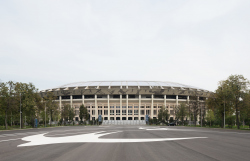 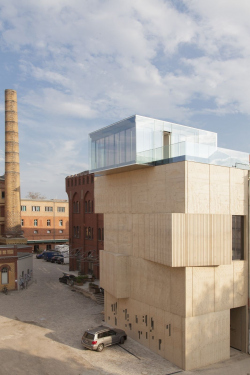 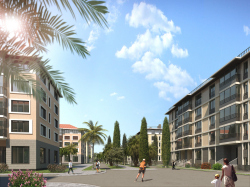 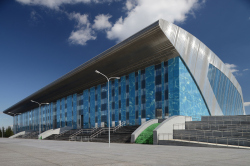 Last week, the new center for constructivist studies “Zotov” hosted its first exhibition named “1922. Constructivism. The Inception”. The idea of creating this center belongs to Sergey Tchoban, while the project of the nearest houses and adjusting the building of the bread factory for the new museum function was done by the architect in collaboration with his colleagues from SPEECH. We decided that such a complex project should be examined in its entirety – and this is how we came up with this long-read about constructivism on Presnya, conservation, innovation, multilayered approach, and hope. A few days ago journalists were shown the building of Bread Factory #5, renovated upon the project by Sergey Tchoban. In this issue, we are publishing Grigory Revzin’s thoughts about this project.

Julia Tarabarina. ​The Slabs of Bagration

The construction of a new skyscraper designed by SPEECH within the complex of Moscow City has been announced. A keen observer may see in it: Moscow high-rises, Chicago architecture, Malevich architecton, and an attempt of deconstruction of the integral image of the Moscow skyscraper – a technique that has been actively employed by the architects in their recent works.

The Beams of Energy Effectiveness

On August 22, Berlin saw an official opening of the new HQ of the energy company Vattenfall, the office complex named EDGE. One of its buildings is Germany’s biggest wood hybrid building. The term means that its supporting frame is made of glued timber, but in certain places wood cooperates with metal, reinforced concrete and fiberglass. Below, we are sharing about the inner design of this structure, not just environmentally friendly but energy efficient as well.

Julia Tarabarina. Inside Out: Pavilions of Eternity

The reconstruction of the warehouses of the Spit of Nizhny Novgorod – they opened in the beginning of June as concert and exhibition halls – became, without exaggeration, the event of the year, both in the field of culture and architecture. Their story seems to us to be extremely attention-worthy from the point of view of discovering, researching, and protecting this monument to engineering thought of the 19th century. At the same time, the solution proposed by Sergey Tchoban on how to adjust and how to expose these structures is as relevant as it is bold and unconventional – on the edge of temporary, timeless, and eternal.
see All Archi.ru Texts / Sergei Tchoban