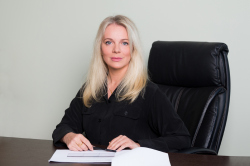 Alexandra Kuzmina is one of the two founders of Mezonproekt.
Alexandra was born in 1977 in Moscow.
In 2000, Alexandra graduated from Moscow Architectural Institute – MARKHI. Alexandra is a member of the Union of Moscow Architects.

In 1999, in partnership with Ilia Mashkov, Alexandra founded the architectural company “Mezonproekt”. She is a coauthor of more than 70 projects and a member of international project teams.
Since 2014, Alexandra reads a course in Moscow Architectural Institute – MARKHI.
Since February 2015, Alexandra is the first deputy head of the Committee for Architecture and Urban Planning of Moscow. 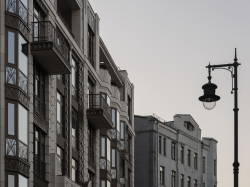 The high-end residential development in the Vsevolozhsky Lane features a combination of expensive stone and metal textures, immersing them into a feast of ornaments. The house looks like a fantasy inspired by the theater of the Art Nouveau and Symbolism era; a kind of oriental fairy tale, which paradoxically allows it to avoid direct stylization and become a reflection of one of the aspects of modern Moscow life. 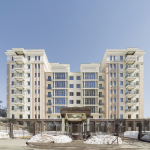 The high-end residential complex “Aristocrat” situated next to a pine park at the start of the Rublev Highway presents a new stage of development of Moscow’s decorative historicist architecture: expensively decorated, yet largely based on light-colored tones, and masterfully using the romantic veneer of majolica inserts.

Lara Kopylova. Under the Canopy of Pope of Rome

Mezonproekt has built a new studio for the renowned sculptor Zurab Tsereteli inside the yard of the house on the Pyatnitskaya Street, across from the Church of Clement, Pope of Rome. Soft eco-modernism met some Art Deco features. 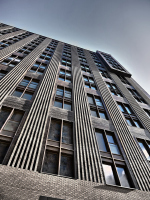 Designed by Alexandra Kuzmina, Ilia Mashkov, and Andrey Kolpikov, this house within ZILART residential complex seems to solve the eternal struggle of vertical versus horizontal, bringing the controversy to a minimum. The house is reminiscent of this factory’s golden age of the 1930’s.
see All Archi.ru Texts / Alexandra Kuzmina