The area in which the construction site is situated is a "borderline" one, lying behind the railway station. Comparatively close to the land site in question, the "block" Stalin-era houses that constitute the city center give way to the railway station's industrial park. On the other hand, there is also a chain of wooden two-story houses of the early XX century nearby; on the west side, there are two residential towers of the seventies. The area of the rectangular site is seven hectares - but almost half of its territory is unfit for construction: from the west, there are residential buildings that you cannot cast shadows on, and on the north the site borders on the railroad line protected area. What is left is a strip of land a little under four hectares into which, besides the housing, the architects were supposed to squeeze a kindergarten, office buildings, shops, and fitness centers. In the course of the design phase, the complex had to shrink even more due to the face that a new highway was being built along one of its edges. After that, the height of the buildings increased up to 25 floors resting upon a stylobate. 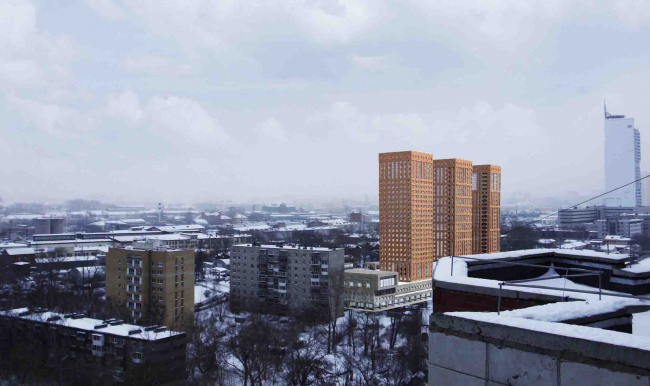 The complex consists of two towers of a rectangular plan and one elongated "slab" building. All the buildings have an equal height and grow from a single stylobate that occupies almost the entire construction site. The 25-story "slab" building looks like an impregnable fortress wall that marks the border of the land site and forms the construction front of the street. The two towers stand perpendicular to the elongated house and, together with its narrow sidewalls, give the street a certain direction, marking yet another border of the land site and forming an independent yard on the inside. This yard, with tall railings running along its border, rests on the stylobate's usable roof: this place will get tennis courts and playgrounds. The left part of the yard has a dedicated area for the kindergarten to be built in, with a green territory of its own. The volume of the kindergarten towers over the stylobate but it is still designed in the same style with it. The first floors of the residential towers will get their own parks on the stylobate's roof, directly accessed from the apartments. 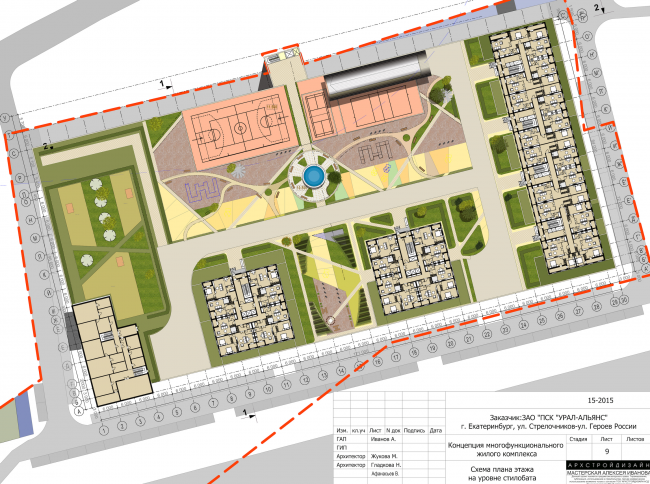 Multifunctional residential complex in Ekaterinburg. Plan of the floor on the stylobate level © Arkhstroydesign The architectural image of the complex is based on the authors' interpretation of the classic tradition: one can clearly read the base, the dress circle, the typical floor, and the attic. The large shop windows of the second floor invite people to come into the shops, drugstores, offices, and the fitness center - all of these will be housed in the ground floor. Besides the public functions aligned down the street, the stylobate has a three-level parking garage inside of it. There is no underground parking garage here because the digging earthworks are prohibitively expensive in this case.

The design of the multilayered façades looks very reserved and is dominated by warm chocolate and terra-cotta shades. The brick forms the base and the framework under which a slightly deeper layer is hiding that consists of the latticed railings of the balconies of a soft coffee shade of color. These railings give particular exquisiteness to the pattern of the windows. The picture is completed by the background layer of smoked glass windows. Although the residential complex visually sets itself apart from the city, it does not in the least refrain from interacting with it. The building can be accessed directly from the street, for with end-to-end hallway entrances are provided. Special attention is paid to the concept of underground crossings, public transportation stops, and the organization of sidewalks that will connect the new complex with the neighboring houses that are under construction. This way, as the authors of the project claim, they were able to create an optimum economic model capable of satisfying both the client and the city, as well as give an impulse for developing the territory still further. During the pre-concept phase, the city proposed to develop the layout of the neighboring land site, the industrial park of the Russian Housing and Development Foundation adjoining the "main" land site from the side of the Chelyustkintsev Street. "Arkhstroidesign ASD" proposed a graceful idea of a little park that comes out to the historically formed housing and the new residential buildings on the Geroev Rossii Street. Aleksey Ivanov notes that the park promenade unites the housing projects on both sides of the street, while the park becomes the central recreation place for both new residential projects and the long-existing houses.