Snowy Peaks of the National Bank

For Kazakhstan's capital, the architects of "ARKHIMATIKA" Bureau designed a new building of the national bank in the shape of a snowy mountain range. 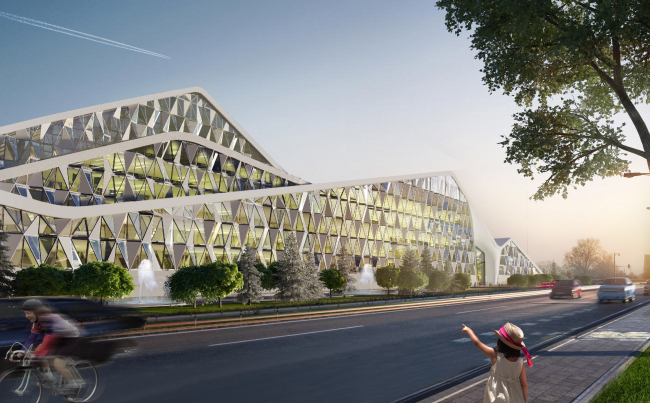 Astana, the capital of Kazakhstan, is getting ready for EXPO 2017, the world's major trade show that will this time around be dedicated to alternative energy sources. Highways and railroads are being built, as well as infrastructure projects and new residential buildings. The preparation plans include erecting a new building of the national bank. Today, the nation's main bank is situated in one of the central districts of the capital, on Beibitshilik street, in a building whose architecture does not quite correspond to its status and the ambitious plans of the dynamically developing city. So, one of the largest construction companies of Kazakhstan, BI Group, that does the main bulk of the work of preparing for the world's main trade show, turned to the Kiev construction company "ARKHIMATIKA" with a request to develop the concept of the new building of the national bank. 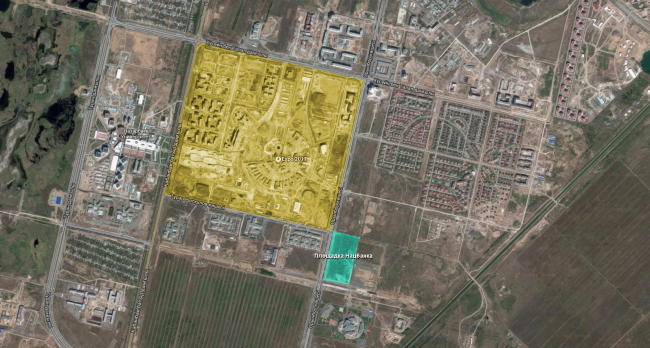 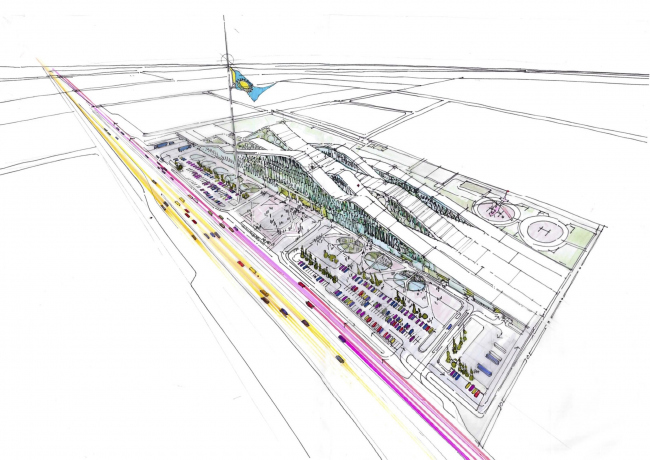 The construction site is located in a new district. It stretches along the yet-empty but actively developing street called "Novy Orynbor", not far away from the capital's airport - the regular rectangular site, not constrained by any surrounding buildings or any other restrictions. According to the authors, Dmitry Vasilyev and Alexander Popov, they immediately felt a desire to create here a memorable skyline that would not pass unnoticed in the cityscape. The architects are convinced that Astana is in a dire need of "mountains": while in Kazakhstan's former capital, the city of Amaty, the buildings stood out against the background of a majestic mountain panorama, the new capital cannot boast either a dramatic mountain skyline or even a hilly landscape - there is nothing but a boundless plain stretching as far as the eye can reach. Although the new business center gets more and more high-rises each year, they - due to their vertical proportions - form rather a "forest" that enhance the flatness of the land with their sheer height; in order to create a building that would really look important in this environment, the last thing you want to do is building yet another "tree trunk". What you need to do is use your architectural techniques to "cancel the horizontal". This is how the idea came about to build the new bank building in the form of a mountain range. 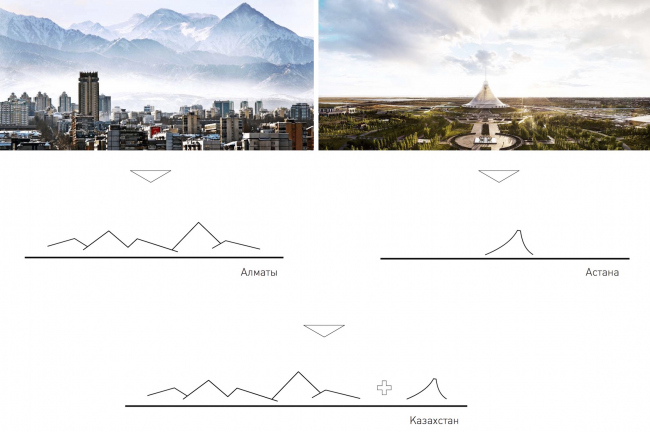 The shape of the future "mountain range" crystallized by degrees. Initially, the architects placed on the construction site five imaginary elongated "slab" volumes. Following this, they carefully distorted the upper outline of each of the slabs turning them into a semblance of the silhouette of a mountain range. The height drops turned out to be significant: the terminal height of the buildings at the upper points amounted to ten floors, the minimal height at the lowest points being one. At the same time, the architects were able to keep the impression of five independent elongated volumes: the side volumes were grouped into pairs like slabs superimposed on one another, while in the middle, as if in the crevice between the mountains, there is a broad and not-too-tall atrium unit that also sports a wavy "mountain" silhouette on top of its own peak. Such arrangement was dictated by both the geometry of the land site and the necessity to distribute the set of functions over different zones. The two further blocks became administrative ones. In the central part, besides the multilevel atrium, the architects were able to find room for large conference halls, halls for mass events, cafés, and restaurants - catering both for visitors and employees of the bank. In the underground part, there is a parking garage.

Peeking from the backs of one another, the asymmetrical "peaks" form a silhouette that indeed looks like a mountain range when viewed from a distance. In addition, the elevation drops help uncover more of the city panoramas - at least, the front buildings in their upper tiers obscure less of the volumes receding into the depth of the land site. 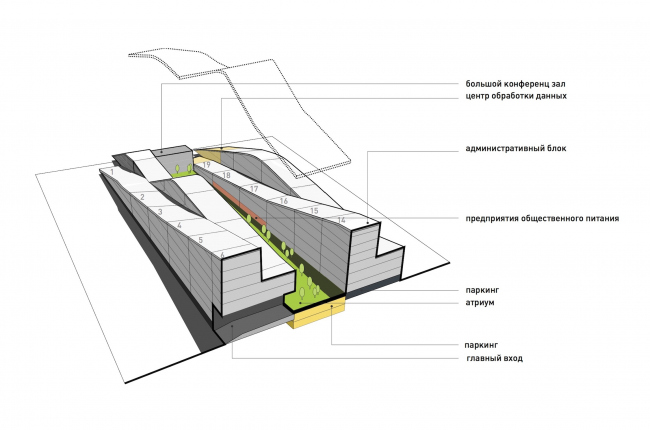 Supporting the main story line, the architects subjugated all the façades of the complex to a single pattern of prominent diamond figures two stories high that resemble the texture of issuances of rock material sliced vertically. The effect is achieved by combining dull, transparent, and semitransparent panels. The dull sections will be made of fiberglass concrete, the same materials being used for the sloping roofs; the dazzling white material will look a bit like hard-packed snow. The "snow caps" are sometimes shifted a bit off-center, and at places they even "fall down" - almost like avalanches. 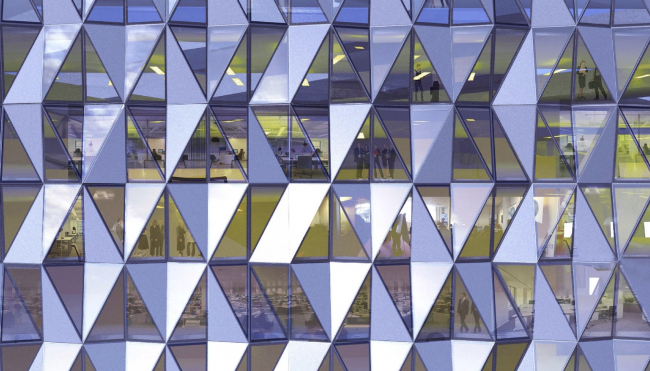 The main façade displays a particularly prominent "avalanche" - the white "flows" flank the portal of the grand entrance. There is a spacious city square in front of it; the entire territory at the foot of the complex is turned into a green landscaped area. The building is separated from the traffic way by the strips of parking lots and the public transportation stops. Behind them, there is a wide sidewalk hidden in the shadow of the trees planted along the street. The string of dry fountains is meant to create a joyous, almost festive atmosphere. And the street furniture in the light of modern street lights will give the whole area a cozy and homely feel.

Regretfully, today, all the coziness is only there on the visualizations created by "ARKHIMATIKA". The authors confess that they have no information as to the further destiny of the project, although there is still a possibility that we will see the peaks of Kazakhstan's national bank as early as in 2017.
Text by: Aleksandr Popov, Dmitriy Vasilyev, Alla Pavlikova
Translated by Anton Mizonov