The project of renovating "Belgrade" Hotel will turn it into a practical and fully-equipped facility, at the same time carefully preserving the recognizable style of the soviet modernism - and will even restore the symmetry of the Smolenskaya Square. The new year saw "Belgrade" Hotel, built back in 1976 in pair with its "twin" tower on the Smolenskaya Street, shut down for reconstruction with an accompanying closing ceremony. The very fact is a precedent in itself - because normally guests and reporters are invited to an opening ceremony of something. In this case, however, people were invited to close this facility, see one of its walls publicly torn down, walk around its now-deserted floors, peek into the soviet-era rooms with light bulbs screwed out and furniture partially taken out as well, but nonetheless commanding the same magnificent views of the Moskva River and the high-rise of the Ministry of Foreign Affairs nearby. The hotel in its original condition - and it must be noted at this point that ever since it was built, the building was never remodeled - was seen by the crowd for the last time. On the 15th of January, the construction work began. Project of renovating "Belgrade" Hotel. In the panorama of the Smolenskaya Street. © T+T Architects The project of reconstructing and changing the plan of the hotel with regard to the requirements of the well-known Azimut Hotels chain was developed by the Russian company "T+T Architects". The first thing that the architects had to take into consideration was the importance and the very specifics of the hotel's location - on one of the city's main squares. The Smolenskaya Square was formed in the first half of the XX century, its main centerpiece being the high-rise of the Ministry of Foreign Affairs. Built in 1976 and 1973 respectively, and flanking the square from the west, the two identical towers of the hotels "Belgrade" and "Golden Ring" were meant to complete the architectural ensemble as two giant propylaea, a grand entrance to the Stalin high-rise. The high degree of "involvement" of the building with the context made the architects refrain from the idea of making any radical changes to its architecture, even though some of the early versions of the project provided for significant changes. The long-term work inside the company and interacting with Moscow's numerous municipal agencies (the project, among other things, had to get the approval of Moscow's architectural board) helped find the best possible solution that was focused on the preservation of the historical look of the modernist high-rise. The rhythm, the texture, and the colors of the façades, the fenestration, and the integrity of the overall composition - the architects were to keep all of these intact, at the same time updating the building and breathing a new life into it. As for the "old" walls with their prominent vertical pattern and the signature "rib" feel, the architects decided to reconstruct them very delicately, changing all the old materials with the new ones, up-to-date and technology friendly. For example, the existing structure of aluminum cross-beams with multiple glass units will be changed to new glazing of varying transparency but of the color identical to the original. In the dull sections, the architects are planning to use blacked-out glass with a soft shimmer, while in the rooms it will be fully transparent high windows commanding panoramic views of the city. The piers between the windows will be coated with tinted glass panels that will also repeat the structure and the color of the finish of the building. In addition, by using extra decorative vertical lamellae, the architects proposed to give it a more slender and upright look. The first floor will be covered by new stained glass made from refined glass of particular transparency. Only the stone pylons that flank the bottom part of the building will be left in their places. They will be renovated, cleaned from the dirt and the streaks, and the cracks in them will be fixed. These massive, slightly concave pylons of natural stone will become one of the most palpable reminders of the authentic history of this building, its material fragment from the 1970's, clearly readable from a comparatively close range. 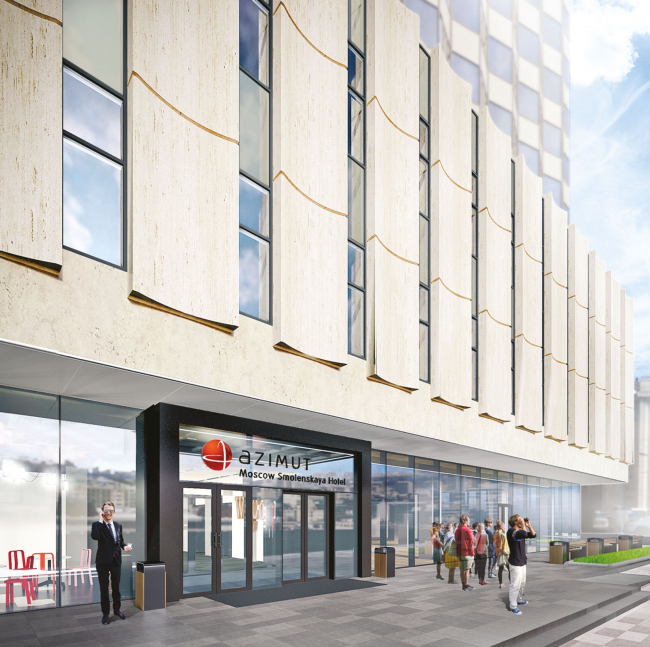 Project of renovating "Belgrade" Hotel. The entrance group without the marquee © T+T Architects

The top part of the twenty-floor high parallelepiped will get a two-story glass buildup with an elliptical plan. This is the most noticeable addition of all that are made in the course of this reconstruction, and it is necessitated by the fact that the twin tower of "Golden Ring" hotel got such a buildup as early on as in 2003, and the new glass volume over "Belgrade" will only restore the symmetry of the architectural ensemble. But then again, the architects themselves confess that if they had not had to take into consideration the already existing buildup over the neighboring tower, they would have opted for a rectangular plan - such an option was even proposed in one of the early versions of the project.

Inside the glass buildup, there will be a restaurant commanding panoramic views of the city and the Moskva River. The vacant part of the roof around the ellipsis will also be made usable - with the restaurant's summer terraces and sightseeing platforms. In addition, the buildup will include small stores, a fitness center, and a cafe. Yet another important task for the designers was accentuating the grand entrance to the hotel. Today, finding it is no easy feat - there is neither marquee nor sign, the doors mixing in with the background of the first floor. In order to repair this significant omission, the authors proposed to mark the entrance with a broad black frame of the rectangular portal - such an accent would not go unnoticed against the backdrop of refined glass with minimal joints, opening up the view of the hotel lobby. The architects also proposed to cap the entrance with a semitransparent faceted marquee - although the implementation of this particular element is still to be discussed. The inside space of the hotel that, when remodeled, will claim four stars instead of today's three, will also change significantly. The engineering lines will be all replaced with new ones. The basement will get a new parking garage. All the premises, including the entrance lobby with its grand staircase and the conference halls will be brought to meet the requirements of the new hotel chain operator.

At the example of "Belgrade", the customer is looking to implement the concept of a smart-hotel, its priorities being functionality, laconism, and modern technologies. For this reason, the rooms will get equipped with new high-tech gadgets, the entrance lobby will turn into a co-working zone where one can enjoy a cup of coffee or organize business meetings 24/7. The second floor will be occupied by retail stores. At the expense of developing the floors that are unused today, the architects will be able to boost the number of hotel rooms from 236 to 474. One of the floors will be exclusively occupied by six large conference halls. In a word, keeping the recognizable features of the building's historic identity of classic modernism, the renovated "Belgrade" promises to become a comfortable, state-of-the-art, and quite reasonably priced city hotel with an attractive location. The renewed building is expected to open by 2018.
Text by: Sergey Trukhanov, Polina Voevodina, Alexander Brovkin, Alla Pavlikova
Translated by Anton Mizonov 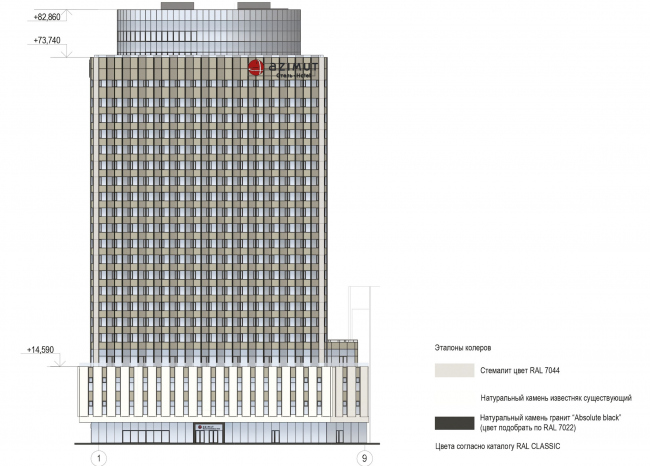 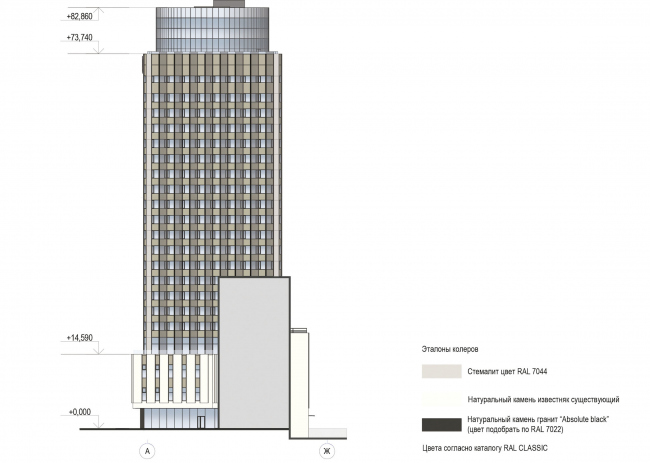