Lace pattern of the future

“Yevgeny Gerasimov and Partners” architectural studio in Vyshny Volochyok got "Paris Commune" factory. The architects placed a conference center, hotel, apartment house and an art school on its territory.

"Paris Commune" - one of the remotest fabrics from the center of Vyshny Volochyok. It is located on the picturesque Tsna river bank and with the nearby Uspeniya Bogoroditsy Church (1864-1868) are the oldest constructions in the district, which in the 20th century was built up with paneled houses. Evgeny Gerasimov said that from the very start their decided to save the historically valuable environment building modern object and without mimicry and copying it. "We based our project on the contrast while it is common to use the principle of similarity constructing in a historical area, - says the architect, - and instead of blind copying tried to reconsider the fundamental principles Vyshny Volochyok architecture and complement it with iconic buildings of the21th century".

To implement their aesthetic program, the authors save only buildings of 19th and early 20th centuries and demolish numerous constructions of the Soviet period and barracks. But being true Petersburgers “Evgeny Gerasimov and Partners” form a new, geometrically elaborated system of axes on the territory and add a front pedestrian square. It is located right on the cross of new streets, one of which runs parallel to the Tsna river, the other joins the factory with and the church and water areas. Entrance to the square from one of the busiest streets Steklozavodskaya is decorated by “Propylaeum” - informational pavilions, and its paving pattern is similar to fabric patterns the"Paris Commune" had been manufacturing.

According to the authors, the square combines the "past" - beautiful constructions of the textile factory (they now house hotel and lofts), and the "future" – a clear geometric volume of the congress center and art school bionic forms. Interestingly in the architecture itself theme of the old and the new is frequently highlighted. New volume of the central atrium is cut into the main factory building, the art school consists of welded together red-brick rectangle of a concert and exhibition hall (former bath houses) and egg-shaped on plan building housing classrooms. “Insert” of the main building is faced with glass, and façade of the school is decorated with laced architectural concrete, pattern of which includes traditional Tulskaya region ornament.

Clear and strict structure of the square is set against the smooth lines of promenade embankment which is step-wise goes down to the river. Fitness centre building closes the embankment area and is also egg-shaped on the plan. It is "hidden" in the relief of the embankment and not only emphasizes natural line of the bank but also is its retaining wall. Flat roof of the fitness center will be landscaped and become a new town small garden.

Working on the project the architects kept to the terms of technical enquiry. Yet there were some innovations made. In particular, “Evgeny Gerasimov and Partners” suggested the idea to build an apartment building on the territory of the reconstructed factory. Actually, there is an apartment building for factory worker, - says Evgeny Gerasimov – And we decided the social mission of the project will not be complete if we can’t leave people without home. So we saved the building, but replaced to provide its dwellers with better living conditions. " 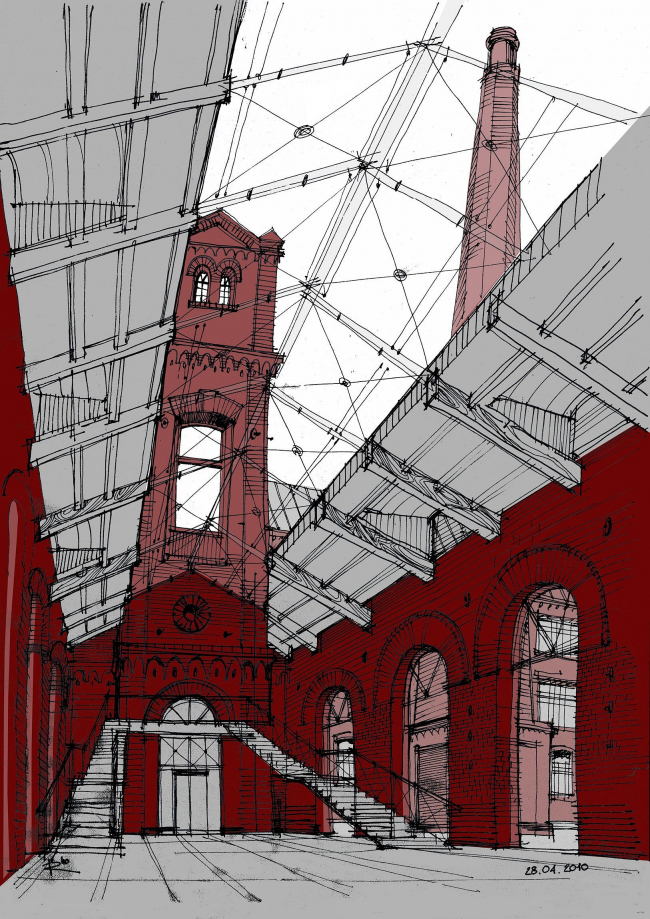 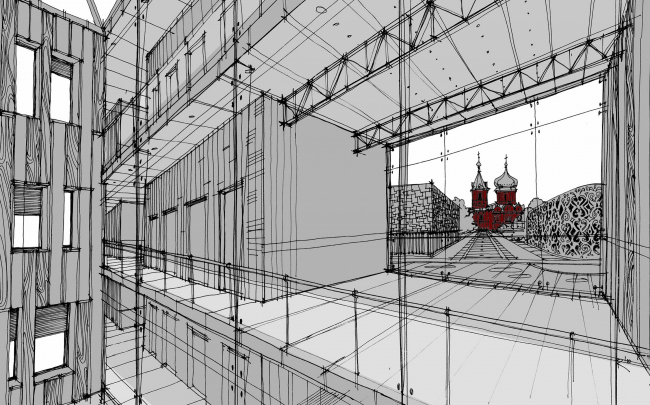