In the Ukrainian city of Lviv, the firm “Archimatika” built the city’s first business center with a BREEAM certificate. Thanks to their ingenious solutions, the architects were able to make the building both aesthetic-looking and energy-efficient and cut down the energy consumption by almost 40%. The business center “Optima-Plaza” was launched into operation in 2016. According to the BREEAM method of assessing, rating, and certifying the sustainability of buildings developed by the British company BRE, it was rated as “very good”.

The complex is situated in the south part of Lviv, at the crossing of Nauchnaya and Knyagini Olgi streets. On the one hand, this part of the city is notable for its highly developed infrastructure: the Knyagini Olgi Street alone has five shopping malls standing on it with an aqua park in the middle. “In addition, they are actively implementing the “smart city” technologies here: they put up the Wi-Fi towers here, make gadget charging points at the public transport stops; they introduced a reward system for sorting of household refuse, and there is a system of public notice about vacant parking spots” –the cofounder of Archimatika, Dmitry Vasilyev, elaborates on the topic. On the other hand, the organization of space is still far from friendly environment as we know it.

The developer turned to the architects with a request to comment on the already existing project of a business center with a corridor-type layout. “We analyzed the linear plan proposed by our predecessors, showed to the developer the place where the corridor would run, and he saw just how inefficient it would be. Such a planning solution for the office building is morally outdated, and no financial investments would save the situation”. Ultimately, Archimatika decided to come up with a project of a fundamentally new business center which would meet the requirements of our time not only by its formal outward qualities but also in its essence.

The architects were able to break away from the outdated linear architecture by breaking the single composition of the building into three independent volumes which give the building a rhythmic quality and go a long way to alleviate the impression of the building being excessively elongated. The side façades of each of the volumes are covered with metallic panels, while the north and the south façades sport panoramic glazing, forming a fashionable technique of “wrapping up the shape”, accentuating the contrast between the longitudinal and the traversal. On the roof of the podium between the three volumes, there are deep terraces with living trees. The risalits (i.e. projections) step out as deep cantilevered structures; between them, terraces are formed - all together it falls into a space play that totally eliminates the "flat" perception of the facade. "Optima-Plaza" office complex © Archimatika "Optima-Plaza" office complex. Trees on the terraces between the projections © Archimatika

The end-to-end panoramic glazing of the south façade is accentuated by the horizontal metallic lamellae of the shading system – they help to combine beauty and energy efficiency, protecting the offices from the summer heat and providing extra insolation in winter at the expense of special parametric features calculated by the architects. Similar lamellae are installed on the side façades as well: here they also protect the windows from direct sunlight but they form verticals instead of horizontals. 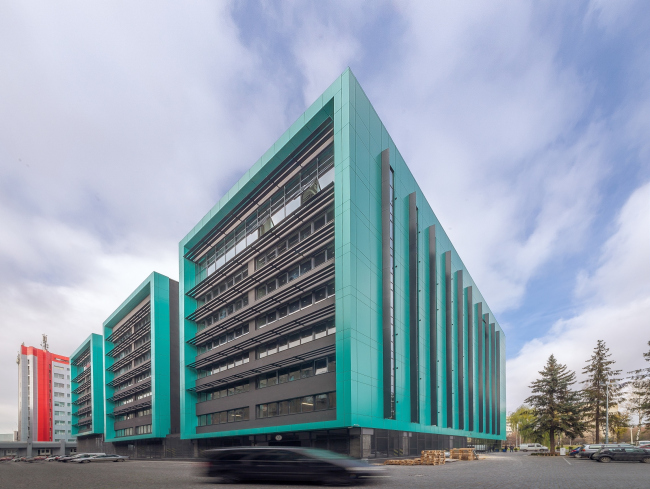 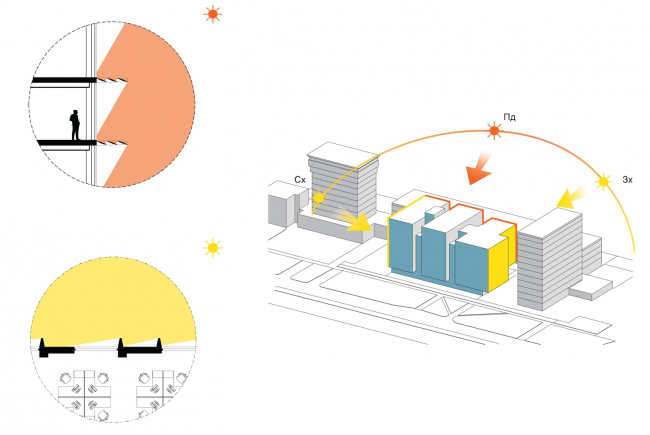 The main tone of the façades is copper oxide green. “Originally we considered a reserved and businesslike gray tone for our color solution. Our client was good to go for it but then it seemed to us terribly boring. All the nearby buildings are this bleak gray color, finished with cement stucco. We wanted our building to be different from the soviet heritage and look fresh, all the more so because there are birch trees in front of it that create a great background. We decided to support the green color but to use a colder shade which better fits the implied function of the business center” – says Dmitry Vasiliev. In the center of the north facade that faces the street, the lobby entrance is accentuated by the cantilever of the central rislait. "Optima-Plaza" office complex © Archimatika

One tier of the underground parking garage is added by a parking garage on the first floor from the yard side. On this side, the façade of the podium is covered with a metallic mesh which helped to provide natural ventilation and cut down on the expenses on installing the smoke exhaust system. The facade that faces the yard and the slab of the soviet building of the Academy of Sciences (on the left). On this side, the podium hosts a parking garage; the glazing gives way to metallic bars. "Optima-Plaza" office complex © Archimatika The north part of the podium is occupied by cafes and shops, the south part (facing the yard) hosts the parking garage. "Optima-Plaza" office complex © Archimatika

The useful area of the premises at each of the floors is about 1900 square meters. This is the optimum area for comfortable work of employees of a large company. The tripartite division of a floor into blocks helps to divide the space into smaller office units. On the roof of “Optima-Plaza” there is system of photo-voltaic arrays whose power is enough to provide hot water to the entire business center. The water is heated up by an air source heat pump that also helps to heat the building if the temperature stays above –5 degrees centigrade. In the course of designing “Optima-Plaza”, Archimatika used these techniques for the first time around.

The architects also took care about public spaces: left and right of the podium’s lobby, there are spaces for cafes and shops that will help to make “Optima-Plaza” not only a comfortable place to work at but also a gravity center for the local people. Development of the district’s infrastructure will also be boosted by bicycle parking and the electric car charging stations that the architects designed next to the business center. The authors are sure that the building will raise the bar for the development of office property not only in Lviv but for entire Ukraine, corresponding to the ideas of “creative class” about comfortable life in the city.
Text by: Aleksandr Popov, Dmitriy Vasilyev,
Translated by Anton Mizonov 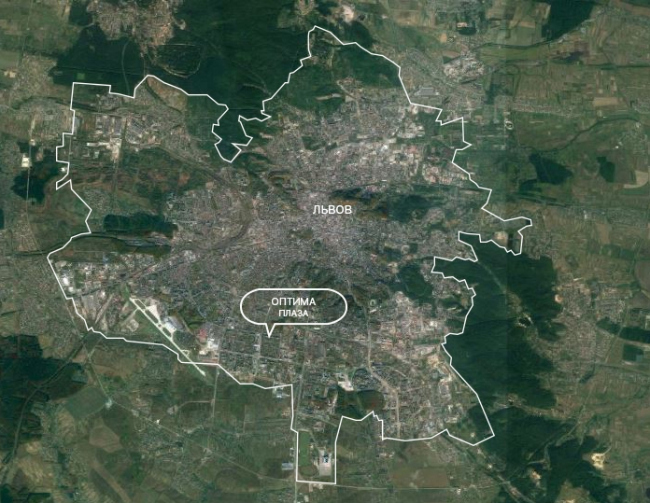