​Vis-a-vis with a Park

The contest project that the “Gran” firm prepared for the Malaya Trubetskaya Street in Moscow is based on the author’s vision of what a club house may look like amidst dense and high-profile surroundings. The two units are designed as volumetric frames of apartments overlooking the park. This land site, located in the very midst of the Khamovniki District, right across from the Mandelstam Park and the Trubetskoy Estate, is definitely a spot for which a lot of architects would love to design – but one which needs to be “showcased” in the right way. Literally the next but one project is the “Sadovye Kvartaly” (“Garden Quarters”) housing complex with its modern and vivid architecture, quickly developing infrastructure, and high-quality living environment that promises every comfort in the world to its inhabitants: a creek, a landscaped in-block area, and multilevel green yards. How can one possibly hold its own against such a gorgeous neighbor and its exuberant lifestyle? Only aristocratic existence as a mansion inside a members-only “club” – and, given the small allowable square footage and height, a club house becomes pretty much the obvious choice by default. In this case, the developer sells not so much square footage as the housing format: the bliss of solitude in the center of the city. And, if we are to draw a parallel between a densely populated city block and a bustling “royal court”, then the club house may definitely claim the status of a “royal residence”. The “royal residence” must, of course, offer every comfort as well: a swimming pool, a fitness center, and retail zones which could cater for the residents’ needs and – at the expense of the rent pay – the maintenance costs as well. Even the range of apartment plans does not matter that much in such a situation, although no one can reproach the project for its “unthought-out” apartment plans. First of all, however, the architecture must live up to its format, and the “retinue” that makes the “king”.

Thus, the developer announced a competition – also of a “club” type, i.e. a closed competition for selected companies. What became the “membership charge” was a serious, although habitual for any architect, task: the dense surroundings set forth strict requirements in terms of lighting, insulation, and visual properties. In order to meet these requirements and at the same time organize a convenient driving access to the building, the “Gran” architects developed the elongated site depth-wise, designing the building in the form of two volumes that are shifted in respect to one another to such extent that they almost do not overlap with or obscure each other. At the same time, the further unit is 5 stories taller (13 as opposed to 8) and is connected to the closer one with a single-story podium. In addition to all the public, maintenance, and management premises, including the sales office and a swimming pool, this podium also contains a spacious entrance lobby. On the outside, the entrance zone is just as spacious and is covered by a powerful cantilevered structure. This large cantilever – which has already become part of the “signature style” of the leader of this firm, Pavel Andreev – also covers both the closest entrance from the Trubetskaya Street, one that leads to the office part, and the glass doors which are hidden in the depth of the podium and lead to the private and main residential parts of the complex. One can drive up here, exiting from the Trubetskaya Street and driving along the side end of the neighboring “wavy” building. And, moving in the same direction and turning left, one will find himself at the entrance to the underground parking garage.

On one side, the building borders on the HQ of the Aleksey Vorontsov bank, a building erected in the early 1990’s. And the “wavy” house is nothing other than the comparatively new housing project by Sergey Tkachenko, the result of his creative search of the 2000’s. These neighbors are also pretty far from “modest”. However, according to Pavel Andreev, the only way he responded to their architecture was design most of the apartments in such a way that they only “look” upon these two buildings with their kitchens and bedrooms. The living rooms, on the other hand, command park views – virtually the way it is done on New York’s Manhattan. From the opposite side, the windows... also overlook a park – the one that does not exist yet but which the architect asks the developer to make.

Thus, the usable roof of the podium is chiefly about caring about the upper residents. Nevertheless, the exits to the roof and the green landing are provided from both residential sections and the entrance lobby. The windows that overlook the improvised park are located no less than 2.5 meters above the roof level, so those who love to roam the roofs will not disturb the residents in any way. But then again, the true fans of “walking up high” will be sure to choose one of the penthouses that crown each of the units. These two include covered private terraces, full of air and sunlight, even though, when viewed from the outside, they look like regular floors with panoramic windows. This is basically the way with this building: following the “seclusion” principle, the authors packed into a “laconic” box all the numerous functions, technical solutions (including the staircases, underground equipment, and the equipment in the top penthouse part), and the conceptual meanings as well, come right down to it. But they did it in such a way that the insides show through now and then – through unexpectedly elegant ornaments on the framing that show through when the backlighting is on (these can be both metallic panels and Corian bands); through protruding balconies appearing now and then on the sides, through hatches in the terraces’ roofs, which let trees out and let the sky back pouring in. 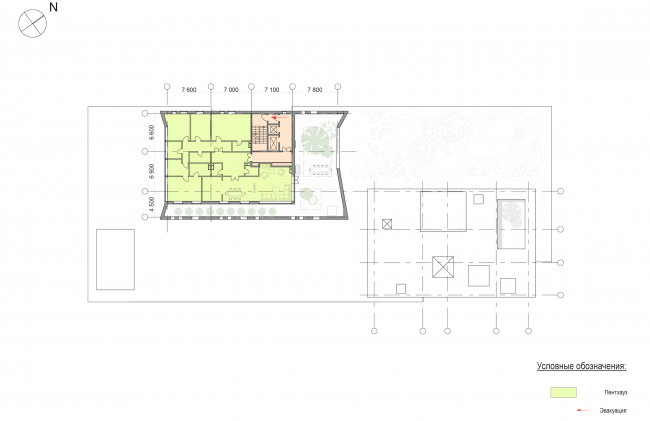 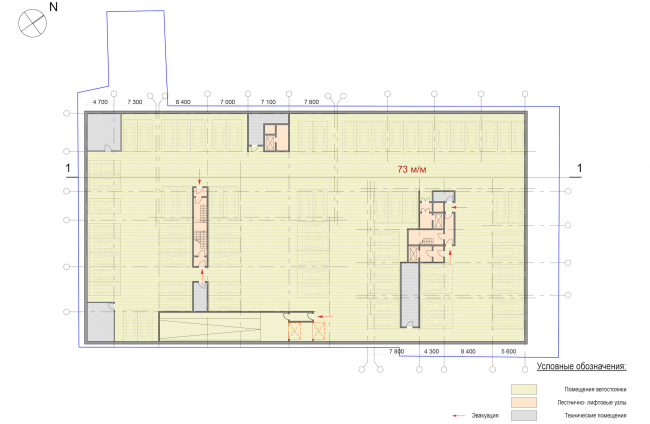