The Moscow-area town of Zheleznodorozhny is going to get a new shopping center designed by "Arkhstroidesign". For Aleksey Ivanov, this is already his second attempt to get his project implemented on this land site.

The team of Aleksey Ivanov already worked with this site once - a wasteland locked inside an overbuilt residential area of Moscow area's Zheleznodorozhny lying next to the Nosovikhinskoe Highway. More than a decade later, the same client, directed by the city council, again turned to "Arkhstroidesign" - the city administration remembered the previous project as the most convincing architectural proposal for this site which, it must be noted, significantly shrank lately. The client came to Aleksey Ivanov with a request to create a new bright image, capable of making its monotonous surroundings come alive - which became the key element of the project specifications, barring, of course, the requirement or getting a 6000 square meters of public and retail floor space. 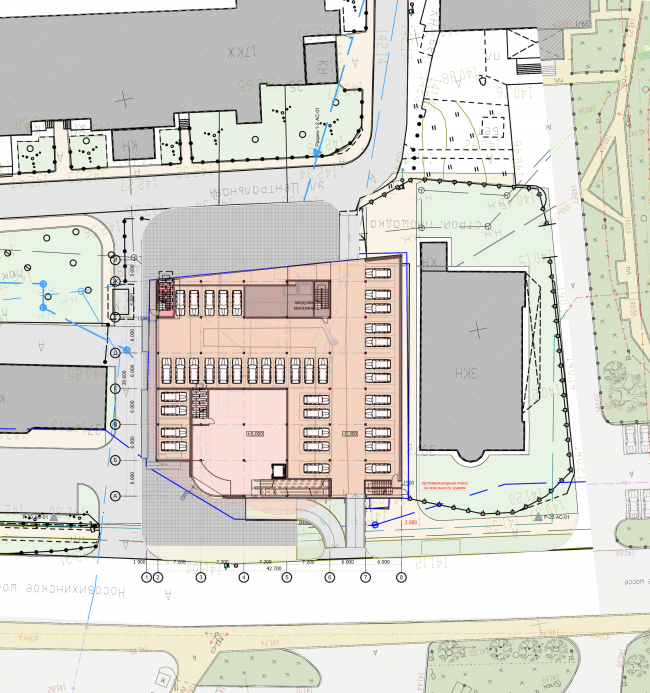 On the plan, the five-story building is almost square, one of its corners rounded. The rounded section is in fact the main entrance to the retail area; it is oriented towards the highway and is viewable from far away. In front of the entrance, there is a paved square of what size this site allows. Its level rises slightly, following the site's terrain profile. The residential houses are separated from the square by a parkway. The parking garage is situated on the underground floor and partly on the first one, next to the entrance lobby. The next three levels are occupied by the retail, entertainment, and public functions. The simplicity of the volume allowed for proposing rational layouts with the shops and boutiques situated along the perimeter and in the center of the building, with the isle running around and between them. The topmost level has ceilings over five meters high and is occupied by offices.

As we can see, the center has been designed in quite a logical, not to say traditional, manner. What was to make it different was its bright colorful appearance. "This place quite obviously lacks a color accent: the panel residential buildings, the shortage of trees, the grimy highway... Trying to fill it with bright colors, we proposed a decoration version of rich cherry-colored façades. The narrow ceramic panels that we planned to use for the coating are slightly different in their shade of color, which give an interesting gradient on the walls of the building".

However, the architects took a lot more liberty when they were working with the volume. Instead of the "box" that one would expect under such a layout, we see a smoothly flowing form with a noticeable broadening at the top and almost a completely transparent first floor. Turned to the highway, the main façade got a giant glass semi-sphere. Looking at it, one might expect that inside the building, there is the other half of the sphere, but no - behind the glass, there are only moving stairs and sightseeing platforms. "The façades in this version are mostly of the blind type - Aleksey Ivanov shares - It has been known for a long time that glazing in its pure form is an enemy of shopping centers. This is why we only use glass in the administration part, in the entrance zone (so that the visitors could find it easier), and in the sections of stairways and escalators where we indulged in realizing an unalloyed, strong, and easily readable image of the planet". The resulting 3D-sign "a fragment of Mercury" marks the entrance.

The second version is more balanced, and has a lot more glazed elements in it. As for the "blind" parts that set a syncopated rhythm, the architects plan to decorate them with composite panels and vertical lamellae that imitate wood grain. There are also versions with white and silvery panels. The floor-by-floor fracturing is enhanced by a beautiful wave that slightly changes its trajectory on each of the levels. The top "office" floor is two meters deeper inside in respect to the main volume of the building. The resulting vacant part of the roof in front of it got an open-air terrace for the office workers. The neat glass railing makes the space of the terrace comfortable and safe. The image of the planet is also there in this version - as a sculptural sphere cut into the volume of the building by the central entrance.

According to Aleksey Ivanov, the client liked all the submitted versions, and he has not yet made a choice in favor of any particular one. However, no matter which of the versions will get the upper hand, the authors hope that now this project that answers the needs of the city and that is also cost-effective, will finally be implemented.
Text by: Alla Pavlikova
Translated by Anton Mizonov