The neighborhood of mid-rise residential houses in the suburbs of Yekaterinburg looks like as an "urbanized" embodiment of the Ural landscape.

The land plot allotted for the construction of a new residential block is located thirty kilometers southeast of Yekaterinburg, between a forest range and the region's first golf course. With a total area of eleven hectares, it borders directly on the course, framing one of its areas from the west and from the north and taking on a shape of a smooth curve on the plan.

"The extremely picturesque field, the "screen" of the forest range, and the mountains in the background left us devoid of any doubts that it is the landscape that plays the main part here - Vladimir Bindeman shares - Besides, we could not wait to use in our project the famous local stone and somehow reflect in it the unique local tradition of cutting, in the rock, roads and even dwellings, and this is why we came up with the image of the future neighborhood almost instantaneously. The houses that would be built here were to become the integral part of the natural terrain, a natural element that would tie the field, the forest, and the mountains into a single whole". At first, the authors were planning to express this metaphor for its face value and proposed to build "terrace" houses with green roofs bending the latter down to the ground: what they got was "hills of houses" that visually did produce the impression of a smooth transition from flat to rocky terrain. However, the first calculations were quick to show that the implementation of such a project wound be beyond the customer's means. This is why the "natural" theme is ultimately there in the project but to a lot more conditional extent - in the form of numerous terraces framed with green copper, and in the form of the thought-out coating of the facades. First things first, though.

The land plot is conditionally divided into three zones, or, rather, considering its configuration, three "belts": the farthest away from the golf field are the entrance group and the infrastructure, the central belt includes the residential properties and the pedestrian yards, while the field itself borders on the landscape and recreation area. This solution makes perfect sense: on the one side, the architects wanted to safeguard the residential premises from the unwanted vehicles and people, and on the other side - they just could not build along the brink of the golf course: golf is not the safest game for a casual passer-by to be around, so some buffer zone is mandatory. Treating the latter as a compound promenade, the authors tried to make it (along with the golf course, of course) as viewable from the residential houses as possible. Totally, the complex consists of seven residential buildings, five of which are in fact multi-sectional houses, arranged "in brackets" and opened up in the direction of the golf course. The central section has a break in it, though: the two long terraced wings run almost parallel to one another, while one corner part is a little smaller than the others - the differences dictated by the peculiarities of the of the land plot with its boomerang-like outline let the architects give a fair portion of individuality to each of the sections and their yard territories. Each house is raised upon a stylobate with a green roof, while the yards got a rather active relief - in fact, this is a whole system of green terraces and trails, totally vehicle-free. "In the stylobate, we placed the parking garages which, on the one hand, would allow us to make the yards completely pedestrian, and, on the other hand, would help solve the problem of having to delve too deep into the rock - Vladimir Bindeman explains - the "green wedges" are also there in between the houses: thanks to them, the people will get extra walking routes, while the houses will avoid looking together like a bastion that separated the golf course from the forest range". But then again, the architects gave some "natural" features to each of the buildings. 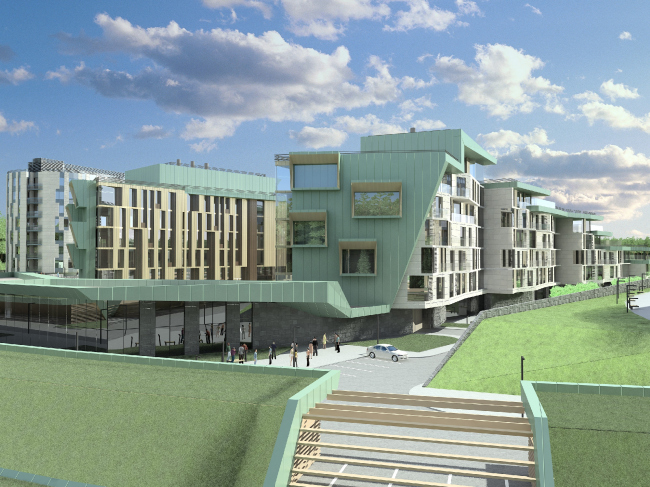 All the sectional buildings are of varying height, from two to six floors, descend in the direction of the golf course in broad "stair steps". Coated with natural stone and the already mentioned copper panels, they look like the fissure of bare rock. Only one third of the terraces is planned to become residential properties - it is planned that this latter will be sheathed with wood, and the remaining part will be decorated with backfill. In finishing the facades, "Architecturium" also proposes to use the locally manufactured natural stone, serpentine marble, and sandstone. The backyard facades, though, are reigned by glazing; glass verticals of the stairwells and hallways also help to visually "split" the volumes, thus naming the yard lighter and more permeable. In the triangular segments, formed by the wings of the three central houses, the architects placed two elliptic eight-story towers. Against the complex geometry of the other volumes, they look quite a surprise: the authors of the project explain thus choice by their desire to provide optimum insolation and provide the apartments with better views. Meanwhile, the oval houses not only offer to their future inhabitants an interesting alternative in terms of apartments but also serve as kind of landmarks of the quarter's center, softening - and thus bringing it more up to date - its "rocky" image. But then again, one can also see something "man-made" in these towers, particularly in their profile - at the expense of the increase of their thickness from the lower floors to the upper ones and the liberal glazing around the rounded "nose" the look like giant ice blocks - who knows, maybe these are ice mountains that survived from the ice age into the present and that are now being adjusted to become human homes.

As Vladimir Bindeman shares, this complex was initially designed as some sort of a health resort. And, since the part of the sea is played here by the golf-course surrounded by rather stern nature, it got the matching appearance. The charming and even "brutalist" buildings, yards likened to moss-covered hills and the highly developed underground part protected from bad weather (it is down there that the public infrastructure is located) create the perfect conditions for the comfortable life in the Urals.
Text by: Vladimir Bindeman, Anna Martovitskaya
Translated by Anton Mizonov 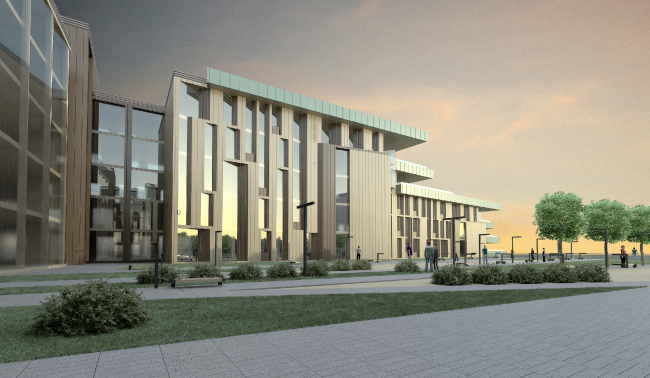 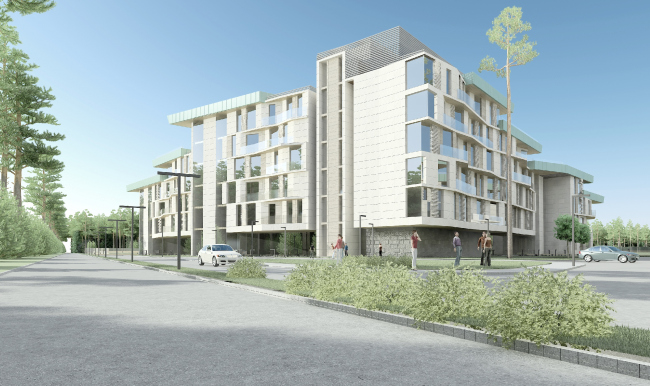 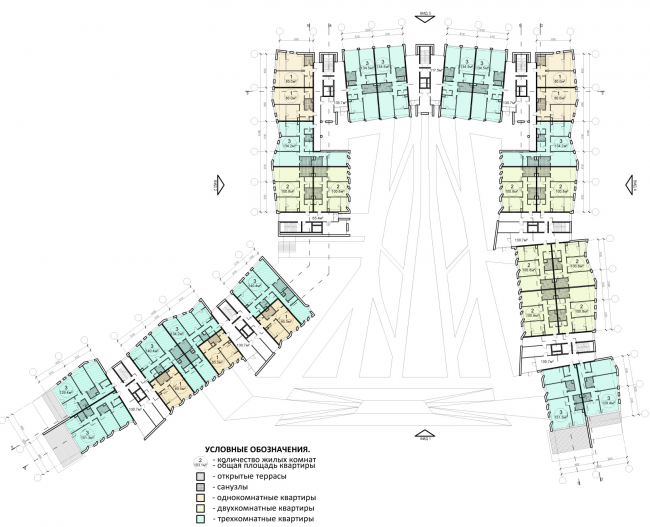