The conceptual design of a music school: proximity to an Alvar Aalto building, expressive organics, and an attempt to draw public attention to a “low-profile” competition.

In January of this year, the city administration of Vyborg conducted a competition for the conceptual design of a music school with a concert hall for 500 people, located at Keppa Street 4, directly across from the famous library built by an Alvar Aalto project. The competition was an open one, yet it got very little press coverage, ultimately racking up only five competitors. By sheer coincidence – a friend sent them a link to the competition – their list included A-Len. According to Sergey Oreshkin, “the competition passed in such a closed-door atmosphere that one had a hard time figuring out why it was organized in the first place.” The victory was won by the project, whose authors “were able to express their idea in the most cost-efficient way”.

To evoke more interest to the location that deserves public hearings and an international competition, A-Len decided to show its proposal.

In addition to the obvious reasons why A-Len decided to take part in the competition – the center of the city boasting a status of a historical heritage site, proximity to the work of the legendary architect, and a rare typology – there was still another one: the leader of the company, Sergey Oreshkin, was born here in Vyborg, and here he graduated from the local art school, where he was “supercharged as a young pre-architect”. He describes Vyborg as a place with unique town planning, “just like from textbook”, which manifests itself particularly vividly next to the location in question. Location plan. The music school with a concert hall in Vyborg

The Lenina Avenue, one of the main arteries of the city, links the Rynochnaya and the Paradnaya Squares; one side of the avenue is presented by dense “Saint Petersburg” construction, while the other side consists of several parks, including the “esplanade” park where the library is located. Across from the library, at the corner of the Suvorovsky Avenue and the Kepp Street, in the residential block with a few Stalin buildings, the school will be built. It will be added to the “recreational” strip along the Lenina Avenue, and it will further strengthen the front of the Suvorova Avenue, filling the lacuna. 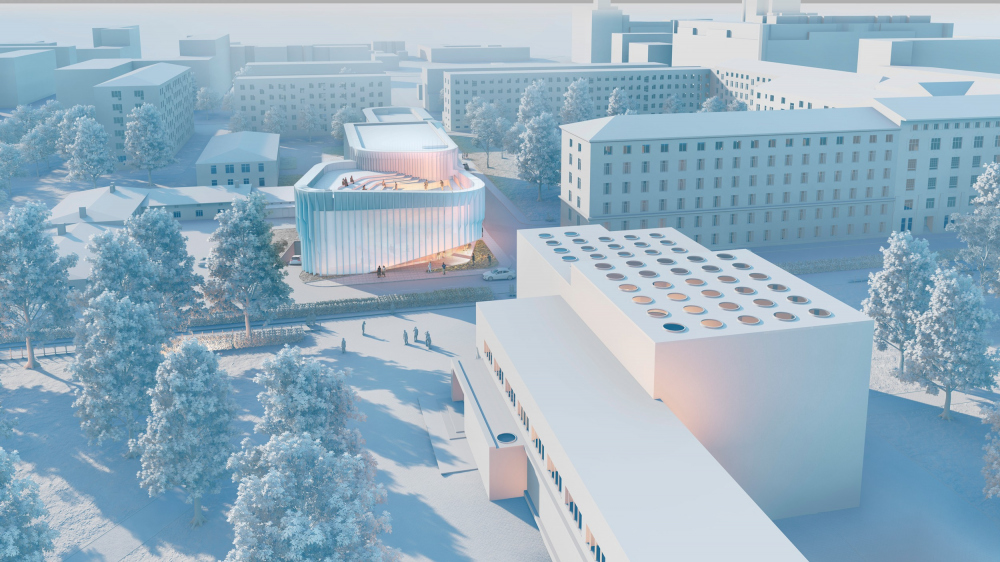 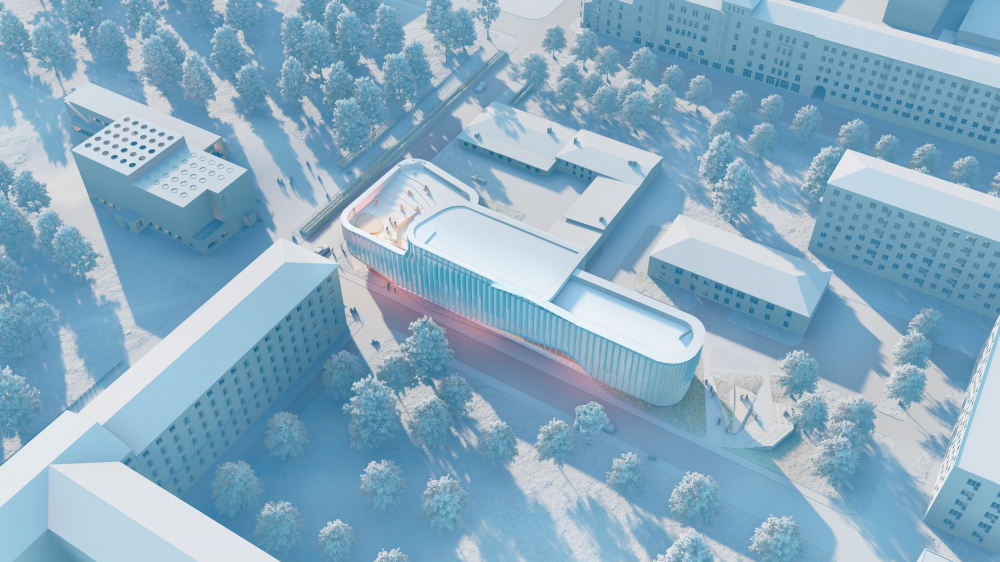 The members of the competition were to decide how to construct, on a comparatively small land site, a building that is filled with functions, and do that without compromising the processes that will go on inside of it. In the A-Len concept, the school consists of a few blocks of different height. The academic block accounts for almost half of the total volume, has an individual entrance, and is placed in the part that is the farthest from the Suvorovsky Avenue: this way, the classroom windows will overlook quiet green little yards. In the center, there is a concert hall, and the closest to the Aalto library is a lobby with a sophisticated system of tiers and staircases. The arrangement of spaces is governed by the functional logic: the streams of children and the adults coming to the concerts are separated; the loading of the stage props takes place behind the scenes. The lobby space is adjusted to host micro events – in some of its corners, it will be possible to organize exhibitions, readings, or film runs. There are also two amphitheaters for open air sessions: one on the roof, and one on the little place that like an echo continues the building in the depth of the city block. The architects deliberately opposed the expressive “shell” of the new building to the ascetic Aalto library. Sergey Oreshkin shares that the image was suggested by the building’s function: the lamellae of different width are meant to symbolize the piano keyboard. The stylistic device turned out to be as simple as capacious. 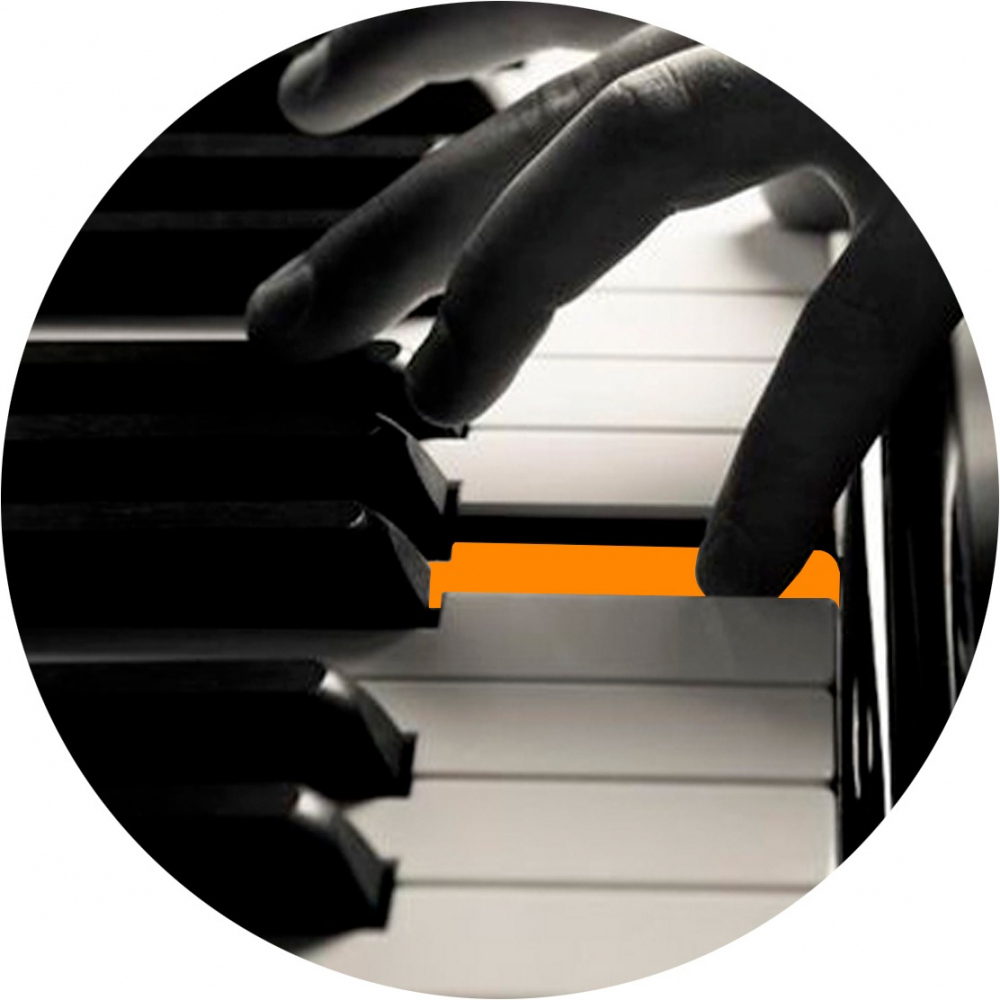 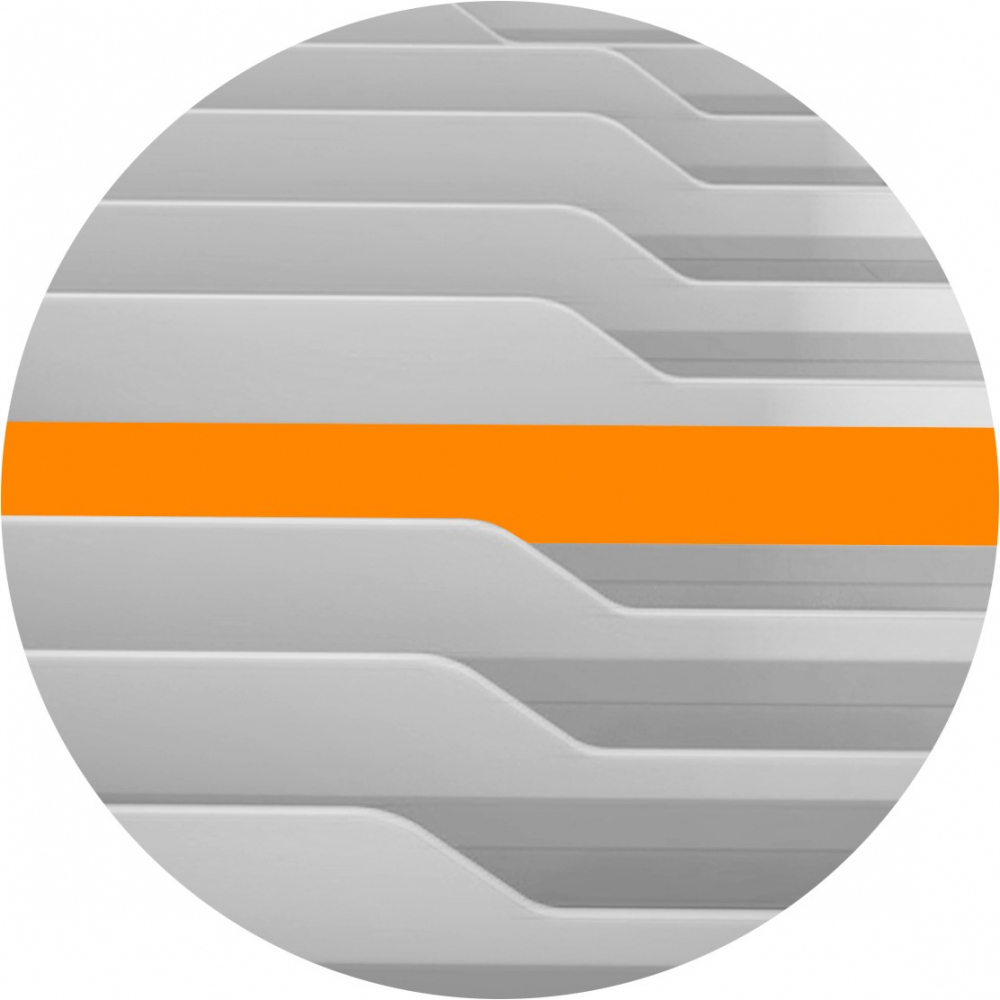 The 3D renders, in which the library and the school, separated by the road, are “looking” at each other, make one thinking that, should the new building be executed in the appropriate manner, the dialogue between the Aalto masterpiece and the music school would indeed be possible. In the A-Len project concept, the school makes a “female” pair to the minimalist building of the library, accentuating the beauty of the work by the Finnish architect by showing it in a new and different light. 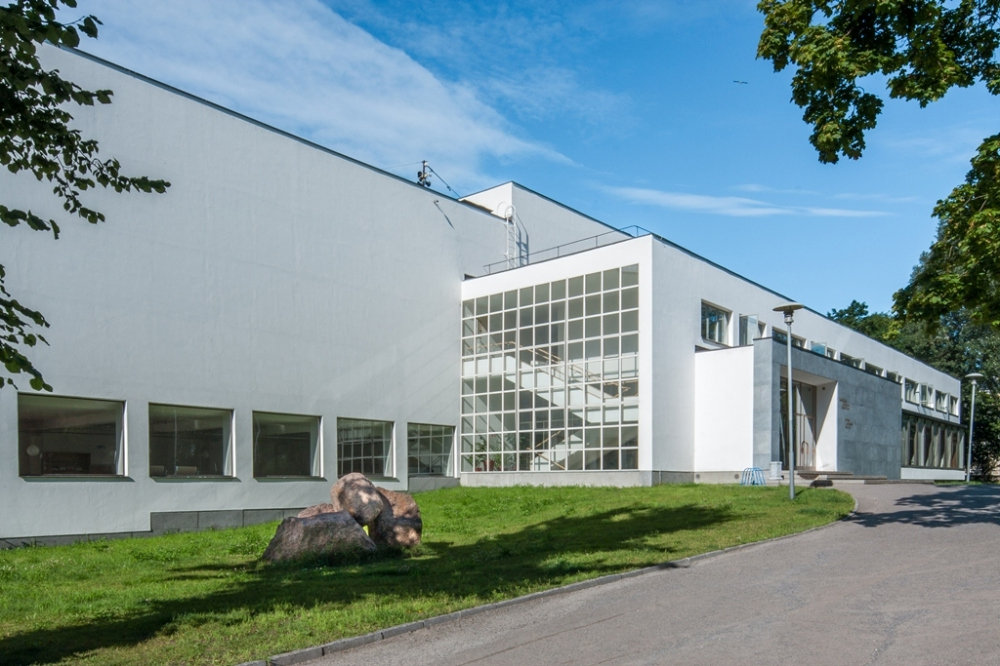 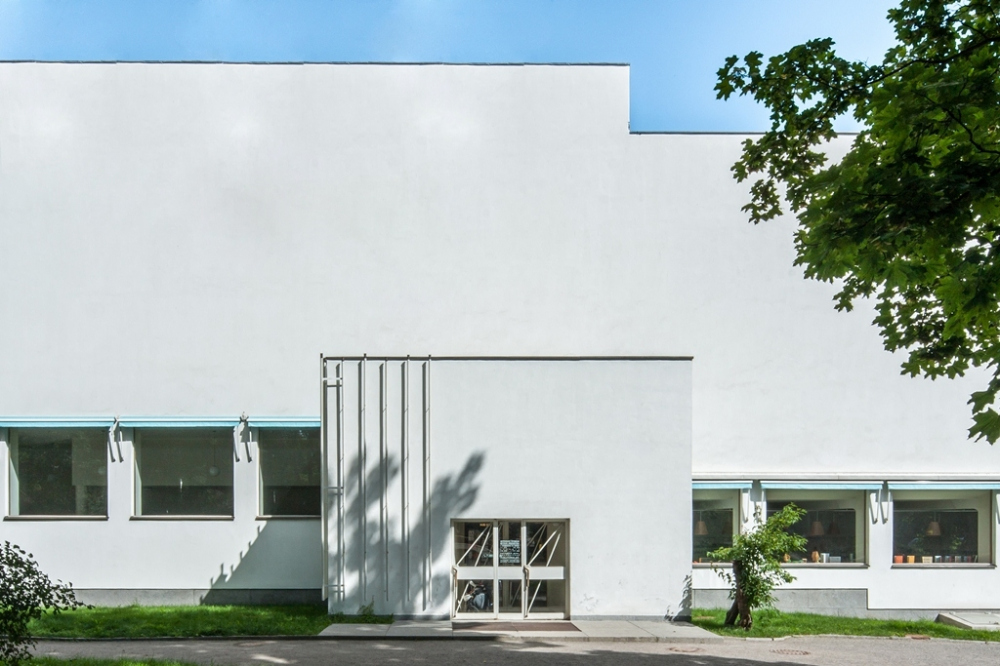 The “femininity” of the school building is also felt at the material level: the lamellas look like the folds of a dress, or ruffle, or a veil – and on the subtler subliminal level: the curves and the backlighting make one feel the warmth and the vibrations of life. “Femininity” is probably one of the most vivid signs of organic architecture, and on this specific project the “organic architecture” that this architectural company loves to make but cannot fully explore, for example, in the housing projects that it designs, finally sounds in full effect.

The two buildings are not only opposed to each other but also have a connection between them. In his works, Alvar Aalto oftentimes course combined organic architecture and functionalism; in addition, the architect’s surname translates as nothing less than “wave”, the most famous part of the Vyborg library is the wave-shaped ceiling. From this standpoint, the school can be viewed as the “insides” of the library presented to the observer. And if we are to continue the discourse about the paired relationship between the two buildings, then the wave-shaped facade of the school and the “corrugated pattern” superimposed upon it look like a seashell, while the library is the pearl, perfect in its purity. Another important strong point of this project is that it is easily implementable. According to Sergey Oreshkin, the lamellae are essentially an inexpensive and aesthetically appealing material. The architects are proposing to make them from milky glass and install backlighting that will create an “aurora borealis” effect like the iridescent pearls that will change depending on the weather, ambient light, or concert program. Light is also a wave. The 500-seat concert hall obliged to think about its technical contexts as well. According to Sergey Oreshkin, if you want such hall to host a variety of events, you need a full-fledged stage box: with housing machinery and turntables, orchestra stalls, dressing rooms, etc. The company has a formidable experience in designing concert halls, to name but the project of the Alla Pugacheva Song Theater, for which A-Len collaborated with the acoustic experts of the Mariinsky Theater. Also, the architect believes that the building also needs an underground parking garage – if there is a full house, there can be too many cars for such a quiet city area – as well as a cafe to cater for the visitors of the library.

Sergey Oreshkin calls on to organize an open international competition, the first stage of which would be public hearings.
Text by: , Sergey Oreshkin
Translated by Anton Mizonov