The housing complex situated on the border of the Polyustrovsky Park is all about its advantageous proximity to the forest land within the city boundaries. This proximity is also addressed on the imagery level: the houses look like an abstract pixel carpet that puts one in the mind of a spring forest. The comfort-class housing complex “Dom na Lvovskoi” is built by Megalit in the Krasnogvardeisky District of Saint Petersburg, on the western border of the Polyustrovsky Park. Although this park is rather large, 45 hectares, it is not really old – it was made in 1967 with a name of “50th Anniversary of the Great October Socialist Revolution”, in the stead of the former Petrovsky mineral water (rich in iron) health resort. The park is dominated by lime and birch trees but, although large, it does not look like a forest at all: the trees are planted in neat rows among the grass and park trails. Still, though, a park is a park, and coming out of their homes, the local residents will at once be able to find themselves al fresco; not every housing complex can boast such possibilities. The Lvovskaya Street, which gave the name to the complex, runs on the opposite side, west of the land site. This area is dominated by block housing construction, mostly nine-story houses, which, on the one hand, levels out the height restrictions, because most of the nearby buildings are in fact high-rises, and, on the other hand, is lending itself to being diluted by some color inclusions that could liven up the otherwise gray surroundings.

Four houses, each 16 stories high, are positioned on a trapeze-shaped land site with regard to the insolation requirements. According to the architects, the arrangement and the form of the volumes are calculated in such a way as to make sure that “in any time of the year and in any time of the day, the sunshine would penetrate all of the windows”, and the flats would get enough sunlight even in winter. Which, by Saint Petersburg standards, where every sunbeam is worth its weight in gold, is quite an important achievement. 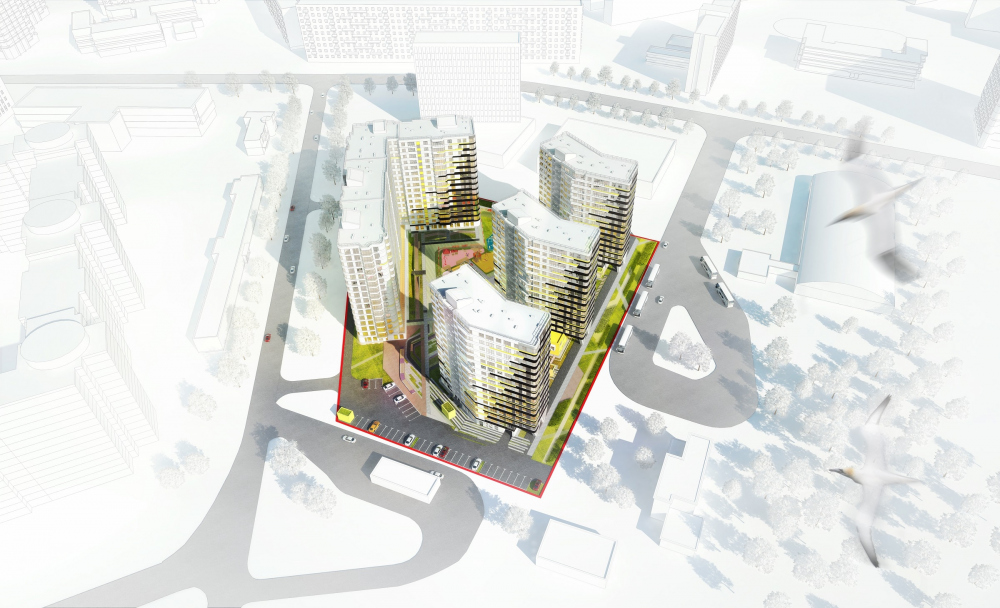 One long L-shaped building forms a “city block” corner on the north border of the territory: its south side walls will be getting plenty of sunlight, and at the same time this will help to protect the inner courtyard from the northern wind. The other three buildings are essentially slightly asymmetric “books” that stand alongside the eastern border of the park is such a way as to obscure as little as possible sunlight to the triangular yard that the architects interpret as “your own garden beneath your window”. As for the yard, it has been engineered in accordance with modern standards: it is vehicle-free, its bicycle trail is equipped with roundabouts and bicycle parking; there are several different playgrounds and permeable pavement, the kind through which grass grows. But then again, as we remember, the houses stand on the border of the park, into which the yard smoothly bleeds: the architects are not planning to build any kind of fence around the houses – it’s not something that’s common nowadays – and the three south side buildings are turned very much like open Venetian blinds not only to let in as much sunlight as possible but also in order to make the complex merge with the park altogether, which will give the residents an opportunity to go for walks in the park right from their doorstep. 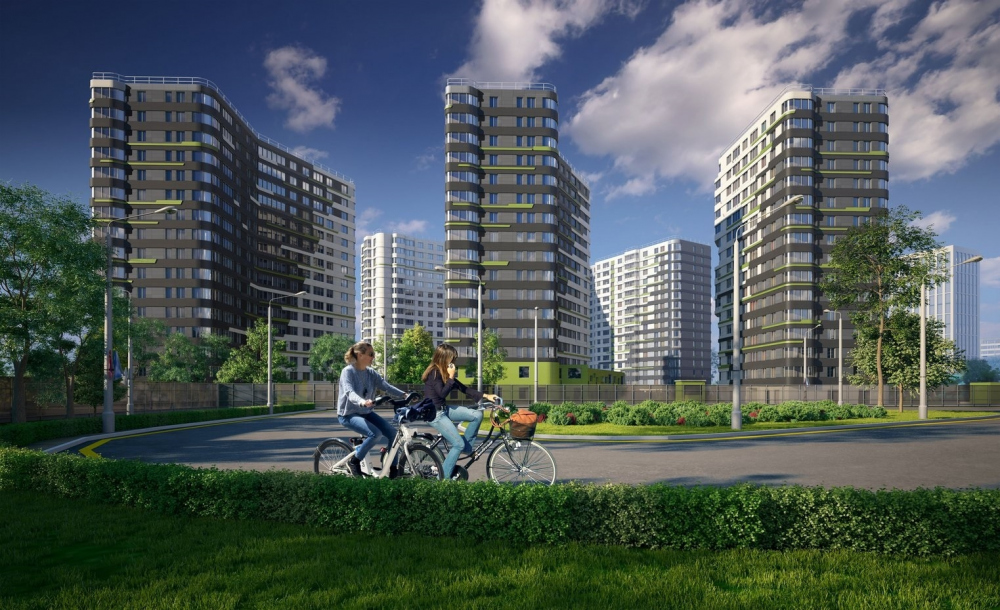 All of the entrances to the residential buildings (for the sole exception of one in the middle tower) can be accessed both from the street and from the yard. The entrances are also barrier-free – they are raised above the pavement some mere 30 centimeters, and those are leveled out by a ramp. The entrances to the premises of the public ground floors that will host cafés, shops, and a children’s center, are only designed on the street side, and they never cross with the residential entrances.

There is a single-tier underground parking garage for 422 car stalls – underneath each of the buildings, and not underneath the whole construction blueprint, as was the usual practice some ten years ago. There are 800 apartments; about half of that number is allotted with parking places, even though there are a few extra ones, for guests and people of limited mobility in the southern and northern parts of the land site. The upside to it – the architects and developer specifically stress it – all of the parking garages are equipped with elevators. This is something that Is rather often overlooked but it is still an important detail nonetheless: surprising though it may be, there are lots of houses out there that do have an underground parking garage but do not have an elevator – imagine that you have to make a daily ascent of the stairs with two heavy bags of groceries.

Generally, the authors, unanimous with the client, are marketing their concept as “new level of comfort”, which, according to the architects, is defined by thought-out details – in other words, the authors delved into all of the details in order to make the life of the residents of the complex as comfortable as possible. In addition to the already mentioned – thought-out insolation, vehicle-free yard, and shops on the first floors – the floor plans of the apartments are also well thought out. By modern standards, the selection of apartments here is rather unusual: in addition to studios and single-room apartments, the lineup is stretched to include five-room ones. There still are big families out there even nowadays, aren’t there? Even some of the parking places are sold as “family” ones, in twos, but still without any extra discount nonetheless, just so that, say, father and mother have the convenience of parking their cars next to each other. Besides flats, the complex also has apartments in it, which allows the architects to relive some load on the city infrastructure. Storage facilities are also provided – they are sold, just like parking places, individually. All of the apartments come with glazed stanzas, whose design is marketed as “optimized” – they really have “everything you need, nothing you don’t”, judging by the line ranging from studios to double-room apartments, which can be seen on the realtor website риелторском сайте of the project.

The outside form of the buildings of the complex is all about its main competitive advantage – the proximity to the park – and it turns the houses into a semblance of some avant-garde carpet or Rayonnist Style picture that conveys, through the contrast of color and shape, clear natural associations. The architects chose the salad green, the color of fresh May leaves. However, it is given in stroked accents, like the first budding leaves, against the backdrop of two basic colors, black and white, black occupying the smaller part, as if the houses were telling us the story of a short Saint Petersburg summer, and a long white winter. The black parts of the buildings are attracted to the park, as if they want to be closer to the soil, the white parts gazing in the direction of the city. At the same time, the black side ends are looking southward, as if they were charred by the sun.

The technique of chunky pixel and stroke pattern and the use of salad green is not exactly groundbreaking – but in the bold contrastive graphic they go a long way to make the buildings come alive and even partially conceal their relatively simple shape that is generally characteristic of housing projects, introducing – even if optically – a theme of a sharp diagonal “nose”. At the same time, this technique mitigates the sharpness of the diagonal borderline where black meets white, as well as to some extent the thickness of the stripes of the intermediate floors by fracturing it with resonant thin lines that look like specks of sunlight dissolving the surrounding houses. 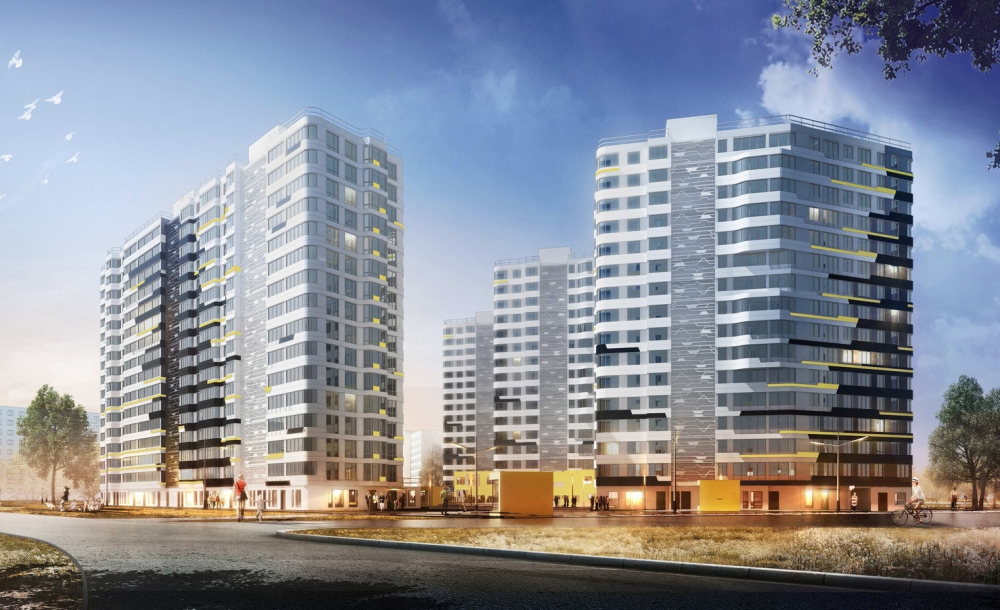 All the corners are rounded, which gives an extra sculptural look to the volumes, as well as some high-class and up-to-date quality, the asymmetrical rounded corners of the stanzas accentuating the “wavy” look of the buildings, as if the bands of the windows surround a small coppice (most likely consisting of birch trees), which is indicated by the mutually penetrating strokes of black and white, as well as by the open work lattices of the staircase/elevator blocks (in which, by the way, a keen observer can see the signature “A” from the new A.Len logo.

In spring, the houses will be quite harmonious with their park location, and in winter they will remind their residents and everyone who comes around that warmer and better days are still ahead, and the nature will bloom again. But then again, on the inside we see the same green color – as Philippe Starck once said, coming out of his home, a man must feel like he can do anything – possibly, the energetic color works towards this same goal – it unleashes the motivation within.