​Between the Past and the Future

Neatly inscribed into the respectable housing environment of the Petrogradskaya Side, the residential complex “Futurist” teeters on the brink of postconstructivism and Art Deco. Its main task, however, was to breathe new life into the building of the Levashovsky bread factory and make it flourish once again. The project of the elite housing complex Futurist consists in redeveloping the Levashovsky bread factory situated in a triangle formed by the Barochnaya and Bolshaya Zelenina streets and the Levashovsky Avenue, not far away from the spot where the Karpovka River flows into the Neva. The factory was built in 1933 based on the project of engineer George Marsakov. He developed a “vertical ring” bread-baking technology, which ultimately determined the shape of the building: the production facility consisting of cylinders fitting into one another, and the boiler house covered with a dome. The factory is famous for the fact that during the Nazi seize of Leningrad it never for a second stopped baking bread. View of the building from the west side of the land site, the end of construction, 1933 © The Central State Archive of Photographic and Filming Documents of Saint Petersburg

In 2012, the building got a status of an architectural monument of regional importance, and the production facilities moved over to a new place. The factory stood empty until 2016, when it (together with the neighboring 2.5-hectare land site) was bought out by the RBI, a developer company that decided to invest both in the construction of a new housing complex and in reconstruction of this heritage site. 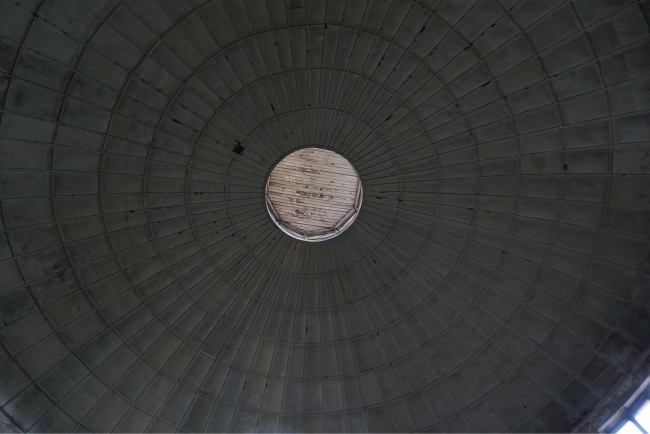 The project, developed by the architectural firm “Evgeny Gerasimov and Partners”, solves three tasks: building a commercially successful housing complex, bringing the city block’s housing stock to order, and introducing into the city’s day-to-day life a monument of architecture that for a long time has been hiding behind fences and later additions.

Probably, it will make sense to start off with the latter. The volumetric and planning solutions, the historical façades, the staircases, and the factory chimney will be kept fully intact, while about 15 of the surrounding buildings of the soviet period, which are not included in the boundaries of the heritage site and simply make visual “noise” – will be torn down altogether (CLICKABLE). The company “Development Systems” has already presented (CLICKABLE) a 3D BIM model of the Levashovsky bread factory created on the basis of laser scanning of the complex. 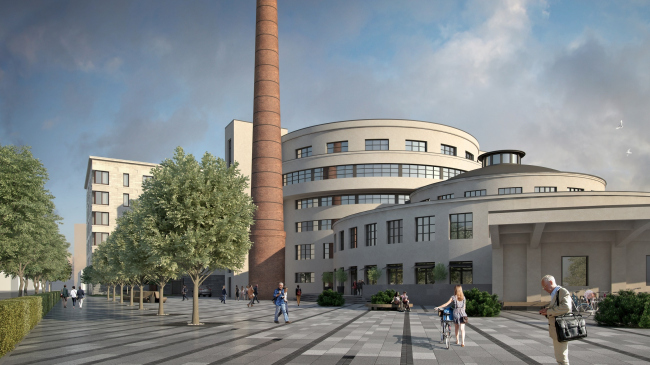 The residential complex Futurist. The square © Evgeny Gerasimov and Partners 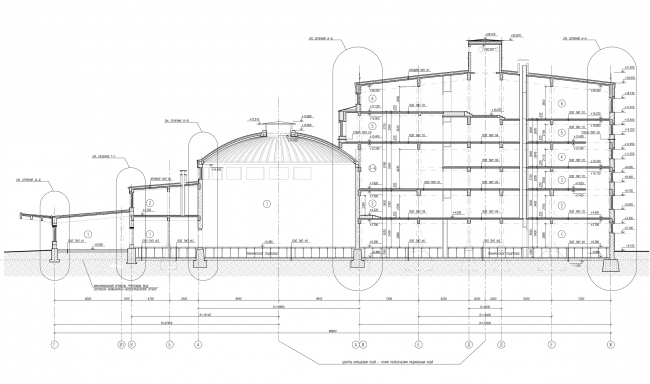 The concept of operating the complex was prepared by the Agency of urban transformations Genius Loci. The building will be turned into a cultural center containing expo and congress venues, a bakery, various art objects, a book store, offices, and an exposition devoted to the Nazi siege of Leningrad.

In front of the main entrance from the Levashovsky Avenue, there will appear a “grand entrance” square, while from the side of the Bolshaya Zelenina Street, there will be an art park. As for the building itself, it will be clearly viewable from the adjacent streets. 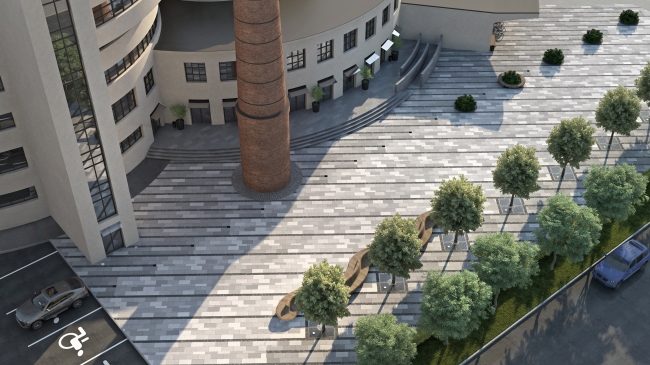 The residential complex Futurist. The square © Evgeny Gerasimov and Partners

The new residential buildings that frame the bread factory are arranged in a manner that is anything but trivial. Two of them, which stand along the Barochnaya Street and the Levashovsky Avenue, stop the lacunae in the existing construction of the early XX century. In accordance with the plane geometry of the Barochnaya Street, the architects positioned the in-block nine-story building – the tallest and the longest one. Its staircase-like part is echoed by three buildings that are lined up diagonally in an order of decreasing their height down to three floors in the direction of the Bolshaya Zelenina Street, where getting close to the red line is impossible because of the trees growing there. The seventh and the last building stands on the corner. Evgeny Gerasimov explains that such planning structure was to some extent borrowed from the Traktornaya Street, where the houses are joined by semi-arches, and to some extent from the Leitenanta Shmidta Embankment, whose curve is accentuated by the corners; also, to some extent, the configuration was conditioned by the insolation regulations. One way or another, the lines of the master plan turned out to be pretty avant-garde. The residential complex Futurist. The projects of landscaping design © Evgeny Gerasimov and Partners The Bolshaya Zelenina Street looks here as if it were turned inside out. The city block consisting of odd buildings of different height resembles the classic “water well” yards of Saint-Petersburg with their inevitable annexes and labyrinths of arches and underpasses. As for the “grand” or “representative” part of the complex, it is situated precisely behind them. Only this is not a classical façade but a constructivist factory building – the closer we get to it, the more reverently the new buildings lower their height in token of respect for the architectural monument.

Thus, the view of the Levashovsky bread factory opens up from the adjacent streets; the accent is strengthened by the grand square and the art park. Together, they create a large public territory that is augmented by an array of residents-only private yards. The architects and the client paid a lot of attention to the landscaping part, setting for themselves a task of making a “model” landscaping project. The residential complex Futurist. The park © Evgeny Gerasimov and Partners

The staircase-like configuration of the new city block allowed the architects to create a system of little yards and squares where people would have various scenarios of spending their time outdoors. The most active life goes on around the elongated building, whose first floor is going to host a conference hall, a spa zone, and a small gym. There is also a recreational area joining it on one side, with playgrounds and sports fields, and a promenade on the other side, where one could go for a walk with a stroller or ride a bike. The firewall of the historical building, which goes out to this particular yard, is decorated with vertical greenery. Other yards display mosaic panel pictures, gazebos or benches underneath the trees; there are also ping pong tables and easels for drawing placed underneath one of the arches. The complex is fenced off from the city public areas by a hedgerow. The residential complex Futurist. The yard © Evgeny Gerasimov and Partners

One can only get into the inside yard through two lobbies that serve the entire complex, which are located in the buildings standing on the Barochnaya and Bolshaya Zelenina streets. The other residential buildings can be entered from the yard.

The landscaping concept picks up the suprematist composition of the master plan, playing with the same rectangles and circles, only on a smaller scale. The rhythm is set by the geometric paving patterns, on the background of which other figures are placed in accordance with a certain logic: wooden boardwalks, neatly trimmed shrubs, and groups of trees. There will be a lot of new trees added to the ones that are already there: pine and fir trees, oaks, maples, willows, and mountain ash.

As for the façades of the buildings, they are deliberately designed in a simple manner, oriented not so much on the avant-garde architecture (although some of its notes are heard in the jagged balconies of the stairway-like part of the elongated building), as in the early post-constructivism, pretty similar to the Lensovet House on the Karpovka – because they are essentially trying to perform the function of the frame of the 1930’s heritage site. On the other hand, the façades of the new houses are decorated with stone, which was almost never the case in the Soviet Russia of the 1930’s, but which in this specific instance is meant to combine the historical prototype of the “proletarian Art Deco” with the modern requirements for bourgeois respectability. Therefore, the basement floor is decorated with dark rock-face granite of various textures, with broad horizontal stripes containing broad grooves. The higher part is decorated with natural Jurassic stone, fine faceting, slabs of the windowsills, the “shutters” of the flutes on the sides of the window apertures, and volumetric stones insets, placed in a staggered order. The latter resemble, on the one hand, the building designed by Evgeny Gerasimov in the Kovensky Lane (CLICKABLE), and, on the other hand, numerous examples of the 1930’s, for example, the Rudnev façades of the Frunze Academy. The residential complex Futurist. A fragment of the facade © Evgeny Gerasimov and Partners The small quadrants of the relief pictures can be traced back both to the Soviet prototypes in the spirit of All-Union Agricultural Exhibition, and to more pristine forms of foreign Art Deco. The golden spicules of the ventilation grills seem to be closer to the image of the Soviet Union, thematically, in any case – but generally, for the sole exception of their expensive materials, the façades almost answer the standards of the early-Stalin architectural style. Dramatic outlines are only sported by two buildings with public lobbies: the entrance on the Bolshaya Zelenina Street is marked by an asymmetrically placed portico with fluteless semi-columns in the spirit of Ivan Fomin’s “red dorika”; the building on the Barochnaya Street sports a row of triangular bay windows. The interior design of the entrance zones shows even more clearly the influence of the western Art Deco, austere and at the same time pompous in its own way. Here the architects used artificial marble, black glass, wooden sashes, and carpet reliefs with geometric ornaments. The residential complex Futurist. The main lobby of the 4th building © Evgeny Gerasimov and Partners The residential complex Futurist. The main lobby of the 4th building © Evgeny Gerasimov and Partners

All the seven buildings rest upon a single underground parking garage. The first floors will host cafés, shops, and other rentable premises. The complex is designed for 199 apartments with a useful floor space ranging from 50 to 190 square meters; most of the windows command views of the Krestovsky Island and the Malaya Neva, the Petrograd Side, and the building of the Levashovsky bread factory.

The project of Futurist was awarded a silver achievement badge at the international architectural festival “Zodchestvo – 2018”. The complex is due to be built and put into operation by 2022.