​APEX: “GES-2 is not a museum but a progressive center that is meant to bring us back to the ideas of romantic futurism”

The architects of the Moscow-based company speak about the progress of the GES-2 reconstruction project by Renzo Piano. 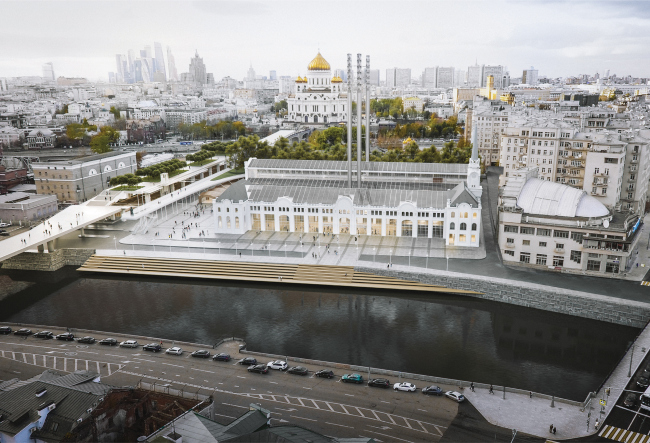 View of the complex from the Bolotnaya Embankment. Photo courtesy by Renzo Piano Building Workshop (RPBW)

Archi.ru:
– At what stage is the work on the GES-2 project?

Ekaterina Valkova,
the head of the workgroup:
– The construction is underway: work is going on aimed at strengthening the existing structures; the underground part underneath the main building is being built, as well as the parking lot and the mechanical rooms.

– And what else is going to be there?

– The museum will have a vault for storing the exhibits, a lecture hall, classrooms, a restaurant, and workshops for artists. As opposed to the original concept, currently a few options are being considered – specifically, an option to make the exposition penetrate into the underground parking garage in such a way that one of its floors would become a part of the public program of the complex. This will be a multifunctional space but some of the specific details are still being discussed. All the premises, including the mechanical rooms, meet the rigorous standards of a high-quality space. This is the attitude of V-A-C foundation and Renzo Piano Building Workshop. 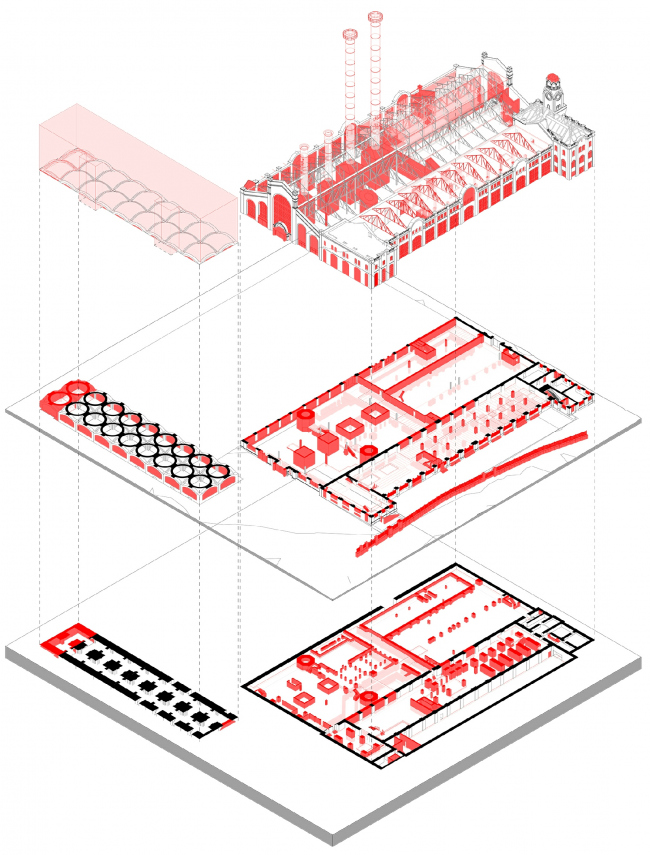 – How is your collaboration with RPBW organized?

– We are working in close cooperation with Renzo Piano in one and the same BIM model. All of the working documents that go to the construction site are developed together, the architects of RPBW inspecting every unit and regularly coming to the construction site; one of the representatives of the firm is permanently in Moscow – he performs the author supervision together with us. Each and every detail is given meticulous attention; we control everything down to the last screw.

It’s very important to realize that our collaboration is not just about a regular exchange of drafts or a series of workshops – it is an ongoing process that is taking place in a real-time mode in a BIM model format. Technically, this is not a piece of cake but it ultimately allows us to be in the loop of what’s going on in the course of the entire implementation of the project. This is a unique precedent for our country – such a close cooperation with foreign partners, down to the fact of synched work in a BIM model. – We have already touched upon the changes that were made to the original proposal on the underground level. What else changed in the project that was shown to the public in 2015?

– The original concept did not undergo any major revisions, we only added new functions – an opportunity to organize concerts, use the venues for various performances, and many other new scenarios for using the museum space. We added art studios where young artists can work with different materials, such as metal, wood, ceramics, and fabrics. And the people who will be taking a stroll around GES-2 will be able to watch them work. For the same reason, we also added a bakery – as a means to involve the passers-by into the interactive process.

– The project originally provided for developing the surrounding area that constituted a significant part of the island. What specifically are you planning to do?

– In front of the main building, there will be a square, a piazza, which will be linked to the waterfront: it smoothly flows into GES-2 through high windows. The main façade will have high doors on it, which will open in the summertime, and some of the functions will “spill over” outside the building, creating the transparency effect, characteristic of the Renzo Piano projects. We will also have here what can be described as “indoor square”, a lobby, and a gallery that will “drag in” whatever will be going on outside. On the other side of the façade we have a garden and a birch tree coppice. Through the stained glass doors on the north façade one will be able to exit into the garden, which goes on to support the idea of a transparent space. – From the north, as I understand, the façade is only partially preserved?

– From the surviving historical photos, we see that the original interior was to be transparent, with plenty of air in it. This is a very beautiful space. Currently, the building is cleared of all the layers of later additions, inner partitions and outside annexes. The project is meant to bring out the best of this building. The stained glass windows will be replaced by the overall spirit of the industrial façade will still be there. The whole project is extremely respectful of the historical heritage that this building presents.

– A number of environmental components are also planned…

– Yes, in the upper part of the new chimneys, there will be installed wind turbines, and there is an interesting metaphor having to do with these chimneys. Because what do industrial chimneys do? They pollute the air! And we are turning this frown upside down: our chimneys will take in the air for general ventilation of the building. Meaning – we are going to collect clean air at a height of 70 meters and route it into the building. And, instead of polluting the air, we are thinking about how to clear it.

There will also be photovoltaic elements installed on the roof of the building, while the rainwater will be used to water the garden.

– And just what percentage of the needs of GES-2 will be covered by the “green” power sources?

– Generally speaking, these sources help to save quite a lot of resources. Our system of watering the birch tree coppice works not at the expense of the city’s running water but on the “gray” water reservoir – in our instance, this is purified rainwater. The photovoltaic cells and the wind turbines put out about 6% of the total amount of power consumed by the building.

– It’s still a lot by Russian standards, considering how rarely such “green” technologies are used.

– We need to be moving in that direction and create the precedent of using the “green” power and then popularize it. It’s common knowledge that our country is rich in resources – electricity will always be less expensive here than somewhere in Scandinavia, for example – and that the costs of installing the photovoltaic cells was far greater than the cost of the regular power consumption would be. But this project is “about the future”, about how we should be developing – it is not even a museum but rather some visionary center. A good deal of work is done on attracting specialists who could predict our development, not just chase what’s currently going on.

For example, this week we had a meeting with the professor of the Massachusetts Institute of Technology, who was invited by V-A-C foundation as a consultant for GES-2 in the field of multimedia equipment.

– With a view to give the artists new means of expression?

– Yes, new means of expression, as well as new technical and technological possibilities to share what they’ve got with the world. Who could have thought but a decade ago (when the Internet and social media websites were already a part of our life) just how popular would Instagram be and how it would influence the lives of people? GES-2 is posing before the project team the task of imagining what's going to come next, what’s going to be the next big thing. Among other things, this project is about romantic futurism. The idea is applicable to all the aspects of culture, and there is more to it than just looking at pictures or listening to music. Handicraft is also a part of culture. For this reason, we will have a цех металлообработки here, where the boys will learn hammer-work, casting, and so on. The art of deejaying, graffiti, and video is also culture. And GES-2 will be the perfect example of such interdisciplinary alloy.
Text by: Renzo Piano, Xenia Ossipova
Translated by Anton Mizonov