There is an argument going on in Saint Petersburg: will it be OK to add a new wing (of modern architecture) to the Dostoyevsky Literary Memorial Museum or is it only allowed to recreate the lost tenement house nearby? In this article, we are covering the preliminary concept of the museum building. Concept of developing the Dostoyevsky Literary Memorial Museum. View of the museum from the Marata Street © Evgeny Gerasimov & Partners

Known around the world, an indispensable part of the Russian school program, and widely read in the western countries, the writer Dostoevsky spent most of his life in the tenement buildings of Saint Petersburg, which was a custom those days. The historians of his creative work name tens of addresses. However, there is only one memorial museum in the city – the house in which the writer lived the last years of his life and passed away – Kuznechny Alley 5, in the Kuchina tenement house. The entrance to the museum is situated on the corner from the Dostoevskogo Street, downstairs, through the basement floor. The flat itself is on the second floor, with a cast iron balcony, the museum’s theater occupying the basement and the first floor. The museum is extremely active: performances, thematic evenings, and master classes; in April-May, the museum saw six different exhibitions. Therefore, it comes as no surprise that it in a desperate need of extra space; so far, people of limited mobility simply have no access here, there are staircases all over the place. 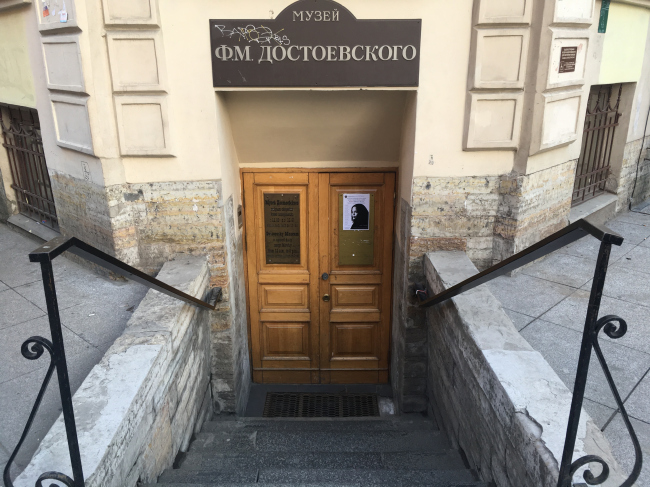 In December of 2017, the director of the museum Natalia Ashimbaeva and the architect Evgeny Gerasimov, in collaboration with the businessman Andrey Yakunin (the son of the former head of the Russian Railways and a co-owner of the VIYM company) created a nonprofit foundation “Petersburg of Dostoevsky”. Andrey Yakunin handled the fundraising issues, Evgeny Gerasimov developed a concept of the new wing of the museum for free, and he is planning to complete the entire project also on a charity basis. The organizers stress that the project is a nonprofit one; the building will be handed over to the state. Donations are being collected; the approximate anticipated cost of the construction is 700 million rubles. In April, the architectural concept was approved by the Smolny.

The foundation is planning to build the new wing next to the museum: in 1971, to the left of it, a house was dismantled – it was a tenement building of pretty much the same kind, looking very much like the Dostoevsky museum – and there are plans for building the new wing in its stead; the size of the wing will be very close to that of the demolished house, meaning, it is practically going to be a regeneration project. The local preservation activists were vocally critical of the whole thing, specifically, on two points: first of all, the two lawns on either side of the driveway are inside the new construction blueprint. These lawns have already been excluded from the list of “public landscaped areas” but the critics of the project consider them to be a piece of parkland, while the director of the museum Natalia Ashimbaeva, on the other hand, claims that the formal size of a park, in accordance with the effective legislation, is 400 square meters or higher, and the lawns are smaller than that. The real little park with full-fledged trees will be preserved and landscaped inside the yard. The current yard of House #7 in the Kuznechny Alley. The tree on the right will be preserved / Photo courtesy Evgeny Gerasimov & Partners The construction site of the new wing is marked in red. Concept of developing the Dostoyevsky Literary Memorial Museum. View of the museum from the Marata Street © Evgeny Gerasimov & Partners

Another, more interesting, issue is the modern style of the proposed architecture of the new museum building. Accusations came up to the effect that the project is “killing the Saint Petersburg of Dostoevsky” because it violates the fabric of the old houses in this area. Some people proposed to restore the house, which was torn down in 1971 and let it host the museum.

However, this solution is fraught with a few paradoxes, though predictable. First, the foundation wants to present the building with a museum, and, although, museums and nonprofit projects are usually a welcome thing, in this instance the public protests. Second, Evgeny Gerasimov, known as the author of many serious stylizations, wants to build a modernist building of the museum, and he is criticized for that. One more thing: competent architects would be unlikely to criticize their fellow colleague for such a solution because – and that’s important – unlike in the times of Roman Klein, who designed and built the State Pushkin Museum, today it is not a common standard to design museums in the style of historicism. True, there are exceptions, but these are few and far between, for example, the Museum in Yoshkar Ola. The guarded attitude of the people of Saint Petersburg towards modern architecture is something that is widely known; a lot of people believe that in the context of the historical construction you can only build in the historicist style and stylizations in order to avoid violating the integrity of the city environment. However, on the one hand, over the last half a century we saw the forming of the notion of “environmental modernism”, the kind of architecture that is modern but still unobtrusive of its context and delicate enough to adjust its parameters (like height and proportions) to it, and rather neutral without being garish.

On the other hand, a museum is to some extent the paragon of modern culture, a place where it gives meaning to – and in many ways stresses – its difference from the culture of the past, setting itself against it and studying the true artifacts. While in the XIX century a museum would oftentimes use stylizations in order to immerse the visitor into the atmosphere of the epoch that it represented, becoming a theater of sorts, today the last thing that museums want is imitation. Everything that is new in a museum is ostentatiously new, any kind of stylization is perceived as a recently-hacked fake and an insult to the museum cause.

Evgeny Gerasimov has a few more arguments against repeating verbatim House #7 on the Kuznechny Alley. If this building is to be recreated to a letter, it will not be able to serve the function of the modern museum – at least because of the fact that most of its windows will be blind imitations because the two bottom floors (as is planned) will be occupied by the theater auditorium, whilst the two upper floors will be occupied by a lecture hall and a library. Out of the whole set of functions, only the exhibition premises need sunlight, and even these do not always require it. The second argument: the surrounding environment is historical and classicist, yes, it is true, but it does not at all belong to the times when Dostoevsky lived in the Kuznechny Alley! The “InzhEkon” building is neoclassicism of the 1910’s; the Kuznechny Market is the neoclassicism of the 1920’s. This argument, however, is but secondary; it is clear that what matters for the architect is the museum typology, which nowadays allows of no stylization whatsoever.

Evgeny Gerasimov gives examples of modern museum buildings: small, neatly inscribed into the city environment, merging with it in terms of scale and proportion, and not trying to conceal their age. One of such buildings is the Museum for Architectural Drawing in Berlin, founded by his long-standing partner Sergey Tchoban. Probably, these examples, which helped the architect to place his idea into the context of the museum construction typology, are one of the main components of the concept.

Otherwise – Evgeny Gerasimov stresses – the project is but preliminary, “only a concept”; the inner organization is currently more detailed than the façades. “An active search for their design solution is underway” – the architect specifies. Therefore, one can only speak now about the “treatment of metaphorical meanings of architectural solutions” – the company states.

What is known as of this moment?
The contextual traits: leveling out the height of the building at the mark of the cornice of the old house; the slicing of the wall in accordance with the floors will most likely be preserved, just as the highlighting of the entrance by the vertical of the atrium.

The new wing will merge with the old building but at the same time it will be separated from it by an atrium that will on the inside look like a small dead-end alley with a panoramic elevator at its end and a stained glass window on the street side. “The atrium all about the image of the “water well” yard as the inside of the human soul where most of the writer’s novels take place – Evgeny Gerasimov explains – Dostoevsky would drag out into the light the darkest secrets of the human soul, which are usually hidden deep down inside, and because of that we bring the “water well” yard to the foreground” – the architect stresses. The windows of the two buildings – the old tenement and the new museum – are looking at each other over a narrow space of the atrium yard, giving the visitor a cramped feeling. There is a boardwalk between the buildings as the symbol of a transition, a “teleport”, a bridge between the old and the new or even the symbolic mirror between the museum house and its new reflection.

“The true memorial part of the museum will stay in the old building – the architect shares – And the new wing is meant to attract the readers of the new generations. There is Dostoevsky as a realist, and there is Dostoevsky as an innovator; his creative writing sort of was refracted through the prism of time. And we treat this boardwalk as a transition from one epoch to another, a metaphorical teleport, the atrium being the portal for leaping through space and time”. 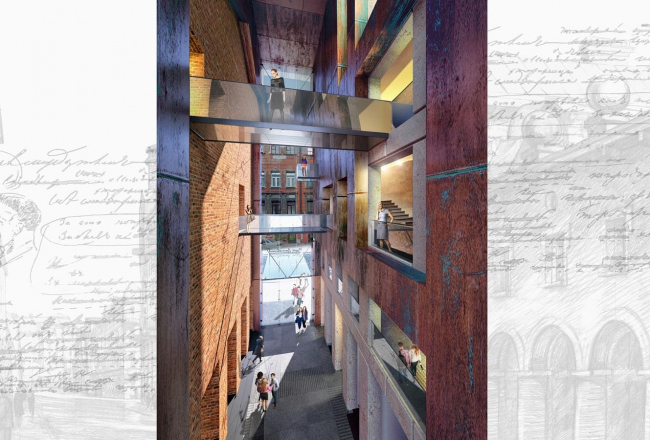 The façades are something that the architects prefer not to speak about – they say that they are not quite finished yet – but it is already clear that the laconic and modern solution become a point of honor for Evgeny Gerasimov. It must be said that this story with the project of Dostoevsky Museum is not the only example in the latest history of the Russian architecture when the public votes for the recreation of a lost building, while the architect votes for the up-to-date solution. Given the knowledge of Saint Petersburg conservatism, one could suppose that the concept is in for a lot of difficulties – but then again, any idea needs to be grounded and honed to perfection. What if when the project is ready its exquisiteness will win over its opponents and it will get Saint Petersburg closer to the view of the European capitals on the development of the city’s historical context, and will make possible a peaceful coexistence of the new and the old that only enriches the environment?

Currently, the foundation is settling the legal issues connected with the land plot. Next on the agenda are the project stage and its discussion in the Town Planning council and the Cultural Heritage Preservation Council. The construction is scheduled to begin in the first quarter of 2019.
Text by: Evgeny Gerasimov, Seraphima Lvovskaya
Translated by Anton Mizonov