Boasting a unique set of features interconnected in a sophisticated way, this complex consists of ten different units. The Saint Petersburg architectural company A.Len designed it for Voronezh on the basis of the soviet sports center “Energiya”. 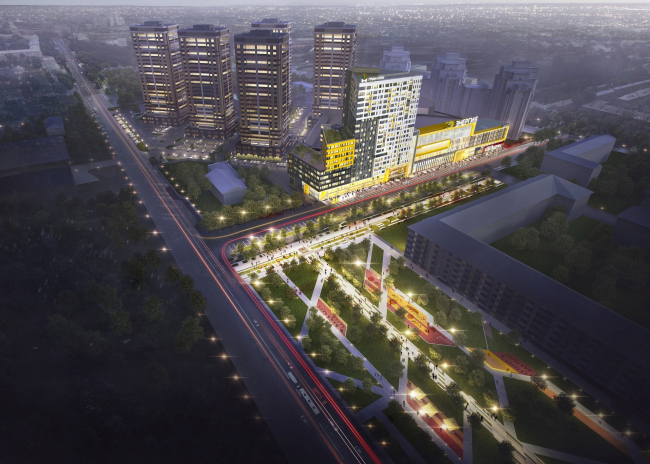 The sports complex “Energiya” was built back in the 1980’s. Originally, it was planned that it would become a regional center for track and field activities, team and water sports, martial arts, and dancing. However, these plans were thwarted by the perestroika turmoil. Maintaining and operating a huge building with a floor space of 170 hundred square meters turned out to be prohibitively expensive, and the complex was all but neglected. The Khamina Group that bought out this land site for 250 million rubles came up with a plan that included, among other things, building on the vacant part of the territory five residential towers with subsequent financing and reconstruction of the former sports center into a modern multifunctional complex maintaining the original sports function and including residential premises, a hotel, shops and cafes, a cultural and business center, a parking garage, as well as integrated landscaping and creating a green park with a monument to Russia's first champion in figure skating. The project of the complex was designed by the Saint Petersburg company A.Len. 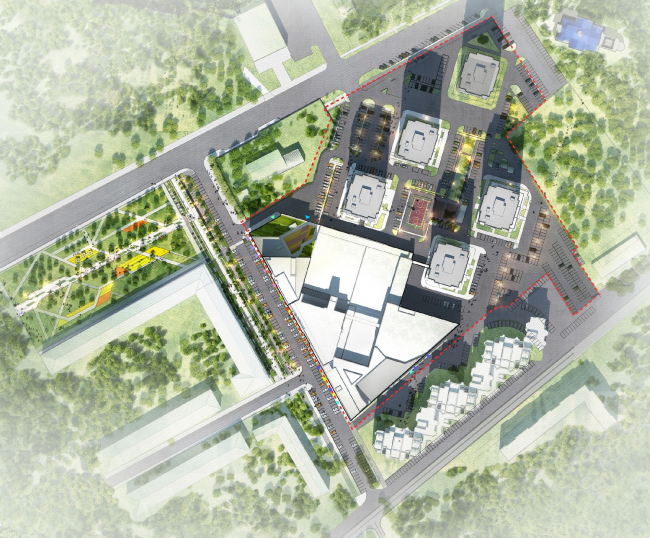 The number of functions that the architects were to combine within this project called not only for complexity of a multilevel structure saturated with various zones and premises, each of which would have a set of parametric and technical requirements of its own (never mind the fact that some of these zones would have to be isolated from, and some – interconnected with others), but also for the necessity to observe the safety rules and regulations. THe structure of the multifunctional complex "Five Stars" © A.Len

In the center of the triangular construction blueprint, there was the old building of the sports complex. Some of its structures were kept intact, and some were dismantled. New sports blocks were added and inserted into the “historical nucleus”, as if enshrouding it and filling in all the lacunae. As a result, the total floor space of the sports part of the complex amounted to 260 hundred square meters with an estimated number of visitors being up to a million per year. The list of sports traditionally popular in Voronezh was augmented with a few new formats. The future center will include 40 modern gyms for team sports: handball, volleyball, mini-football, badminton, and table tennis. These were joined by a modernized 16-meter high rock-climbing wall, a gym for martial arts, two fitness clubs, and four swimming pools, two of which are 25 meters each with five and six lanes, as well as dance practice halls. The architects would put together the volumes and functions, as if putting together Tetris pieces of different sizes and shapes. In addition, the customer planned to place one of the large swimming pools on the level of the first floor on the street side – so as the passers-by would be able to see the swimmers behind the immense “showcase” windows as a sort of a living advertisements of the fitness club, and the healthy lifestyle as well. Closer to the Voroshilova Street and the beginning of the “sports” park, the architects placed the residential, business, and representative functions. Like in a ball of yarn, entwined are the club house “Grand Prix”, a business center of the same name, a congress hall, and a hotel: they soar upward, forming a high-rise centerpiece that accentuates the complex in the panorama of the city.

Across from the business part of the complex, along the Delegatskaya Street, there will be a landscaped park with a backlighting system whose design solutions and the quality of the materials used will match the top-of-the-line Moscow analogs. On the opposite side, the architects placed a shopping center with a large supermarket and a traditional set of shops and businesses. There are also a multilevel parking garage and a parking lot nearby.

The outside appearance of the complex matches its inside structure. The function of each of the blocks can be easily read from its size and glazing type. The huge stained-glass windows highlight the public zones: the sport segment, the business center, the retail, and the cultural zones. The modern-style multitude of differently sized window apertures adorns the façades of the club house and the hotel.

The golden-yellow anodized aluminum of the façade panels serves as the metaphor for the complex's name of “Energiya” embodying a lightning-like flow of energy. Backlit at night, the golden band “snakes” over the façade framing the outstanding fragments of the building and connecting individual blocks. In addition, the bright yellow backdrop will hold the signs of shops and cafes – it is meant, on the one side, to attract people’s attention, and, on the other side, give the high-profile part of the building a kind of integrity uniting the colorful diversity of brand signs and logos with a single-color golden background.

Thanks to the cooperation between the developers and one of the leading Russian architectural companies, Voronezh saw the process of implementing a concept of a new type of a regional community center that creates favorable conditions for business, as well as for cultural and sports recreation. The role that was played by the soviet sport clubs or neighborhood movie theaters is now, at a new level of social development, is played by multifunctional complexes. The search for sustainable formats for such synergy systems is on not only in the nation's capital but also in the main regional centers. And already in the nearest future one will be able to appreciate the fruits of turning the derelict sports complex into an epicenter of business, sports, and cultural life of Voronezh. 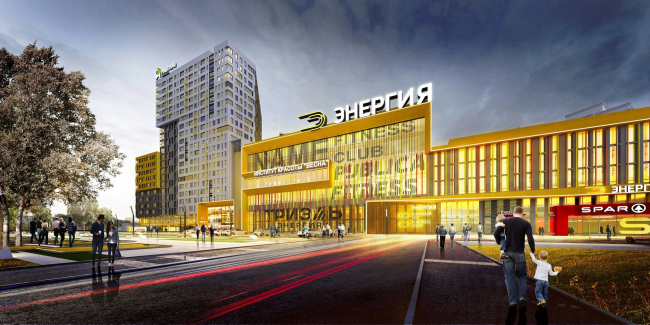