Kiev's bureau “ARCHIMATIKA” has developed a project of a shopping center in Novosibirsk. The source of the architects’ inspiration was a cedar cone. 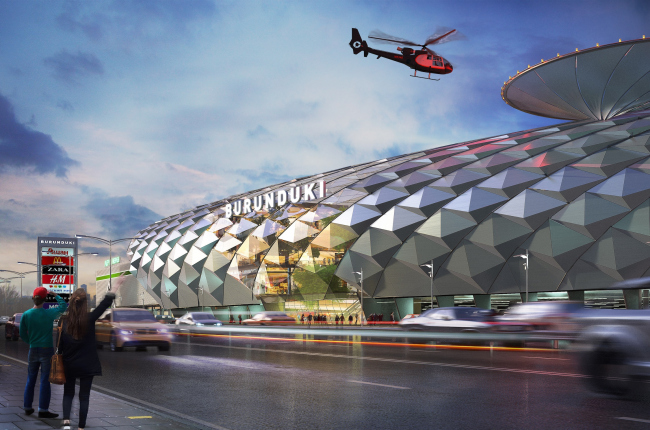 The concept of a shopping mall under a cartoonish name “Burunduki” (rus. Chipmunks) proposed to place a large sales floor area (around 130,000 m2) on a completely empty territory at the exit of Novosibirsk. The area is secluded and empty, non-limiting to the architects, but is located on the highway connecting Novosibirsk itself with Akademgorodok and Berdskoe included in the agglomeration. The traffic on the highway is rather heavy so there will be no shortage of visitors. 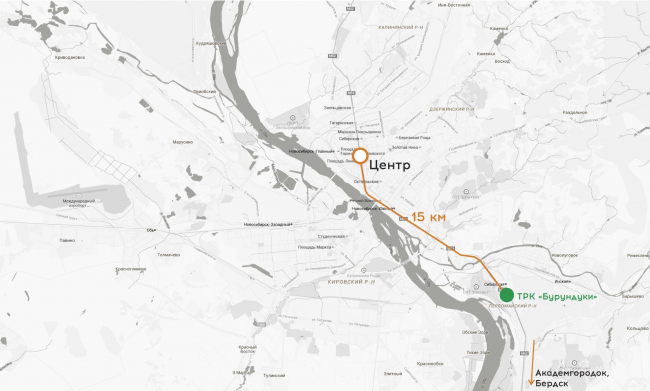 Shopping and entertainment complex "Burunduki". Location plan; distance to the center of the city. Project, 2015 © ARKHIMATIKA The customer liked the complex and creative approach used by Alexander Popov and Dmitry Vasilyev in the project of a shopping mall “Respublika” in Kiev (which is not yet finished due to financial shortage), so he asked the architects to make a project, which would answer the functional program of the complex. This program has been developed by the specialists of UTG Company and is quite a standard one: a four-level space with a parking lot, shopping arcades, food-courts and entertainment facilities united around the central atrium. Nevertheless, the architects found a way to make their project stand out from a large number of already existing shopping malls and those under construction in Novosibirsk, both in function and quality. “All our solutions must be interesting and attractive not only from one point of view, but from several points simultaneously,” reveals Alexander Popov, the co-founder and director of “ARCHIMATIKA”, the secret of their success. “If you only take one factor into account, it will either turn out too expensive, which is absolutely impermissible today; or will not be most effective from the functional point of view, which will not add any competitive advantage either”.

One of such solutions was to give up on the usual underground parking lot: unexpectedly, the whole ground floor has been allocated for the parking. First of all, this allowed to reduce the price of construction in the conditions of severe climate. Secondly, the site is located on lowland and the owners would have to constantly face problems with subterranean water. Third, the highway lies two-three meters higher than the site, and the artificially lifted main volume of the complex can be “read” much more easily from a window of a passing car. Finally, the architects considered that it would be easier for the visitors to find their way around and park right under the needed shop, quickly go up and not have to push the heavy cart all around the parking lot. The problem of goods delivery and unloading that occurred due to such layout, is solved with help of a special ramp at the back of the building. The space under it will not be wasted either – it will serve for more parking places. Another significant aspect is great attention to the public function. Whether we want it or not, shopping centers increasingly become the place for long family pastimes, and the question of quality of the environment and the level of entertainment in this case is important for the project success. “Of course, one must not forget that this is a certain compromise, a closed space with controlled microclimate will always be inferior to an open public city space. But there are so few of such places for leisure and entertainment in our cities, and the weather is so unpredictable that creation of roofed atrium public spaces remains necessary,” says Alexander Popov, “only if due attention is paid to the quality of the created area; both in the functional, as well as architectural and design aspects.” Indeed, besides the standard set of cafes, restaurants, amusement facilities and a movie, the shopping mall offers a concert hall, an oceanarium, exhibition areas, an interactive scientific museum and a topic-based park for children “Minopolis”. More than that, two helicopter landing sites are scheduled on the roof, one of which will actually provide additional transportation opportunities for long-distance haulage, and the second one will serve as another amusement for the visitors. And, all of this is not thought of as another eye-catching, but actually useless “toy”. The architects are ready to give up on the idea completely if it does not turn to by fully functional. 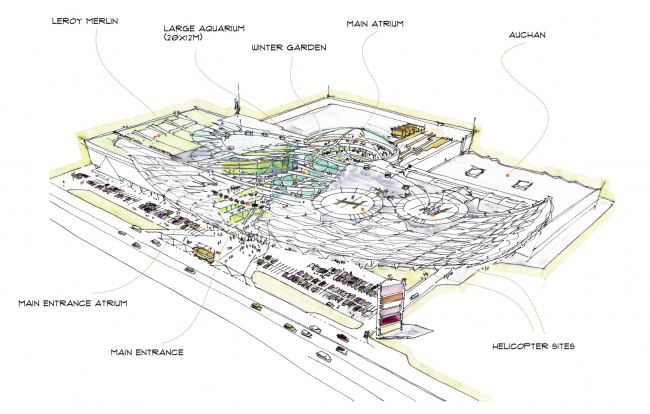 Surely, the solutions for the exterior have to actively demonstrate modern, technologically and aesthetically sophisticated contents of the complex. On the other hand, the façade has to represent the brand of the shopping mall stated in the name “BURUNDUKI” (Chipmunks). But, what’s to be done if, as evolution has willed, chipmunks have not shown themselves either in technical, or aesthetical progress (for now)? On the other hand, these thrifty little animals who collect only the best nuts – how in sync with the concept of a mall! – live in local forests and love cedar cones. So, the architects shifted the accent and drew the spectators’ attention to this specific familiar product of Siberia. The complex constructions are to be made of reinforced concrete with use of metal structures for bridging of large spans. All this will be covered with practical sandwich-panels ensuring the necessary functional performance. And only then comes the shell over the rather simple and inexpensive “box”. Its structure reminds the scale of a cone. On the façade, it will be made of aluminum and on the roof over the atrium – from glass. “Of course, nobody wanted to create some comic, folklore image and build an actual giant cone. It is rather a “cosmic dream of a chipmunk,” smiles Alexander Popov. “I hope everything will work out and the futuristic carcase will have something “delicious” inside to offer”.
Text by: Aleksandr Popov, Dmitriy Vasilyev, Anna Starostina
Translated by Anton Mizonov 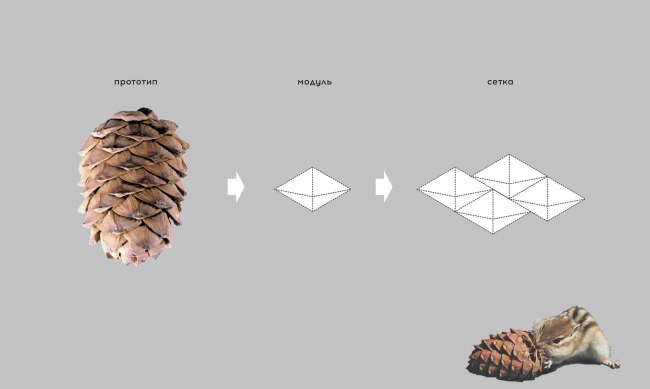 Shopping and entertainment complex "Burunduki". The searh for the facade design. Project, 2015 © ARKHIMATIKA 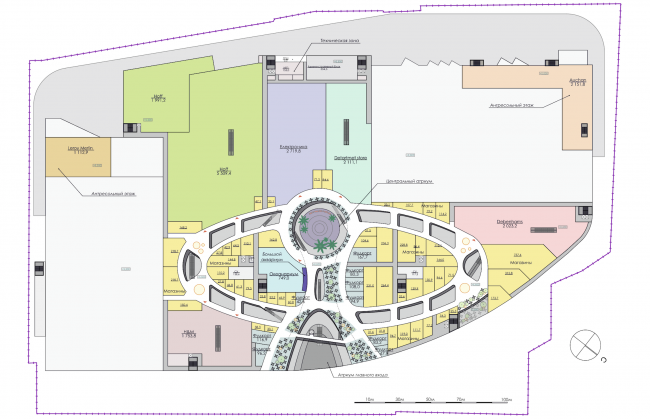