A modern version of a yurt, a Garden of Eden, a waterfall-house and a gigantic aqueduct – all of it can be found in the new technopark “Ishim” is Astana in the project of Totan Kuzembaev’s bureau. The ceremonial and administrative center of Astana is built in a manner of a wide boulevard splitting the city from West to East: it is stretched in a straight line from Han-Shatyry shopping-center constructed by Norman Foster, to the presidential palace of Nursultan Nazarbayev, across the river to Independence Square, to the – yet only planned – Millennium Alley, and ends with the train station, currently under construction. To the East of the train station, more precisely – between the future station and the large golf-club, already open and very popular in the city – it has been decided to build a Technopark “Ishim”. The concept of the park has been developed by Totan Kuzembaev’s workshop.

The Ishim River is a lowland one, naturally very winding, with frequent floodings and back-waters – crosses Astana like its new axis: from northwest to southeast. But in its eastern part, the river-bed is aligned and headed towards the new storage pond arranged by the city as a competitor to the old one (built in 1969) – Vyacheslavinskoye – located 25 miles further. The distance between the future technopark and the storage pond – 20 miles away from the city center – is 6 miles, and the straightened river-bed of the Ishim flows close to the southern border of its territory. In this way, it is beaded onto the central city axis, and at the same time turns out to be part of the parking and recreational areas, and a neighbor to a successful golf-club and the adjoining luxury settlement, that must be populated by golf lovers. In short, if set in order, the territory is green and full of water. So it was decided to combine the technopark with a health resort area. The architects placed business and commercial buildings around the perimeter which, in plan, reminds a triangle, since it adjoins to a crossroad of two planned highways. The northern corner – almost a third part of the whole area – is occupied by a building which combines the functions of a hotel and a residential house. It is constructed over the bed of a narrow river alined along the perimeter of the main river Ishim and turned into a channel for drainage of the area. It easily “oversteps” the river letting it flow between the large pillar-towers. Typologically, it is a version of a horizontal skyscraper allotted with multiple archaic associations: the building simultaneously reminds an aqueduct (however, there are no aqueducts that are semicircular in plan), Stonehenge megaliths and ruins of a park, since it is arranged on a trimmed grassy glade. It is rather geometrical and made completely of glass, but the torn roof line – that echoes the contours of the surrounding mountains – is covered with green. Free association suggests the semi-conscious stories of flourishing settlements and wars against nomad tribes, about Tamerlane and the ruined irrigation of mediaeval countries – as if we are standing before the remains of lost ancient culture or, rather, its shadow. Along the two roads and the third border of the territory, Olzhas and Totan Kuzembaevs arranged three similar long buildings (one of them is an educational and exhibitional center). They look outward with technogenic stained-glass windows, through which floors looking like ribs of a giant animal can be seen. The end walls are made of large vent façade panels reminding scale of some giant reptile, mountain slit texture. The roof and the inner façade of every building form together a dencely tree-planted slope with waterfalls which ends with a long flat bottom – made of concrete but vastly covered with large trees. In some places the slopes are adorned with waterfalls. Its likeness to “The Lost World” is quite obvious and intended: inside, the glass facades form a “bowl” that secures moist from the steppe wind for this piece of heaven’s nature. This is cleverly done: it is planned to arrange an eco-park with a botanical garden and nursery of rare plants of Kazakhstan inside of the “bowl”, where the grass, trees and waterfalls will allow to maintain comfortable temperature and humidity. It is planned to apply eco-technologies as vastly as possible: at least there will be fully automated power supply systems, heat collectors and solar batteries. 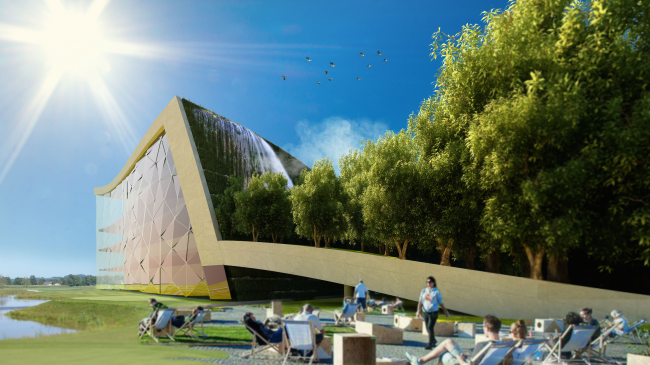 Amid the park with rare plants and a humid micro-climate hardly reminding a steppe, there is a chain of villas forming a lopsided horseshoe. From above, this line of one-storey houses standing on the ground (more precisely, on wooden platforms) reminds either mushroom caps (“pixy-ring”), or pebble laid by nomads in the moss for some kind of a magic ritual: if this be the case, the two largest ring-shaped villas in the middle must be the eyes of – let’s say – the spirit of the earth. In other words, looking from above, the villas form a geoglyph, a mimic of some pre-Abraham steppe temple, which quite suitably echoes with the megalith-hotel.

On close inspection, the villas are executed fully in Totan’s style. The carcass is wooden with frame structures, the plans are roundish (remember the peddle). All houses are surrounded with wide terraces: in the Kazakh language such sheds are called “kerege”. In some places, the wooden bearing walls of the house are covered with felt – “taurlyk” in Kazakh. By the way, felt is the basic construction materiel of a yurt. The terraces are screened with diagonal grates from the outside. They equally remind a european pergola (sure, they can be twined with ivy) and the structural base of the yurt (which was traditionally covered with felt). After all, Totan Kuzembaev is a Kazak, and time after time he reembers it: for example, in the interior design of a yurt in Venice; and here it was absolutely necessary to recollect the nomadic roots. The Kazakh dwelling is taken as a basis, but at the same time, it has been turned inside out: the grates are outside, and the felt is inside, and there is no dome. The likeness turns out to be indirect, not literal, and in a way, maybe it is even a deconstruction of the image of the yurt and becomes a summerhouse. After all, it is a health resort area, the Garden of Eden, the essence of Kazakh nature. It would be a sin to hide away from it behind the felt, since it has already been closed up by "mountain" buildings. The architects suggest four types of villas. They called the largest, ring-shaped eyes-houses “Mirabelle”; their area is 5400 ft² and in the middle, there is a courtyard with a small pond. As it has been already mentioned, there is enough water here and every house has a small pond, or a spring under it. The smallest house is “Ueno”, with an area of 1400 ft². It is also the most minimalistic one. Larger houses, “Tikal” and “Fiordland”, are intended for big families with children. All types of villas can alternate in any possible order; each has an exit leading to the eco-park, which will soon not only have play- and sportsgrounds, but a botanical garden and a nursery of rare plants of Kazakhstan. Of course, the park will be equipped with running tracks and cycle lanes (in winter they will turn into a long ski track), tennis courts, areas for public events, various restaurants and cafes, a fitness club and a pool – in a word, everything that a modern person associates with a healthy and comfortable lifestyle. 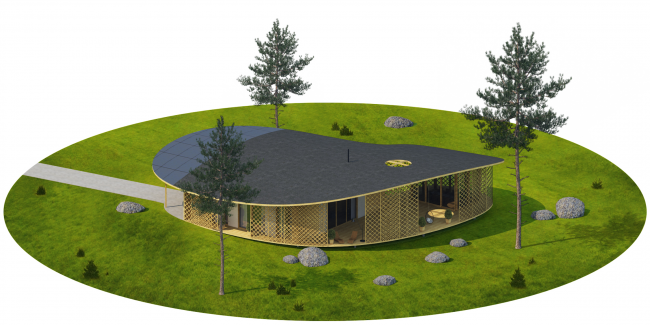