The project by Julius Borisov was shortlisted to become one of the ten finalists of the contest for the memorial to the victims of political repressions.

The contest was announced in the spring of this year, and caused a lot of controversy at once (see the article by Gregory Revzin (Russian)). All the projects of the memorial can be seen at Novaya Gazeta website. On the 16th of October, the ten finalists were announced, and still later on the judging panel announced the first three places (in this same article one can also read about the numerous members of the judging panel). The Julius Borisov project was not among the leading three - we are publishing it here as an example of not so much sculptural as space-wise solution of the contest task.

The monument was to be erected at the crossing of the Sadovaya-Spasskaya Street and the Sakharov Avenue, in the little park with blue spruce trees before the former building of the computing center of the Ministry of Aviation Industry of USSR, now belonging to banks and insurance companies. Barring the proximity of the Sakharov Avenue, the place for the monument was all but casually chosen. In the course of the mentioned discussion, an opinion was several times expressed that it would be more appropriate to erect this monument, say, at the Lubyanka Square (where the KGB building stands) instead of the Felix Dzerzhinsky monument. However, the participants of the contest had to work with what was offered to them, specifically, with a territory situated at the crossing of two three-lane thoroughfares with their cars either speeding by or crawling locked in a traffic jam. The place is hard to reach on foot, either. 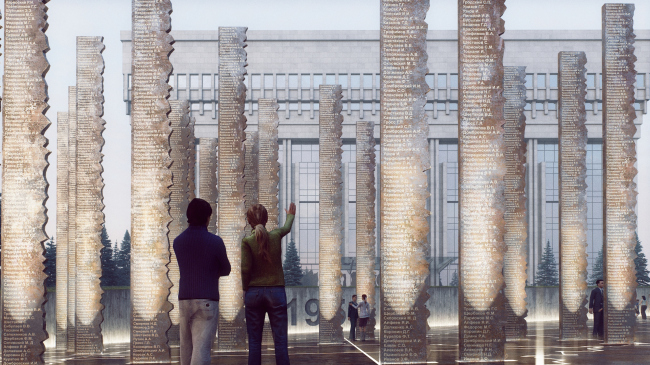 Julius Borisov proposed to fill the square with a thick "forest" of stelae of artificially corroded metal with lists of names of repressed people. The stelae are two if not three times human scale, 4 to 5 meters tall, their right side looking torn. This symbolic "stelae" graveyard is meant to speak of the scale of the tragedy. The square is paved with metallic slabs that bear engraved glowing contours of the USSR. If one watches from above it turns out that the stelae are placed not in an arbitrary way but in the places of the concentration of the forced labor camps. A person walking among these monuments will be semiofficially immersed in the space of the prison of a country. 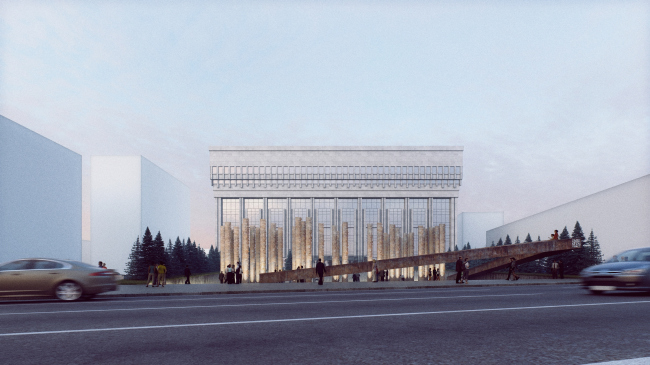 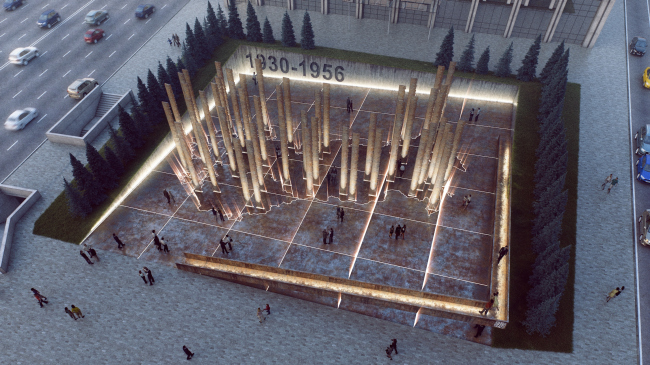 For the person to see this contour map and appreciate the logic of the stelae placement, Julius Borisov proposes to ascend the gallery bridge made of the same corroded metal that symbolizes the convicts' path to the labor camp. The landing of the monument is not elevated but is sunken in, cut out from the park's soil. Descending the bridge, the visitor finds himself in the lowered southern part, in the territory secluded from the city bustle, where he can read the engraved names and immerse into the atmosphere of mourning. Along the contour, according to the architect, the blue spruce trees must be preserved, while the inner cutaway must be coated with brutal concrete with traces of floor boards. The combination of rough concrete and aged metal is meant to create an atmosphere of mourning, besides - "it was mainly these materials and technologies that the forced labor camp convicts had to deal with" - the description of the project says. In the concrete, two dates are cut out: 1930-1956 - the years that GULAG existed.

"Participating in the contest for this memorial project was rather a new experience for us because we are more used to working with commercial projects - Julius Borisov says - The sheer fact that we made the top ten list goes to show that we understood the task in the right way and came up with an adequate answer to it".
Text by: Yuliy Borisov, Tatiana Timofeeva
Translated by Anton Mizonov