The idea of a skyscraper as the prototype of a vertical city was introduced by Rem Koolhaas still back in the seventies. In his book 'Delirious New York', the architect describes Manhattan as a place devoid of any architectural theory, a place where a skyscraper bears the potential of an autonomous settlement, a "city within a city". Over the last fifty years, the skyscrapers have not only grown in height setting ever new records but also have significantly expanded their range of functions successfully combining office premises, hotels, and shopping galleries.

The architects generally perceive skyscraper projects as a means of making a plastic and conceptual statement. PANACOM Bureau and its leader Arseniy Leonovich made such a statement in their skyscraper project entitled "Tree of Life/Hyperion". It was developed for Skyscraper Competition organized by eVolo Magazine. The annual competition has been held since 2006 to propagate the idea of new understanding of the vertical city through the use of new technologies and materials, aesthetics and organizing the building's inner space, as well as through setting a new order of interaction between the nature and architectural objects. 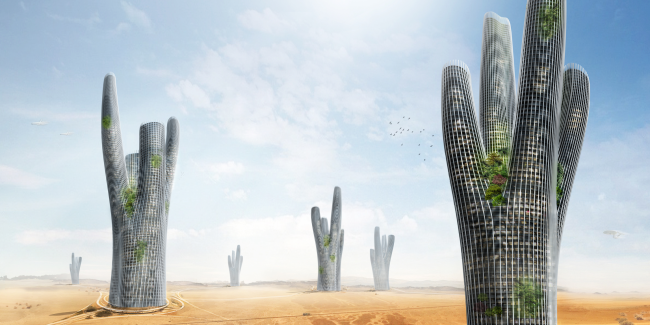 "Our skyscraper is a Tree of Life of its kind, one that emanates the creative energy and living force; one that gives us as humans the power over the nature and its energy resources" - shares Arseniy Leonovich, the author of the project. One of the peculiar features of this building is the fact that its main bulk branches out into three-four "offshoots". At the junction point, a space with a micro-landscape of its own is formed. For building this skyscraper and maintaining it later on, numerous sustainability technologies are used. Some of the construction elements, girders in particular, can be made from a bio plastic that yields to none in its properties to metal. For maintaining the environment and the special climate of the "Tree of Life", alganic-based technologies can be used. The brown sea algae absorb carbon dioxide and emit oxygen. Their plantations are placed in the translucent systems of pipes running over the facades. The building's energy needs are satisfied by the solar batteries and the super-compact devices that synthesize and accumulate different types of energy. This way, the "Tree" fosters a symbiotic relationship between man and nature. The inside and the outside spaces of the building are connected by pedestrian trails, creeks, and small coppices with offices, shops, and concert halls. Thus, "Tree of Life" can even grow in a desert, on a stone island, and even in the concrete jungle.