A new building on the Kulneva Street, next to "Mirax Plaza": the geometry of sharp shadows, glistening lights, and the shades of mature modernist techniques - all reminds about the fact that the new building occupies the place of a former seventies predecessor. The new building of the multifunctional complex President Plaza of "A" class on the Kulneva Street was put into operation in December of 2014. Its large parallelepiped came in the stead of the production-and-administration building of Department of Presidential Affairs of the Russian Federation surrounded by the buildings of a large office center formerly known as "Mirax Plaza" and located across from the Moscow City between the river and the Kutuzovsky Avenue - although this particular building never was part of this complex, even if surrounded by it from three sides.

The construction of the two austere north towers of "Mirax" was started by Sergey Kiselev - President Plaza is located directly behind them and it is now perfectly viewable from the Third Transport Ring of Moscow. At some moment it might even seem that the new building has actually become the "finishing touch" of the "island" between the Kulneva Street and the TTR but this is not quite the case - when they build the elongated building of the former "Mirax" that, by the decision of the architectural council, is handled by Vladimir Plotkin, it will block the view of President Plaza with its volume. Ultimately, this place will get a complex designed by three different but still renowned Moscow architectural companies: Sergey Kiselev and Partners, SPEECH, and "Reserve". The plans of reconstructing the building of the Department of Presidential Affairs first came about in 2006. Since that time, the 1,3-hectare land site changed hands a few times. The construction would be frozen and started anew depending on the financial powers of the owner and the consideration of the increasing load on the city's transport network. Over this time, the projects of this parallelepiped on the Kulneva Street were done by Nikolai Lyzlov, Vagan Vermishyan, and, probably, a lot of other authors.

As for its rectangular shape, the building of President Plaza inherits it from its soviet predecessor - this way, it makes the most of the land site's potential. The rectangular volume 135x75 meters, seventeen stories high, with a total height of 68 meters, houses the maximum of useful space, the original plan being to fill the side parts with apartments. Later on, however, the architects gave up this idea and filled the whole building with offices. The broad construction blueprint requires a large inner courtyard - the soviet building actually had one, in the shape of a dull square around the empty core. The architects of SPEECH optimized the planning to a certain degree: their building has two identical yards, separated by a broad "lintel" with useful space in it which helped to significantly increase the overall amount of useful square footage. As for the yards, approximately 25x33 meters, with an area of a little over eight hundred meters - this is a little bit more than the average Saint Petersburg "well" yard - these yards are designed predominantly to achieve better insolation results. Because of that, the panoramic glazing of their smooth inner walls is only at times interrupted by the strips of intermediate floors, while in order to liven up these surfaces, the architects use two kinds of glass - the transparent and the colored type, mostly painted into warm tones: yellow, orange, and red, whose brightness is offset by the odd inclusion of the purple tone.

The first floor is given away to the shops and cafés, and the second - to the conference halls and fitness centers - this part of the building belongs to the city; besides, its eastern facade, together with the long building of the former "Mirax Plaza", will form the pedestrian street that will run inside of the complex - there is still a long way to go before we actually see it but we hope that it will become a nice and busy one. The other floors, from third to sixteenth, are occupied by free space offices grouped around the communication nuclei with stairways and eight elevators. 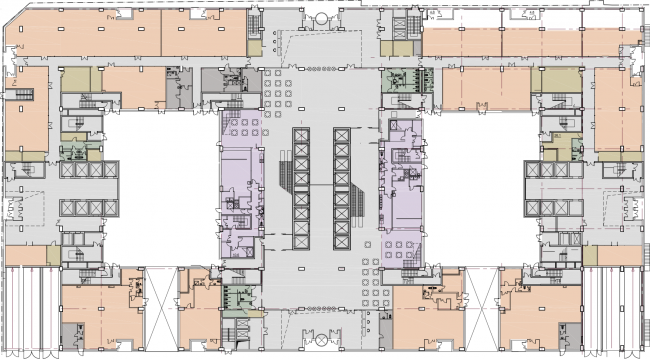 Plan of the first floor © SPEECH

The column spacing inside is 8.4 meters - this size, divided into six parts 1.4 meter each, became the module of the facade grid. This, however, is not the only thing that the inner structure of the building manifests itself with on the outside. The architects turn its only outside facade on the Kulneva Street and its adjacent south side wall into a moving mass of glass "televisions" of bay windows encased in silver frames of metal composite material. Some of the bay windows stand out from the wall 0.63, and some 1.3 meters - as a result, the large and the small ledges overlap, cross, and grow into one another forming a large, though somewhat irregular, asymmetric pattern. The facades look as if they were moving, like a chest of drawers with the drawers pulled at different lengths. This comparison is not arbitrary, by the way: besides their plastic expression, the bay windows add to the building's useful space and work to the customer's benefit. The square footage is increased yet a little bit more at the expense of the first floor standing out a little bit, supported by the slender triangular cantilevers. The cantilevers are only used on the "grand" facade on the Kulneva Street, and they add a twist of glamor to the building: the polished finishing metal glistens day and night, echoing the opaque glitter of the frames of the bay windows. 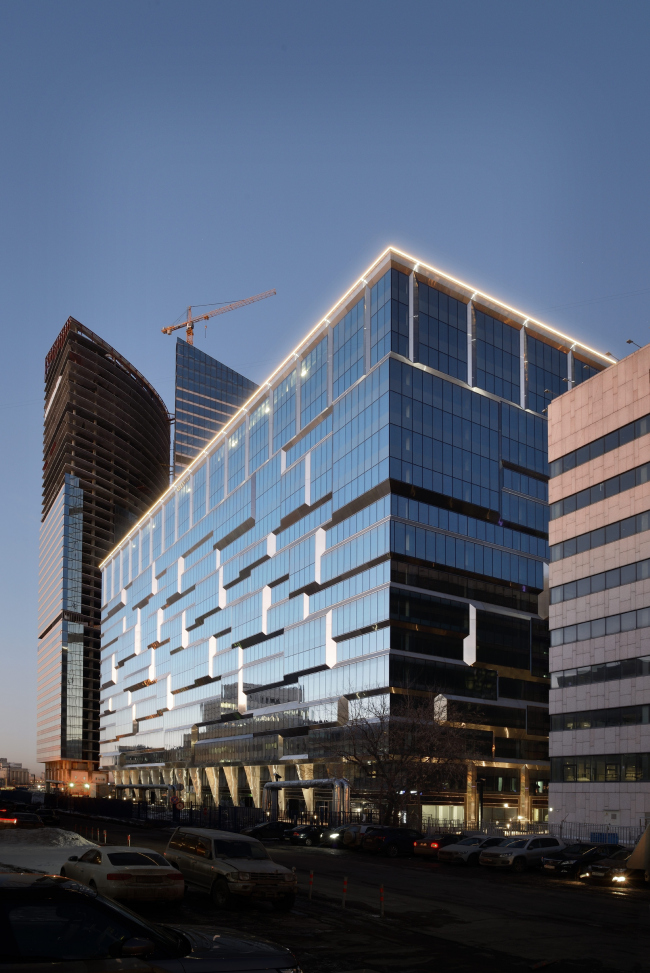 The two other facades: the north one, turned to the towers of "Mirax Plaza" and the east one that opens up on the future pedestrian street develop this theme without reducing it. The skewed silver "frames" of the "televisions" bleed together turning into protruding ribs to form a large-textured 3D ornament, although here its spacing grows a bit smaller. The metallic surfaces catch the light at different angles, the sharp ribs enhancing the contrast between the dark and the light tones to look like a geometric Grisaille picture that is backlit and livened up by the glitter of the glass background. Mostly, the tilting angle of the frames in respect to the wall is about 60 degrees but at times it gives way to a more gently sloping one - this is how the broad verticals appear that divide the grid; because of them, the pattern of the east facade looks a little like sand dunes undulating under the wind from the river. One might think that the glass caesuras of the east facade formed due to the fact that some parts of the rigorous metallic grid were "blown away" from their places. Although generally the grid remains firm and regular, offsetting the "shifting" of the glass-and-metal surface of the southwest part of the building. In their explanatory note, the authors modestly write that "it was not so much about forming an original architectural image, as about developing a world-class complex meeting all the mandatory specifications, and the original facade design that would harmoniously fit "Mirax Plaza", at the same time highlighting the independence of the new object". Highlighting the independence is something that the authors did succeed in. But then again, as we have already noticed, in this case the architecture is very sensitive to its environment, the main theme being not the Kutuzovsky Avenue but the brutal futurist search of the mature modernism, even the "classical" tones being read through the prism of the seventies here. The silver geometric grid of metallic frames that also looks a bit like an enlarged fragment of a printed board, along the wires of which the light signals run; the "television" bay windows; the slender concrete cantilevers above the bottom floors - this building has a flavor of the first Soviet Sputnik or maybe the Soviet science fiction movies of the sixties and seventies, which makes perfect sense: President Plaza came instead of a seventies building, and the entire opposite side of the Kulneva Street consists of, though somewhat worn, the characteristic facades of those days, where the "ribbon" windows alternate with the slender vertical ribs. On the other hand, a twist of modern mobility and the "various facade" quality help it to fit in with the surrounding cityscape: examining the building from all sides, one cannot help but wonder how, with all the pragmatism that we see here, the architects were able to successfully catch the optimum balance between the diversity and the integrity. From a distance, the building fits in with the array of the avenue, and, from a close range, it stuns the viewer with the play of glittering surfaces, so different from the warm-shaded Stalin-era terra-cotta.
Text by: Sergei Tchoban, Sergey Kouznetsov, Julia Tarabarina, Tatiana Pashintseva
Translated by Anton Mizonov Plan of the typical floor © SPEECH Plan of the second floor © SPEECH Plan of the typical floor with a parking garage © SPEECH