Architecture of a mechanism

We have already told about the project of a retail centre "Vremena goda" on Kutuzovsky prospect. Tis a very technically advanced construction, its south façade turned towards the highway is a computer controlled mechanical showcase. The building is completed, the up-market retail centre is opened and anyone can see it

First, Vladimir Plotkin planned to turn the main façade stretched along the prospect into a transparence showcase demonstrating interior of the shops – quite like to the retail centre “Kvadro” all the front façade of which is glass. Such construction is especially impressive at night - glowing box full of goods. But the client on some reasons refused the idea of transparent "open" façade and so there appeared a more complicated variant of the showcase – mechanized “closed”.

This façade consists of rectangles which alternate check-wise – half of them are glass showcases behind which there are posters on trinitron, the other half – metal panels with numerous square bores, there are placed lamps-leds. Lamp colors and turn of trinitrons in showcases are computer-controlled and can become a giant picture of the retail centre size.

Unfortunately nobody has seen the mega-buildboard yet, though all the mechanism work – says Vladimir Plotkin, the author of idea. Today these lamps as a rule of one color, according to a season, in winter they are purple, in spring they are green; sometimes there are shown plain images – snowflakes on New Year, flags for an election day. I can’t say about advertising returns, but it seems such use of the mechanism is equal to nailing by a microscope.

Anyway, mechanization turned the building of retail centre into a kind of house-machine, and facades take up the idea. Most of the exterior surfaces – where there are no showcases – is covered with metal grey panels, with small but frequent rivets. This makes the building look iron, it's like a bride, a war craft or even a ironclad train.

One might think there is a giant mechanism in front of us frozen in the process of transformation: glass of the building's end unfolded towards the coming cars, and almost as a captain’s bridge, there is a long and sharp balcony. On the front façade – almost like out of a gun aboard – on 3D height there are two glass bow windows. Armor of grey panels on façade evenly moved apart opening showcases with bright posters – but showcases stopped at an angle.

All these are just thoughts. Actually showcases are parted apart at an angle for posters to be better seen - upper on one side, down - on the other side. And there are no considerable moves. But the building has a story that maintains the idea of transformation of the imaginary “wonder of robot technology”. A delicate hint, not but very regularly, by matching right angles, squares and rectangulars (there are most of them) – and rare sloping lines. A slight slope, here around right angles, is a mark of movement. This is why it looks as if a nose have popped, showcases have extended. These are dynamical parts of the building-mechanism.

When we enter inside – sensations sharply differ. Outside there was a rigid outer world from which the house-mechanism is fenced off by the glamorous protection, but inside – there is gloss of a Pacific liner, only without carpets. The floor shines cleaner, than a scraped out deck, everything, from floor to ceiling, glows with whiteness. Right angles and lines are replaced by whirl – round supports-"columns", round atriums and show-windows. Dot lamps are placed on the ceiling by circles and are reflected in brilliant floor surface and show-windows of the passage, frequently repeating. Instead of quite rough imitation of “exterior” of mechanism inside – gloss and whirl, which in some degree force down those entering – probably, preparing for very considerable expenses (shopping is expensive here).

Intensifying the made effect, round "columns", sprouting through all the storeys, move up apart at slight angle. Or more precisely, supports alternate – around atriums they are inclined, within them they are at right angle, and look along the passage, there appears a unique colonnade, that alone reminds of a an alley of trees which never grow and stand vertically. Though there is nothing really biological here but vaguely seen play with perspective – atriums seem to be wide, more spacious if look from below and if you look from top – they are just narrowing. Round small yards are topped by cone-shaped domes similar to big pipes. "Pipes" are unfolded towards the south-east, trying to grasp more of sunlight for atriums spaces. And their turn takes us back to the idea of transformation of a huge mechanism. Well, building of the retail center was transformed into a huge hi-tech show-window. The building-showwindow, being designed technically complicated, has got some similarity to a mechanism, got peculiar metal texture and got into industrial roughness. It makes see some secret movement – both already occurred, and that will be, though actually there is no any slight movement at all. When we come inside, one impression goes after another, not very different, but contrast. White, transparent, whirling space beaded onto the four «air axes» of atriums, provides irrational lightness after sharp mechanism of facades – and as a result, it creates a proper mood for shopping. 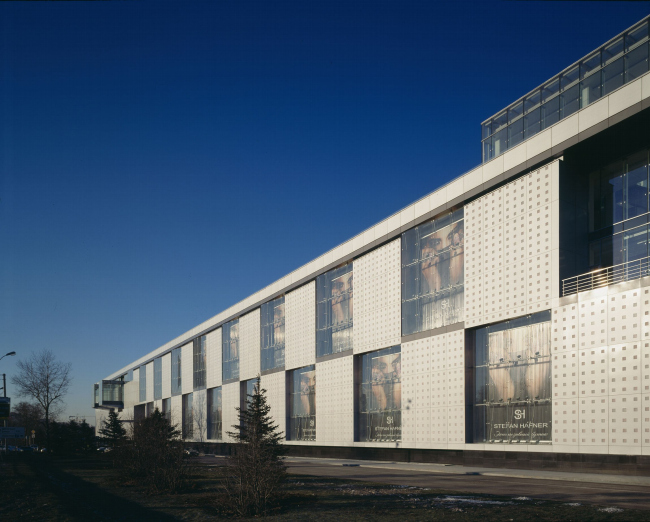 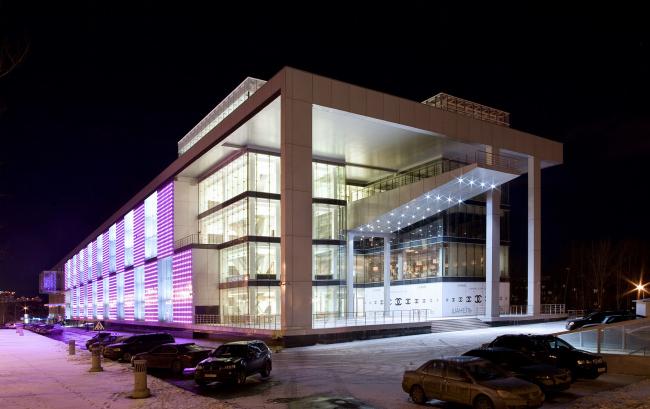