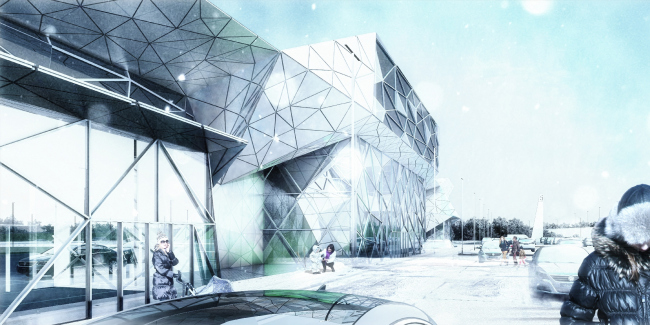 On the Dmitrov Highway, not far from the yacht clubs of the Klyazma Lake, a new shopping mall is built: the classic roadside retail store that will probably cater for the people of the residential area that now is only in the planning stage. Presently, besides the highway, its immediate surroundings include dachas, cottages, derelict fields, a piece of woodland and a few warehouses that actually belong to the customer that ordered this shopping mall: the idea to start the construction first came up back in 2008, and the project was even developed - but it was later on shut down for economic reasons. Last year, the subject came up again, and the customer turned for the new project to Institute of General Plan of Moscow that, in turn, invited Totan Kuzembaev to do this project.

Capable of housing a capacious parking lot, the elongated land plot stretches along the highway near the road junction that is also only in the making now - down the Klyazma River, in the direction of the village of Semkino. The three-story building of the shopping mall inherited its simple and rational, perfectly rectangular, plan from its predecessor; the operational planning-level design is done by another company. Totan Kuzembaev Bureau got the most conspicuous task of dressing the building into a "new costume" looking different from its "warehouse" industrial surroundings.

The three-dimensional futurist "shell" proposed by Totan Kuzembaev shrouded the building of the shopping center from three viewable sides making it look like some space-age flying apparatus that has just made an emergency landing in the fiends of Moscow area. Shining and glittering in the sunlight, its wings are spread wide quite symmetrically, while its "head" looks as if it were examining the highway through the stained glass on the level of the third floor. The central entrance is situated exactly in the middle under the awning of the "spaceship's nose". Two more entrances found themselves under each "wing". Their dynamic protruding volume creates a convenient awning that protects from the rain the promenade that runs along almost the entire building.

The shell looks incredibly three-dimensional not only because of its complex geometry but also thanks to the wall pattern that the architects chose. The abstract picture of diverse-looking and differently composed triangular aluminum cassettes enhances the 3D effect - the walls come alive literally in front of one's eyes forming fancy images that change depending on the lighting and the angle of vision. When this happens the jagged lines and the simple patterns start looking a bit like Rubik's Snake Puzzle: it seems that you only have to tug at one end to make another interesting figure. However, the austere color solution of the building created with eight shades of dark and light metallic takes us back to the image of a flying device - polished to the point of shining, powerful and impregnable.

Particularly sci-fi the complex will look at night. Each "thread" connecting a multitude of triangular cassettes on the facade will be brightly backlit. As a result, in the nighttime, enwrapped in a shimmering cobweb, the building will be transformed beyond recognition.

The building's shell is also functionally justified: its protrusions conceal all the communications, technical equipment, air conditioning units. Raised a bit higher up in the air, the north "wing" masks the movie theater halls on the third floor. The "loophole" of the panoramic stained-glass window above the entrance is also justified - behind it the offices of the management company are situated. Yet another two glass "screens" placed symmetrically on either side of the office block belong to the food court and the small but expensive stores. All the large retail stores will occupy the first and the basement floors.

Thus, the shifty, and even a little eccentric shell partially makes up for the excessive rationality of its inside space with a minimum-sized atrium and orthogonal planning of its premises. But then again, the striking-looking and reminiscent of sci-fi movies "mask" of the facades also plays its marketing part - as important as the dry calculation of the output of retail square footage: the glitter of the shimmering facets of the metal dragon will be impossible to miss even if one is tearing down the highway at full speed. And - it is not obvious at all that behind this sci-fi disguise, there is a regular rank-and-file parallelepiped of a Moscow-suburb shopping center.
Text by: Totan Kuzembaev, Alla Pavlikova
Translated by Anton Mizonov 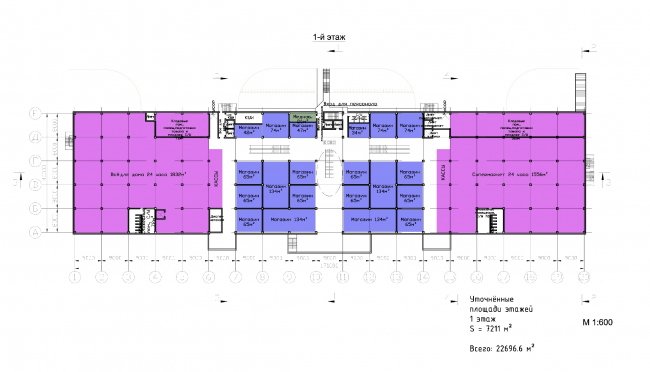 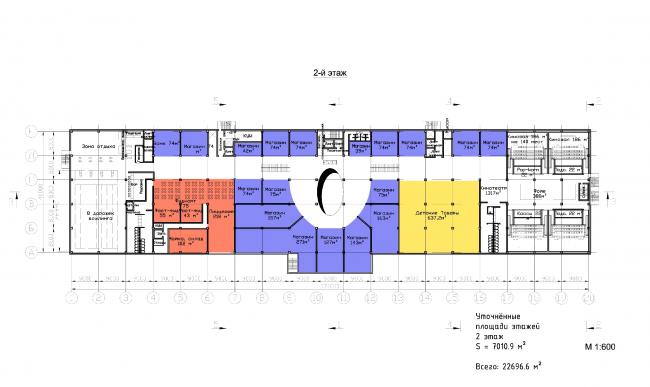 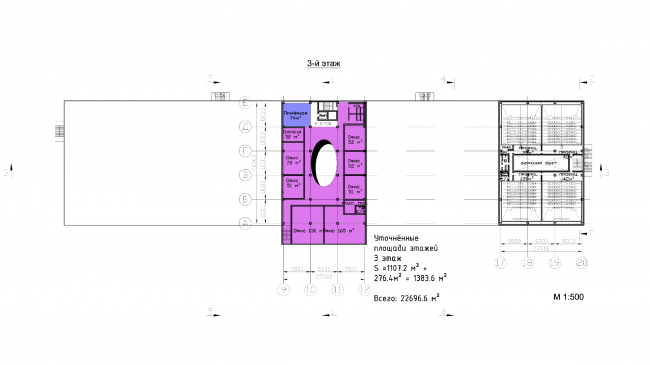