Empire of Enlightenment, Not a Military Parade

The book about the reconstruction of the Joint Staff reveals various aspects of the project that proposed a unique for the contemporary architecture approach to museum transformation - and quite an unconventional outlook of the very meaning of the imperial glory. Thames & Hudson Publishers (Great Britain) that specializes in arts and architecture and released, among other things, monographs on Zaha Hadid, Frank Gehry, and Steven Holl, published a book fully dedicated to one of the most famous museum reconstruction projects of recent years – “New Major Enfilade” of the Hermitage, organized inside the eastern wing of Karl Rossi’s Joint Staff - upon the project by the brothers Oleg and Nikita Yavein. The book summarizes a grand and a very successful initiative that, according to some estimates, extended over twelve, and, according to other estimates, over twenty-five years (the building was handed over to the Hermitage in 1989, the design work starting in 2002). In 2014, the second stage of the reconstruction of the eastern wing of the Joint Staff was completed – the building became a living and operating continuation of the nation's main art museum. 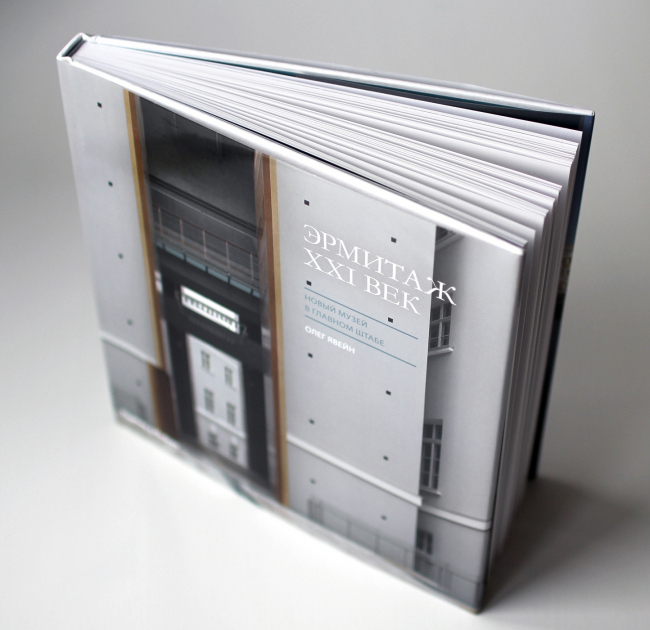 This book is a living proof of the fact that a great project can be written about in five or possibly even more totally different ways. The nucleus of the book consists of a richly illustrated detailed description of the concept written by the leader of the author team of the project, scientific adviser of "Studio 44", Professor Oleg Yavein. The description is prefaced by a few articles: a preface by the director of the museum Mikhail Piotrovsky and a short essay by Aaron Betsky. These two are followed by a detailed, emotional, and philosophical text by Dmitry Shvidkovsky and Julia Revzina – dedicated both to the history of the building and the project of its reconstruction, it treats Karl Rossi’s Joint Staff as the "triumphant finale" of the town-planning history of Saint Petersburg, uniting the plastic embodiment of the idea of Russia as the Third Rome together with the triumphant memory about its victory over Napoleon.

The poetic essay is offset by the rational analytical article by the Dutch critic Hans Ibelings: for him, the Russian soft spot for empire style after the Napoleon war is a paradox because "...the classic style of the Joint Staff is a sort of dedication to the very empire, in the victory over which the Russians take so much pride"

Meanwhile, one of the most exciting parts of the book is comparing the implemented project by Oleg and Nikita Yavein to the proposal by Rem Koolhaas who, in spite of the fact that ОМА yielded to "Studio 44" in the tender of 2002, nevertheless continued working over this project for some time in the capacity of academic advisor of "Hermitage-Guggenheim" foundation - the book has in it Rem Koolhaas' speech of 2004 with a brief description of the project and his proposals to his Russian colleagues. Mikhail Piotrovsky calls the "dialogue with the alternative proposals by Rem Koolhaas particularly interesting - with which he really leaves us intrigued.

On the other hand, Dmitry Shvidkovsky and Julia Revzina view the OMA proposal as the typical for the modern mainstream of museum reconstructions where the new is deliberately set against the old by contrast. And as for the work done by "Studio 44", the authors of the essay view it as totally different and even claim to having invented "the third path" that is equally alien to the ostentatiously "modern" style and to the retro-stylization, at the same capable of leaning "...on the wisdom of the ancient so as to push the limits of the modern, and go beyond the pale of its stereotypes" - seriously, one could hardly think of a better praise for a work of architecture.

Hans Ibelings supports the same idea saying that the architects "demonstrated their ability to go straight to the essence of the building <…> tried to understand what the eastern wing of the Joint Staff was all about and express what it wanted to become if it possessed <…> free will. Hans Ibelings names a few similar, in his opinion, projects of museum transformation (this list includes, among other things, reconstruction of the Tate by Caruso St.John architects) - but states at the same time that “in comparison with the indicated works "Studio 44" occupies a less humble position" - the critic attributes this to the spirit of constructivism inherited by Oleg and Nikita from their father Igor Yavein. Still, Shvidkovsky/Revzina also refer to their family history subtly observing an analogy of a different kind - the deep soul connection of Leningrad avant-garde with the "times long gone".

Back to the comparison with Rem Koolhaas proposal, though! Both projects proceed from the properties of the historical buildings but the OMA proposal treats the museum as a "stunning mosaic" of spaces, some kind of "anti-hierarchical" labyrinths built around the general entrance. "Studio 44", on the other hand, found in the Joint Staff the solemn axis, subjected the museum space to it, offsetting the absolute power of the centerpiece with a multitude of entrances on the level of the first floor. Both projects are quite "well-read" in the architecture of Russia but they find opposite things in it, one - the chaotic labyrinth, the other - the hierarchy and regularity (although, probably, as a result of OMA consultations, both themes were ultimately superimposed on one another, the enfilade becoming the background layer, so the article by Oleg Yavein is entitled "Between a Labyrinth and an Enfilade", and its last chapter - "Space Mosaic" - pays homage to the idea proposed by Koolhaas).

It is necessary to remember at this point that, in the traditional history-of-arts sense, the architecture of the Joint Staff is indeed dual and can even be perceived as the reflection of the character of the Russian Empire of the XIX century: the grand facade on the outside and the dull red-tape bureaucratic substance inside (incidentally, the ministry campus included not only the offices but also the flats of the government employees; besides it was built by different contractors, hence the odd discrepancies here and there). One could think that Rem Koolhaas enhanced the second peculiarity inherent to the inside structure of the building carrying out to the public eye something that classicism preferred to stow away in the closet: marginal properties of the spaces - and endowed the lining of the empire image with a highly contemporary meaning.

Oleg Yavein denies the above-mentioned treatment of the architecture of the building of the Joint Staff. He is positive that there is no controversy between its facades and the inside structure and that the circumference of the Palace Square is not the author's whim but a continuation of the context, and even the proverbial sharp angle is not a forced measure but a thought-out technique. Besides, "Rossi initially drew on the plan unbroken lines of the enfilades - writes Oleg Yavein - and on the course of work the architects realized that the existing premises fall into an enfilade of their own accord along the perimeter of the building. And, if we look at the plan done by Rem Koolhaas, we will see that he deliberately ruins this route breaking the line of the route in zigzags, and sometimes even stopping it with dead-end appendixes. 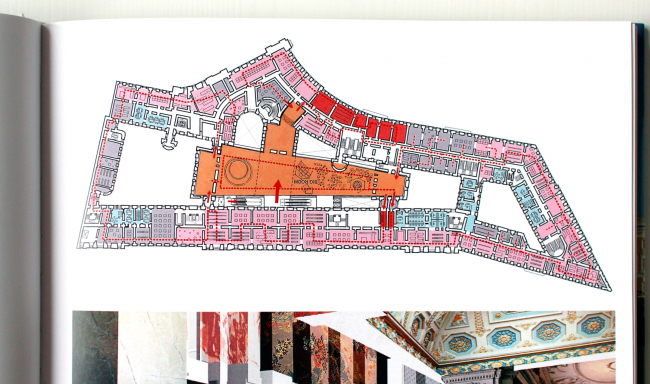 The main subject of the project done by "Studio 44", however, became the other (major) enfilade - this enfilade, as the nucleus of their "new regularity" the architects were also able to read from the architecture of the ministry building. It turned out that the five courtyards grow in size consequently smaller from south to north, in the direction of the Winter Palace - nobody had ever noticed this peculiarity before - forming a giant perspective structure whose axis is pointed exactly at the spire of the Peter-and-Paul Fortress. The architects blocked the yards, raised their floors up to the level of the "representative" second floor on the platforms whose section views look like the Saint-Petersburg's drawing bridges. The links between the buildings and the yards were reconstructed and given the regal - almost of the temple kind, and maybe even Roman-style - doors. In the beginning and in the end of the structure, the architects placed the regal amphitheater stairways. The result looks like Forum Romanum. And generally - the project that has been executed in the imperial style is still on the side of Catherine the Great's enlightenment ideal rather than the "military parade" ideal of Nicolas the Emperor, and thus the building also kind of breaks in two, although still within the confines of the overall empire paradigm. The museum function is really better accommodated by the enlightenment style rather than by the military Napoleon Empire.

Options of the doors design. The final one was not possible to implement and it was subsituted by a more laconic version // Oleg Yavein. Hermitage XXI century. New Museum in the Joint Staff. London: Thames & Hudson Ltd., 2014

The multitude of meanings hidden inside the project give you the aftertaste of the late XVIII century - what is different here is the fact that the enlightenment people were more into natural science, and the authors of the museum are more into history, first of all, the history of this building and of this city. The main axis that the architects found, for example, came back as a glass trail that has been drawn on the floor and the enfilade's stairways - and looks like an hourglass in a baroque temple or maybe the strokes of the Foucault Pendulum on the floor of the St.Isaac's that get us wondering how this space was inscribed into the structure of the universe in general or into this city with its twisted logic in particular. Besides, the authors draw parallels between the modern automation of transformer museum halls (that controls the exposition of modern art and the giant doors that are difficult to open by hand) - and the mechanisms of Feltin's New Hermitage (that chanced to lie in the path of the enfilade's axis) and its recently-restored "hanging garden" on the roof: initially, it was planned to plant trees inside the covered yards, thus also making a hanging garden of sorts, but the idea so far is still on paper. The hanging bridges quite unexpectedly put one in the mind of Saint Petersburg's passages, adding to the theme of Catherine's enlightened monarchy (that actually started the Hermitage collection) a tad of historic romanticism that was already relevant during Rossi times, although it did not affect him personally that much.

From the imagery standpoint, the project is closer of all to the almost perfect plastic embodiment of the abstract thought in the pre-war projects by Paris Academy's Boullée and Led - they were very much loved by the Russian (although more by Moscow) empire architecture - and by the architects of the 1980's...

As we can see, the book provokes diversity of thought, providing lots of things to ponder over: besides the sayings by various authors, the book demonstrates in detail the story of the authors' search for the solutions, honestly says what the architects were not able to achieve and, the other way around, lots of plans and photographs show just how much WAS achieved. The careful restoration of the grand interiors, arrays of lamps over the top-floor halls, and especially the attics under the vaults of the triumph arch - there are lots of details here that are really worthy of your attention. In conclusion, we will add that this seems to be the first work by the Russian architects published as a hardcover by a foreign publishing house in English and with the global reader in mind (the Russian version is considered to be the supplement to the English one).
Text by: Rem Koolhaas, Nikita Yavein, Julia Tarabarina
Translated by Anton Mizonov