“Panakom” studio suggests a harmonious legend for their new project in Nikolskaya Sloboda – they gave the features of the four elements to the four constructions. There have shaped an ornamentally developed world image, surprisingly fine in its static state. The architects are back to common for them austere style, with concrete ornaments and ornamental cuts out.

The plain and clear scenario gave the architects idea of independent blocks: for the owners, the guests and for health. The architects, separating them, added another one – the entrance glass tower-atrium. The block with a swimming pool is the water element, the guest block with a cabinet and a separate entrance is the calm earth, the owners’ block, with a fireplace, to the fire. Instead of the common fourth element of wind, there appeared more inert “air” in the house, presented by that glass entrance.

Stone facing of all the volumes will cut into this glass parallelepiped so in the end there will be a small covered yard, which size and arrangement somehow resembles of an illustration on life in ancient Rome. Taking into the account that the central stairs is also for housekeeping staff in the living room, there is another to the second floor. So, the idea of the house owner to decorate walls with ancient fragments of architectural details does not seem odd – the space makes it possible and intrigues.

To avoid overheating of the space within glass and for more impressiveness of the atrium-“air”, the authors recommended to apply a geometrical ornament to the walls a la chain armor – there shaped somewhat bubbles. Though, the architects think that during further work they can be changed. But regardless the final ornamental image it will be applied to the all the functional blocks – air can get anywhere.

In the result it appeared on some windows, and also as concrete pergolas. Private zones were faced with them: windows of sanitary arrangements, the dining room and a part of balcony. “Spontaneity” of the other volumes will be expessed in facing: outside will be used one type of stone but with different texture – the “earth” will be, “water” will be smooth. Such variety of materials, referred to an element, will also be in interior design, which only appear on the stage of concept. So, the owners of the house will have their own complete world surrounded with a large garden, even the garage will be earthed into the hill. 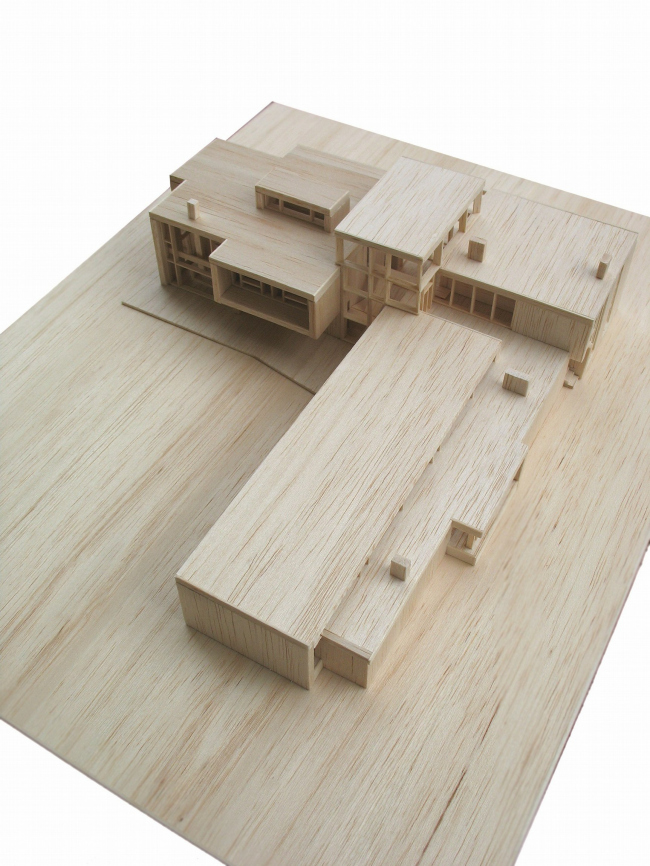