A Settlement on a Peninsula

Las-Vegas near Minsk or just a settlement on the bank of a water reservoir: that is the question. Arkhstroydesign is designing for Belorussia. 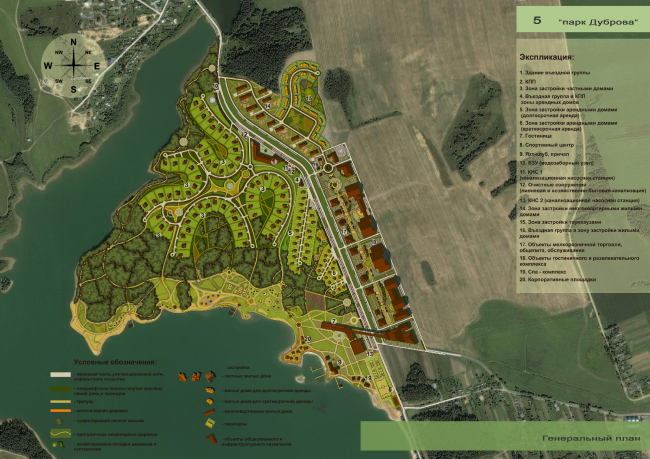 Such things happen in architecture quite often: the project has stopped on the stage of an idea, to be more precise – is simply “stuck” on the co-ordination stage. And somehow it does not seem strange – there were plenty of strange things about this project before the coordinating. A picturesque peninsula near Kudrischino village: a territory facing water with its fields and coppices. This quiet, virgin place seems to be far away from the whole civilization. But in fact it is a stone’s throw distance from the capital – only about 20 miles away. And the client does not express any wishes… You may even build a casino if you will – it is Belorussia after all.

The idea of creating a settlement here was suggested to Alexey Ivanov by Alexander Khomyakov – a friend, a colleague and a long-standing partner. He was the one who finally became the job captain having suggested a broader approach instead of the usual Arkhstroydesign planning layouts and leading away from straight lines to softer curves.

The authors had to make up, or rather – feel for the program themselves: analyzing, exploring, and proposing optimal zoning and functionality. It was clear right away that the permanent residence zone was to be separated from the zone of temporary accommodation – such as hotels and houses for rent. The only question was: which one – where? Private homes were to be placed in a calm, secluded area – which meant building them on the bank of the water reservoir. Housing for rent, which is smaller and would take up less territory, was to be placed over the road – next to the hotel complex.

Besides, the authors needed to plan enclosed and public spaces, avoiding solid fences; allocate a beach and a sports area, think of a leisure-recreational program – with restaurants, shops and casinos (aren’t the Belarusians lucky). Not to mention organizing the vehicle entrance, creating a convenient traffic diagram, arranging a sufficient amount of parking places, constructing all utility networks (the area is indeed virgin), building disposal works etc. And all this - in full congruence to the landscape and in harmony with the natural surroundings.

The result was to be an elite settlement on the peninsula. Closer to the reservoir in the south-western part – are the private houses. Following each other, their green lots build up fanciful groups reminding sea shells or snails. The borders of these “snails-shells” are lined with driveways leading to the round public grounds and a green park at the approaches to the water. According to the authors’ plan, the park is to be “broken” not only on the bank but inside the settlement as well: pierced by multiple foot-walks, bikeways and a long promenade. All the curves of the streets are no coincidence: they are drawn in this way specifically to open the most complete panoramas of the water and the forest. Everything ex testamento the worthy Englishman Ebenezer Howard, who once invented the Garden City: a perfect tranquil world of a city citizen living in the country. 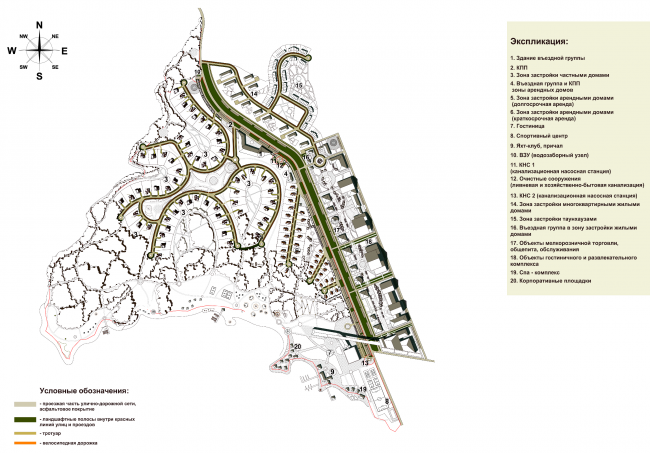 The settlement is clearly divided by a wide road into two unequal parts. This axis crosses the lot from south-east to north-west connecting the peninsula with the thoroughfare leading to Minsk. A line of parking-lots is placed on the periphery. The promenade pedestrian area is hidden in the shades of the trees. And if the snails-quarters with their cozy houses are on the one side of the boulevard the structure of the other side is firmer. The rigid geometrical network holds all amenities: small shops, street cafes and restaurants. One of entertainment complex buildings is joined with a hotel block situated right in the beach area where the authors also plan to build a big spa-complex. There are also accommodation units and long lines of town-houses in the northern part of this “infrastructural” district.

As for the architecture of the buildings, the client decided to base it on a project already existing in the authors’ assets – for the Courchevel.ru settlement near Sorochany on Dmitrovskoye Highway where all the buildings remind Alpine chalets. It is a sort of “ab exemplum” building. The authors think that it is a little bit wild – seeing Alpine chalets amid Belarusian fields.

The astern part of the settlement emerged as a possible further extension of the development by building a full-fledged game space. One must admit – there is plenty room for extension: just across the road are endless fields. But only a thin line across the road is drafted for now. Further planning makes no sense yet. The author explains: “One part is closed-loop despite of its picturesqueness – it has no ways of developing even though it seems so open. Whereas the firmly structured orthogonal part is completely free and holds a great potential. The question is: will there be new Las-Vegas in Dubrova Park?”

This question hangs in air for now. It is unclear yet, whether the project will be extended.