The contest project of an apart-hotel on the shore of the Adriatic Sea, developed by Totan Kuzembaev, has been awarded the Special Jury Prize

The nine-story apart-hotel of fifty apartments will be built in the central area of one of 's most visited tourist cities - the city of . The construction site is located on the Mediterranska Street, not far away from the old town and the sea port, so organizing an international contest made perfect sense here due to the high-profile location, vicinity of architectural monuments, and the obvious necessity of competing with the already existing hotels that are more than quite numerous here. The tender was of the closed kind, and the team of Totan Kuzembaev was 's only architectural bureau to get the invitation to participate in it.

As the architect himself shares, the contest specifications were put in this nutshell: the contestants were to come up with proposals of a building that would look impressive but not garish and that would precisely fit the environment of this seaside town. The height of the future building was limited to nine floors, two of which were to perform the commercial functions. The fact that the layout of the building would be of a rectangular shape, was clear to the architects from the very start - standing in the beginning of the Mediterranska Street, it would "head" a whole array of typical "cubes", three floors of each overhanging above the shops and cafes in a cantilever. Actually it was these "cubes" that not only defined the width of the hotel facade that faces the sea, but also became the starting point in the development of its architectural image.

His task here Totan Kuzembaev defined as the search for a reasonable balance between the creation of a self-sufficient architectural theme and paying homage to the building's surroundings. Proceeding from using a very simple and laconic volume, he looked to make it "grow" in such a way that the initial geometry would still be discernible even at the pedestrian level, thus creating a feeling of continuity. This is why the two bottom floors of the building that house the shops and stores get an expressly laconic design, and are turned in a cantilever to their immediate neighbors. In other words, in the case of this hotel, the residential premises also overhang above the public functions, even though, due to its tallness, this cantilever is not articulated so vividly - the architect but defines its presence. The latter is done with the construction materials as well: while the residential floors and the facade that face the old town are dressed by Totan Kuzembaev into his favorite wood, the "cubes" are looking at a fully-glazed parallelepiped that looks as if it was "wedged" under the P-shaped building at the last moment and is now supporting the terminal laconism of the neighboring buildings with its facets. And, even though Totan Kuzembaev's design presupposes the abundant use of wood almost by definition, the architect prefers to give reasons for his choice in this case. The thing is not so much that he likes this material and not so much that he is a virtuoso expert in wood - for Budva wood was chosen, in the fist place, in order to create, in the apart-hotel, a comfortable microclimate in the hot summertime. Besides, the architect wanted to make the "intrusion" into the that has almost no high-rise accents on it, as "unobtrusive" (no pun intended) as possible - if not at the expense of the silhouette, then with the help of a maximally friendly material. It should be noted here that in one of the versions of the project the silhouette also comes into play: the authors propose to flank the flat roof of the apart-hotel with trees. The seaside architecture, doomed to eternal search for the compromise between the grand-scale glazings for the sake of beautiful views and protecting this very glazing from the hot sunshine, inspired Totan Kuzembaev to make a bold experiment. Choosing between the blinds and the shutters, the architect decided to try and cross these two elements: the function of the upper protective "casing" of the fully glazed facade is performed by a sophisticated system of moving wooden troughs with soil and green planting. They have a varying length and they are strung on a few pivoting axles in such a way that each of the windows and each of the terraces gets the "shutters" of their own. They all have opening amplitudes of their own as well which can be controlled both from the master switch and from its apartment. According to the authors of the project, the plants in the troughs will not only add to the beauty of the seaside view but also will help keep the cool air, and absorb CO2 together with the rainfall. This cross between the blinds and the shutters also plays an important part in creating the architectural image of the building. When they are shut the hotel sports a rather minimalist look: the facades are only decorated with these broad wooden stitches between which the greens are barely discernible. However, once at least one apartment opens its windows, the facade goes into an immediate transformation bristling with wooden needles. The overall number of possible combinations of open and close "lamellae" is even hard to count - which endows this initially laconic volume with a lively and unpredictable character. Actually, this is plainly seen from the visualizations provided by the architectural studio: at times there is a wave running over the surface of the facade, at times the facade looks like a mop of hair, and at times from a distance it looks like a sophisticated anthill.

The fact that this solution was not exactly the most inexpensive one possible prevented Totan Kuzembaev from winning the international contest but the jury unilaterally mentioned this project for its originality, recognizing that the solution proposed by the Russian architects helps create a memorable architectural image that also fully answers its intended functions. 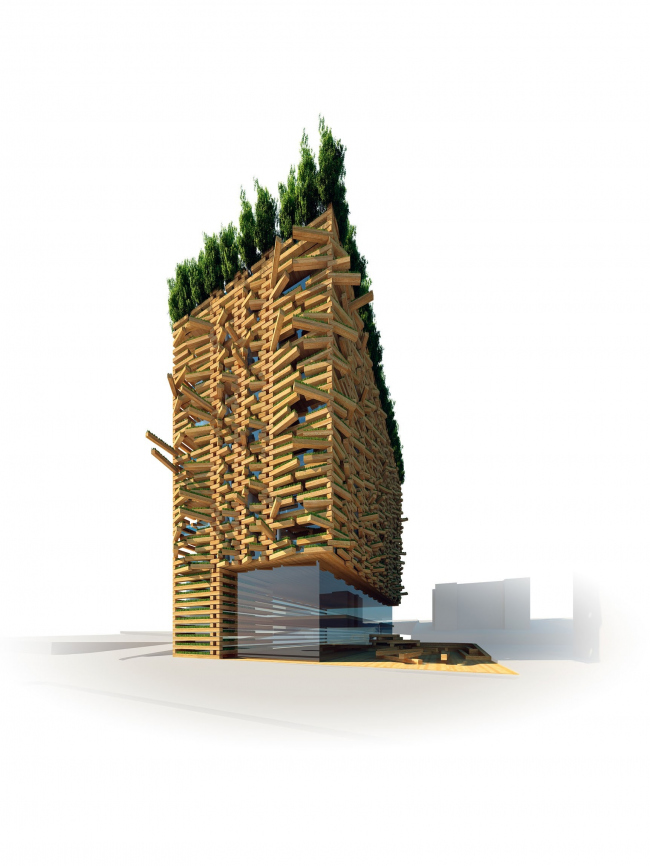 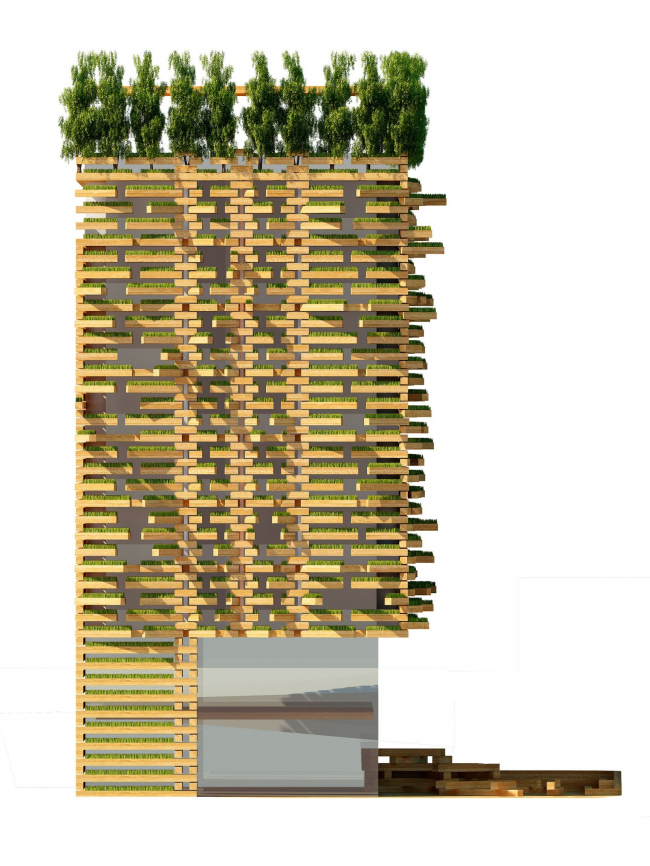 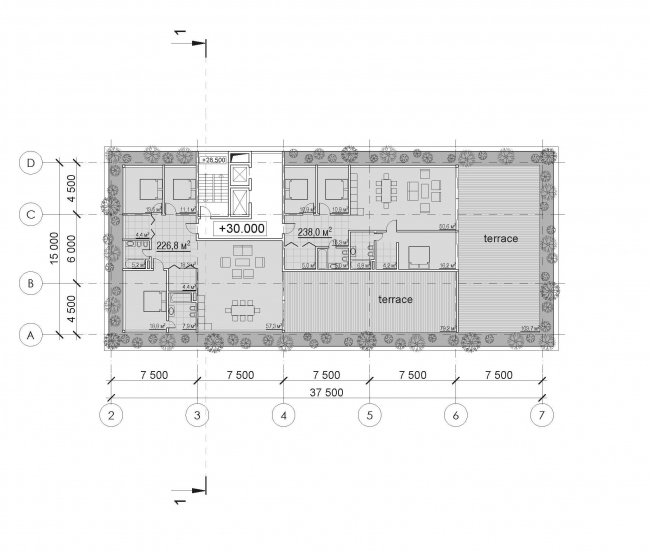