Having obtained the comission to design a log house, Roman Leonidov built a cottage reconsidering the traditional image of “izba” (a traditional Russian countryside log house) in the mainstream of contemporary ideas about the layout and development of suburban housing.

The customer clearly defined his wishes for the future house: it must be a log house, but a modern one. By “modern” the client meant not only the architectural style of the building but the layout as well. In particular, the center of the interior was to be a bright multifunctional room, and as for the outside, the house was to be supplemented with a garage, wide terraces and a pool. “I found this proposition interesting because the client was sincerely charmed by the log house style, but his demands to the future cottage were absolutely incompatible with the izba-type house, – Roman Leonidov shares – To make these wishes come true we had to work out an unusual structural scheme and approach the issue of the layout very thoroughly”.

On the plan the house is shown as a sophisticated figure – it is a letter “S” tipped on its side that is made up of rectangular rooms of different sizes and functions. The center of the first floor, just as the customer wanted, is a huge living room combined with the dining room, which can be accessed through the office, guest room, sauna, as well as the stairs leading to the second floor. The second floor is reserved for private rooms of the owners - the bedroom, the dressing room, the nursery, and the billiard room and library. A small “tail” of the garage is transversely fixed to the long beam of the letter «S», oriented along the east-west axis, and combines two entrance areas. The porch and the “appendix” of the garage are directed to the north, while most of the interior rooms are oriented to the south side, where the architects attach several large terraces, and insert an open-air pool between them.

It is interesting that not only the rooms of the first floor get terraces, but the second floor as well – wide balconies supported by wooden square poles. These very laconic constructions are particularly in striking contrast with the large-diameter rounded logs, which make up the walls of the house itself. Perhaps, they would look very alien to each other if it were not for the stained-glass windows that give maximum daylight and sun to the house. Paned surfaces are so broad that they visually supersede the massive log walls – one glance at the facades of the house is enough to see that the stacked logs don’t play the main constructive role. However, this is not a decoration either – it’s just the way it came out, as Roman Leonidov says, simply the framework became just a part of the design concept. In fact, the architect took a traditional izba and expanded it to the size that allows to easily accomodate all the functions necessary to the customer. The walls were pulled out with a framework of vertical and horizontal beams. Made of timber, they form a lattice whose cells the architect fills with stained glass, or, again, wood. As a result, the facade made up of one material shows absolutely different textures – massive convex logs with overhanging ends suddenly give place to a flat surface of the timber that Leonidov camouflages with fine rack. The space under the roof is decorated with this very vertical hatching – this visually separates the traditional gable roof from the traditional timbered wall and thereby enhances the feeling that one gets at the very beginning: the “izba” which became the prototype for the house was split into separate parts that the architect uses and designs more than freely. In support of this Leonidov builds a separate roof for that part of the house, where the bedrooms and the attic are: the advanced overhanging length make up a reliable protection from the midday sun for the terrace, and the high ridge of the roof gives archetypical appearance to this thoroughly modern house.

And if the south side is made fully transparent, then northwards, to the main entrance and the nearby road, the architect builds up a shield-facade. On the one hand, Leonidov did not want to make this part of the house too “buttoned-up”, but on the other hand, he had to secure the main area of the house from the eyes of the passers’-by. The solution was a nontrivial one: just as the architect expands the structure of the five-walled house, he draws apart parts of logs adding transparent elements instead of them. These paned fragments of different width turn the wall into an intricate puzzle which gives glimpses of greenery around the house and at night the lights of the neighboring houses can be seen without violating its privacy.

Deliberately avoiding stylization, Roman Leonidov counted on the succession of the architectural elements characteristic of rural buildings of the past, and, following the preferences of the customer, functional program and the desire to join the exterior and the interior, built a house, in which the features of traditional log houses are naturally interwoven with the artistic and constructional techniques of modern architecture. 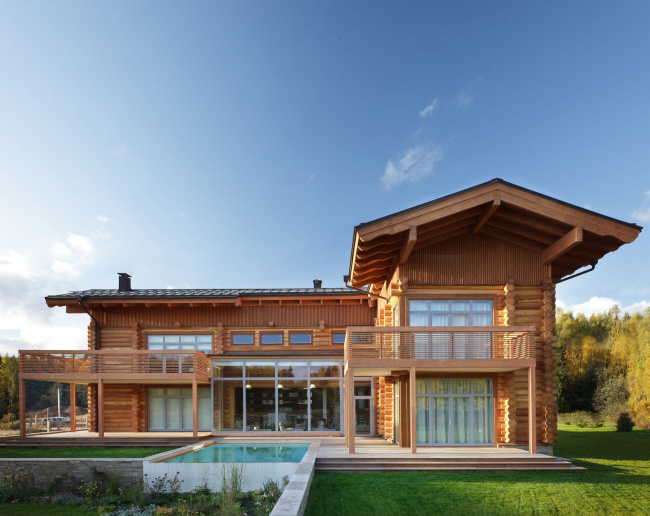 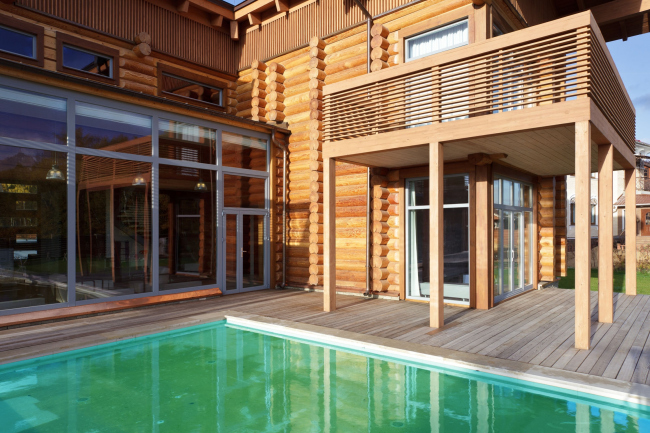 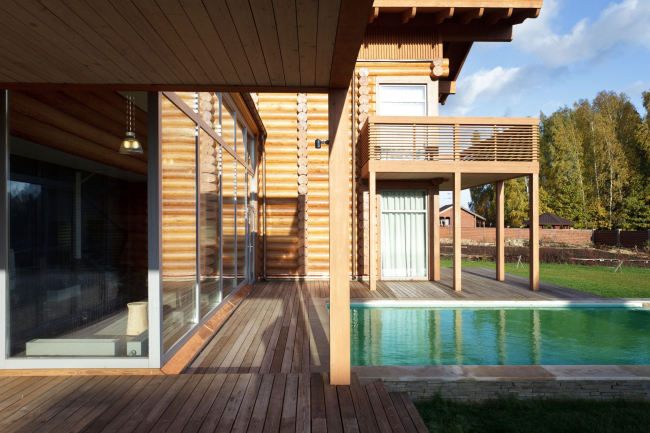 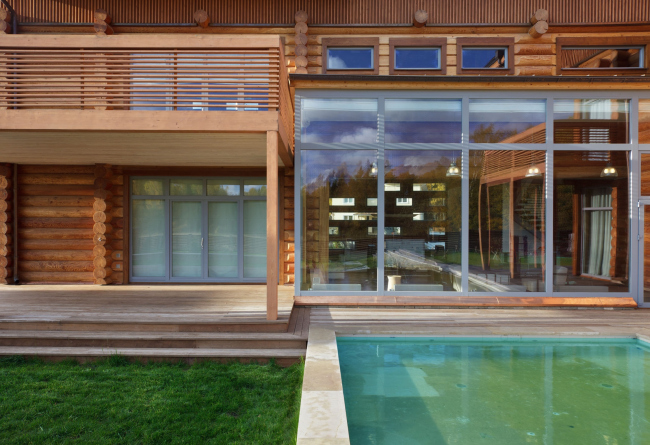 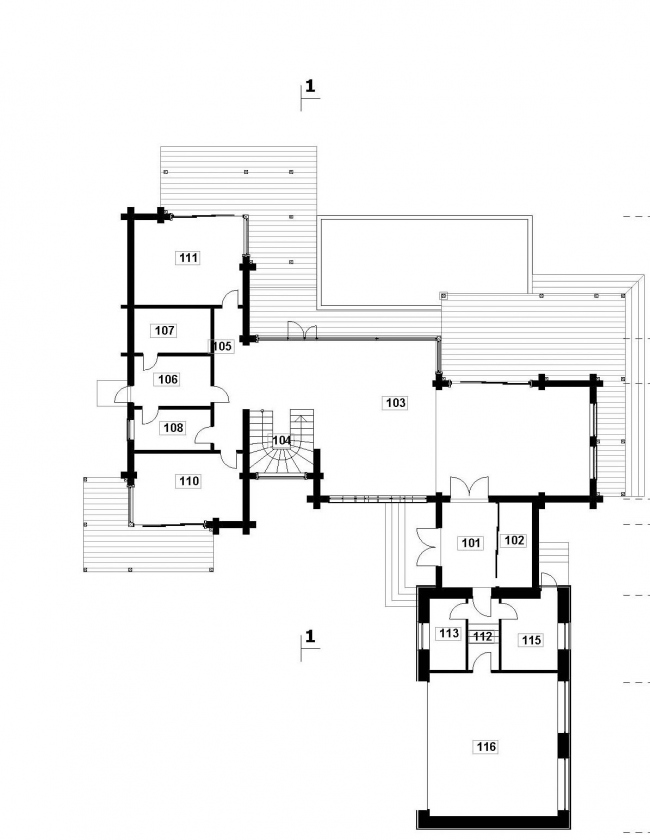 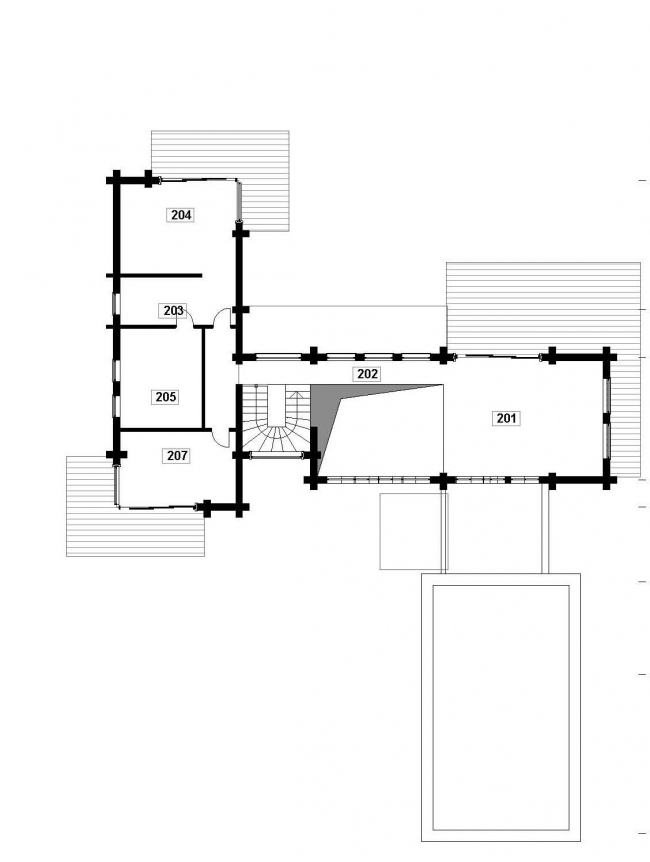