A Block White as Snow. On the Embankment.

The office complex "Aquamarine" is built on Ozerkovskaya Embankment in the place of the former industrial area; in fact, the architects of "SPEECH Choban&Kuznetsov" came up with a whole new understanding of the town-planning structure of this place.

Initially, for the construction of the complex consisting of a few buildings with offices and apartments, there were allotted two neighboring land sites stretched perpendicular to Ozerkovskaya embankment. Appreciating the magnitude of the future construction and its location in the capital's very center, the architects set before them a task not to limit themselves to designing an ordinary mixed-use complex but come up with a new typological unit - "an embankment complex" - that seems to be in dire need of. According to the idea of "SPEECH Choban&Kuznetsov", the new building was to sport a high-profile facade that would be clearly viewed from the water area, and at the same time create, in the place of the former industrial zone, the cozy city environment with little streets and cute courtyards. Proceeding from this, the town-planning concept was developed: the central axis of the composition was to be the pedestrian street, picturesquely arched on the layout and ending at the spot where it meets the embankment. And even though later on the north-west part was excluded from the program, the architects still were able to keep this compositional solution. Ultimately, the construction of the complex was done on the territory with an area of , that housed all the four buildings separated by a few little in-block streets. It was the central pedestrian area that eventually formed the master plan - arching in a tight arc, it connected the embankment to the square that was formed by the crossings of two inside driveways. The width of this street varies smoothly: as it approaches the embankment it gets wider, welcoming the guests to the territory of the complex, then it narrows again to cross a short little street that "pierces" from the largest office building and is accentuated by its portals, and eventually brings the visitor to the already-mentioned square. Still, the striking arc of the in-block street is also determined by the very configuration of the largest building. In order to move the office facade away from the neighboring residential house, the architects curved it in an arc, thus increasing the gap between the buildings by fifteen meters. The curvilinear shape and the increased distance between the buildings gave them more "privacy" and visual independence. The fist floors facing the new street are given to shops, cafes, and restaurants, and are open to the general public. The planning project specially provides for making small premises here - under - which must be the basis for saturating the block with various types of infrastructure. The roofs are also going to be made as accessible as possible: the authors of the project moved all the technical and maintenance equipment to the top level, thus freeing the roof area to the maximum. What is interesting is the fact that these terraces appeared as a response to the town-planning situation: the height of the buildings rises gradually, from five to eleven floors, providing limited connection with the surrounding buildings and corresponding to the demands of the landscape and visual analysis. Three "Aquamarine" buildings are occupied by offices, and the fourth (and the smallest) one is given away for apartments. Different in sizes and shapes, the buildings are nevertheless configured similar from the architectural standpoint - on top of the glass dressing of the facade, a snow-white grid is placed, whose horizontals are the intermediate floors, and whose verticals are doubled semi-columns that could remind us of Ivan Fomin "proletarian classics" - but then again, the authors admit to drawing inspiration from his architecture. However, while in the 1930's the concrete columns, devoid of their capitals would stretch up for floors on end, now they have become part of metal casing of the buildings, rather than the concrete one. Particularly striking are the rounded corners where the glistening bent glass, framed with the verticals of double moldings, is crowned with the sharp triangles of the cornice slabs. The active verticals enrich the plastics, set the rhythm and make the perspective of the boulevard more dramatic.

It is only the largest, fourth, building, whose faced plastics is a little bit different: with semi-columns the building would have looked too massive, so the architects came up with a different type of verticals for it, these being the ribs coming out of the surface of the faced and reminding of the exploits of the post-war modernism. This solution is justified from the constructional standpoint as well: this building has curtain walls while in all the other buildings the walls are of the monolith type. The main entrance is accentuated by an imposing glass portal, through which one can see the lobby with an atrium and the "court of honor" turned to the residential house; above the windows of the first floor, there are glass transom windows in which billboards and other advertising units will be placed. The architects were very careful in selecting the materials for the facades: opting out of trying to imitate the stone surface in composite material, they looked for metal that would really look exactly like metal. The white color is meant to enhance the glitter and the lightness, as well as make the new complex contrast to the surrounding houses and stand out against the background of stucco and brick facades that prevail at the embankment. It was also just as important the optimum combination of metallic glitter to keep the building, as Sergey Choban put it, from "looking like a refrigerator". This purpose was ideally served by the composite panels Goldstar, lightweight, and beautifully glittering with subtle shades of color. The architects were choosing the glass just as carefully. At last they settled on the transparent glass with a gray tint. The rigorous rhythm of the verticals is especially prominent against its "mirror" background. The authors themselves jokingly call their creation "a full-scale model", and this definition explains both the apparent lightness of the complex and its ostentatious independence from its architectural context. Snow-white and modern, "Aquamarine" has not only become a self-sufficient piece of city architecture but also went a long way to organize its surroundings. 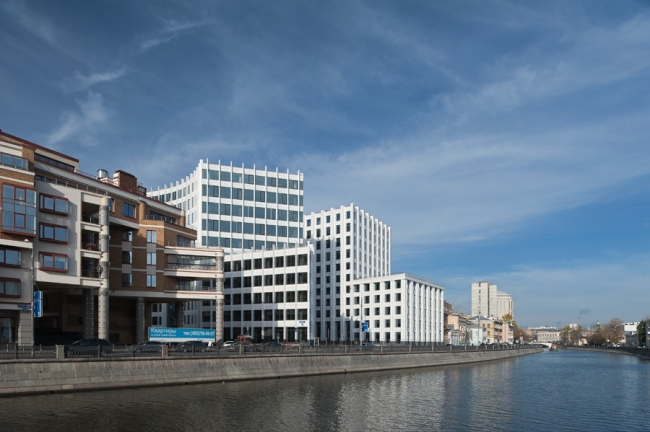 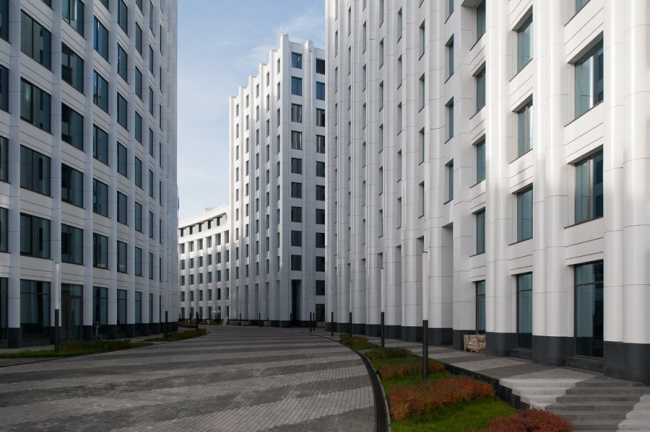 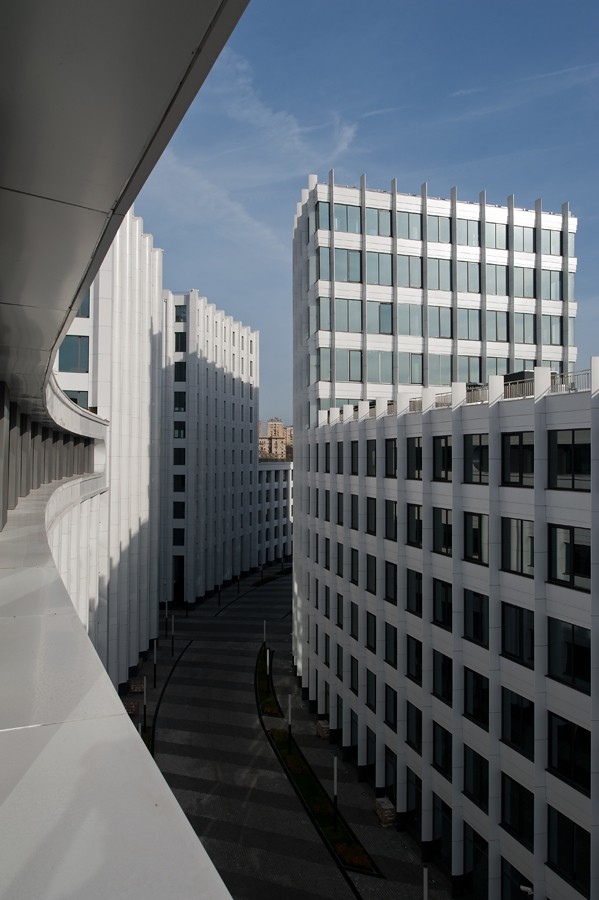 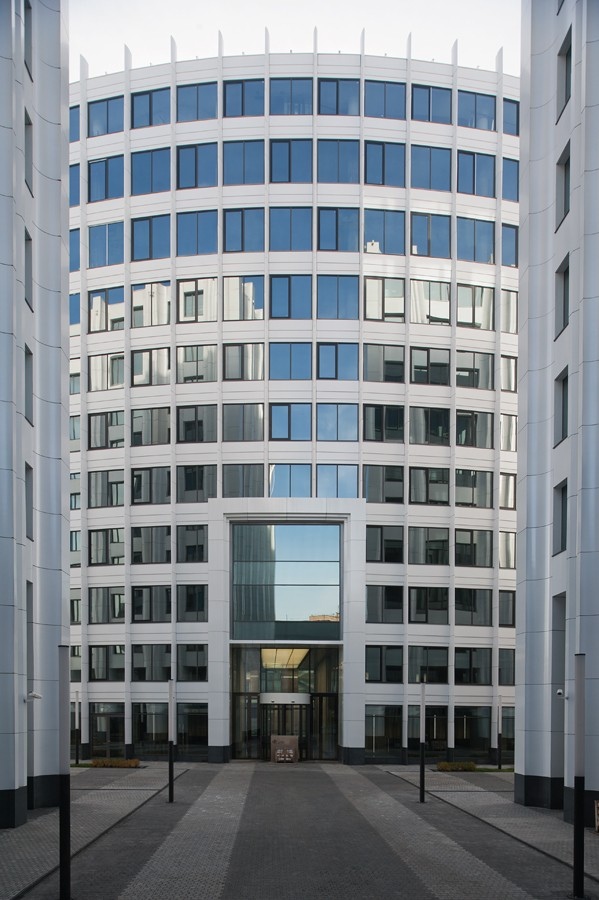 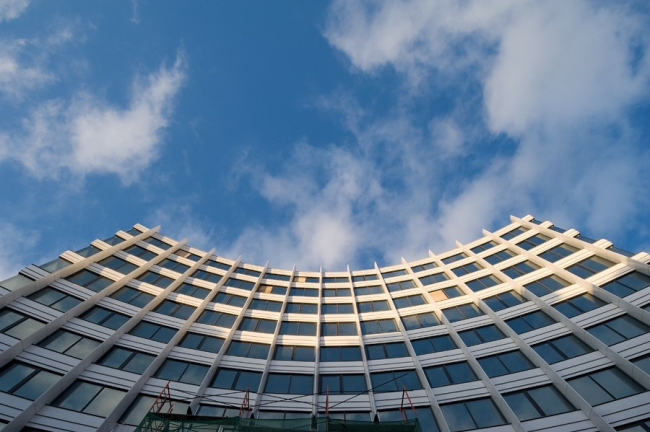