On Sadovoe Koltzo near the underground " Kurskaia " the construction of a building of tax inspection under Vladimir Plotkina's project comes to the end.

The building consists of three cases connected together: a "front", leaving on a line of Zemlianogo vala, and two volumes in a court yard - one, with a square well of a courtyard, is intended for the offices, the second is higher and little bit more compact in which actually tax inspection will be placed.

Its basis - rectangular blocks of cases, all which facades are largly lined by black-and-white strips of "tape" windows. The strips are added by a thin horizontal dotted line of small windows, a large line "sewing" among themselves white and black horizontals, removing sharpness of color contrast and once again emphasizing horizontals.
Atop of a striped basis asymmetrically in different places greater rectangulars are imposed: glass, white, flat, acting or, on the contrary, strongly profound. The sensation of mutual penetration of two structures - by one very strict - conditionally speaking, bases, and another, more dynamical, enriching and complicating initial geometry is created.

Similar combination - a basis of many works of Vladimir Plotkin. But in this case, apparently, on the party of a dynamical component besides actually author's art sense various objective circumstances have decided to act. Asymmetry is strengthened by that, under the ground on a site the main small river of German Large village Chernogriazka taken away in a pipe proceeds. The street facade which has appeared between 4-storeyed « former profitable » the house of XIX century and to two impressive "Stalin", answers their structure and proportions. The next Stalin building defines height, provokes occurrence glass attic which at Plotkin appears higher, on the whole three floors, but being removed from a plane facade a little, because of perspective reduction gets in the same rhythm and scale. Two glazed ledges become reflection of deep loggias on the Stalin house. On the other hand the facade "is adhered" to height of the four-storied house by means of the white rectangular cutting a small part of tape windows. According to the architect, here even « it is a lot of bows in the different parties ».

However inevitable "bows" in city centre at all do not spoil a building - opposite, interfering, they, apparently, cause some plastic indignation which for the lack of "circumstances", most likely, should be thought up in any case. Intrusion does not change the general stylistics - is crystal the precise, penetrated white-glass ease expiating greater sizes. Simply inside of the self-assured, perfected and quite completed art system there are whether some kind of « circles on water », whether - natural reaction on irritant, as if pearl-oyster in which sand has got. 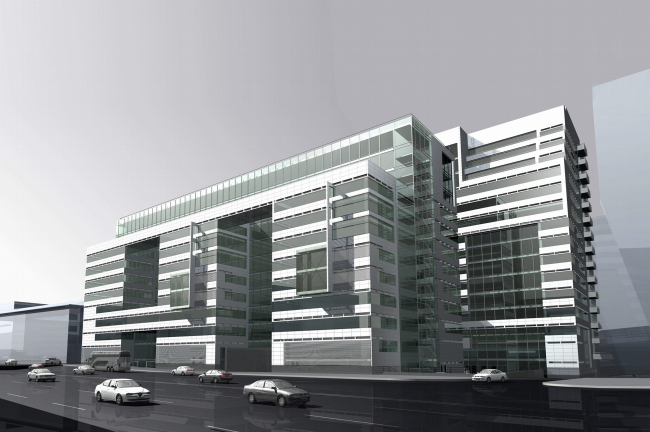 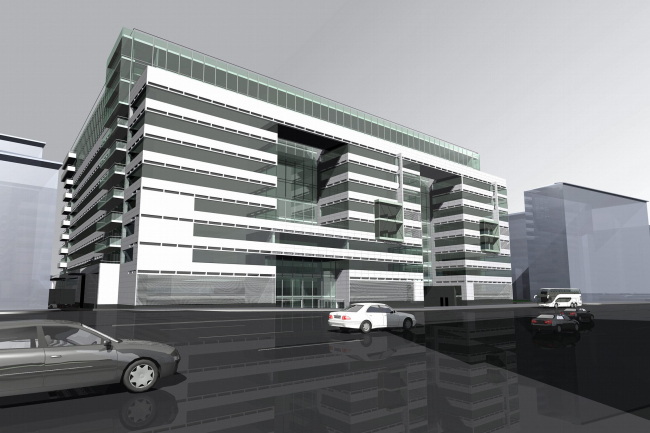