World behind a mirror

Very soon the construction of the retail center, designed by Vladimir Plotkin, will be finished on Kutuzovski prospect. The building promises to become a kind of attraction, and in the best way fits its purpose, even embodies it. Such a store does not need any additional build boards; it is such itself, better than most others

Minskaya Street crosses Kutusovski prospect right behind the Park Pobedy, separating the ‘culturized’ part of the Poklonnaya Gora from the West. From the park side, on a crossway there are three bronze soldiers looking somewhere to the abstract East. Now they have what to look at – diagonally from them the construction of a fine retail center is being finished, designed by Vladimir Plotkin.

The building of the retail center is installed in the core of road interchange, part of which will be constructed. One ‘long’ part views Kutuzovski prospect, the other – its future ‘double’, the parallel route, to relief traffic. Cars coming from all the directions, but it is convenient to drive up. Accordingly, the size and fronts are made for those driving by, being of a kind of shop window or an advertising build board.

The front façade, viewing the prospect, consists of alternating chequerwise show windows, evenly perforated with square bores in panels. There are light-emitting diodes in them are computer-controlled, this allows to create pictures of dot lights. The glasses of windows are slightly turned – the top for those coming from the city, the lower from those coming up to the center – this way they catch audience attention, trying to show more.

Everything is huge. Each rectangle on the façade takes the height of the two levels, 9 meters width, 7 meters height. On the last variant of design it has been planned to join show windows and light-emitting diodes into a single giant advertising poster: behind glass there will be prismatrons ‘tri-vision’, constructions of great triangular sticks, usually used for build boards; they allow to change 3 different images. Each show window will present a part of the huge, façade-size, ‘image’, and the perforated panels will complete the parts of image with lights. Or also the image of the mega-build board can be parted into different pieces, so the glass will take its usual look.

The idea of a show window develops differently in the next part of the façade. Here, surface of the wall is cut with the two transparent rectangular ‘shafts’, also huge, one floor thick (4 meters). The much-extended glass ‘aquariums’ instead of exotic fish will show either goods, being a kind of 3D shop windows, or visitors of internet-cafes, hovering in the space of megapolis on the 10 meters height..

The end face, viewing Poklonnaya Gora, is a part of the show, but for those who are inside, or rather the visitors of the restaurants, concentrated in this part of the center. There will grow a 25 meters large ‘nose’ on the level of the fourth floor – this will be an entrance canopy, and at the same time a balcony with the view to the park of Paklonnaya Gora, where people can take pictures, having on palm different well-known buildings.

The inner space is also full of emotions: its heart consists of the four atriums in the shape of round light ‘wells’, getting wider to the top, to grab more of daylight that is coming from the glass cones on the roof. The layers of storeys are nicely rounded, threading one on another, adding a bit of dynamic and complicating motion. Because the upper circles are wider, viewing from below the space of an atrium seems huger and roomier, from the top – the effect of foreshorten is more intense, and the height is visually greater. The number of atriums is not random, probably they are four because there are for times of year, and probably surroundings will be decorated differently, without realism, but making the strong impression of the four seasons in a single place. .

There are lots of retail centers in Moscow, with different architecture; but this style has became the only for public architecture, that is actively being developed, tasting different kinds of architecture. The exclusiveness of Vladimir Plotkin’s design is the architecture in the ‘Seasons’ is an active part of the process, a kind of half media. Probably, in this sense it is closer to ‘info space’ – not only due to computerized, but the walls, and what they want to show has become inseparable, and not always it is possible to find out where architecture creates an impression, and where information creates a building. 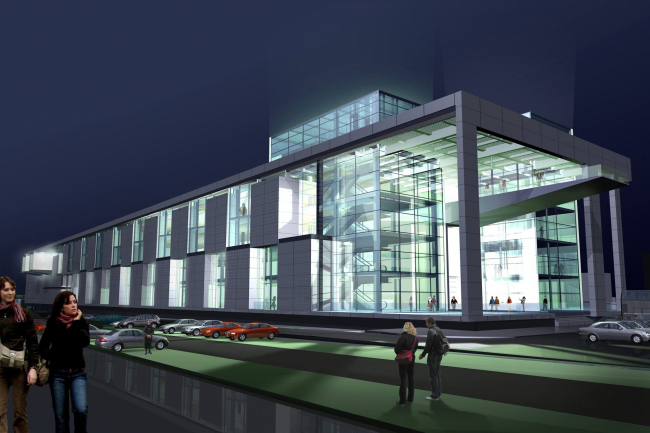 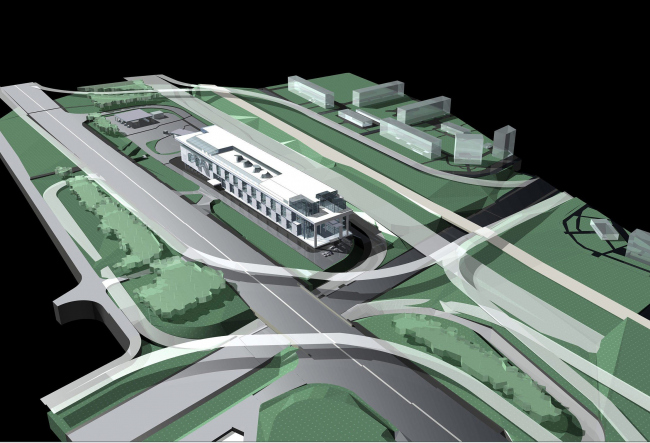 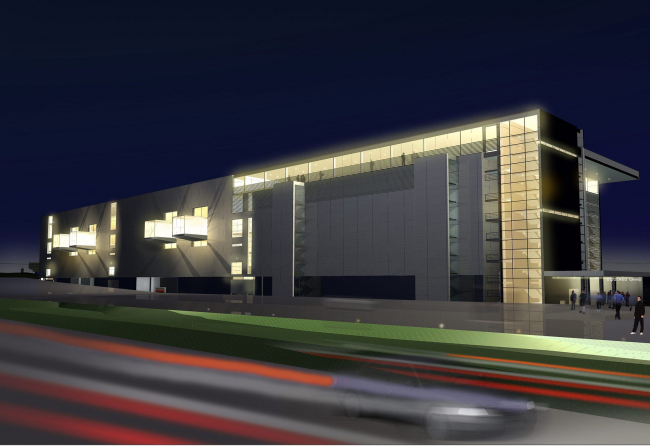