Sergey Skuratov: "I will defend my building ..."

The last three weeks “House on Mosfilmovskaya” has been in the center of attention of the city media. Only now architectural value of the project and even plentiful professional awards are not the subject of numerous articles. Moscow authorities unexpectedly recognized in the famous skyscraper an uncontrolled settlement and promised to build it down in about a quarter. We asked the architect Sergei Skuratov, who is the authors of the “House on Mosfilmovskaya” to comment on the situation.

Arhi.ru: Official statements of the authorities there is regularly featured the fact that the size of the object, in particular, its height, were no agreed with the developer before the construction was started. Is it true? S. Skuratov: As you know, it is impossible to start a building process without permission documentation in hands in Moscow. "House on Mosfilmovskaya" was authorized and only after there was started building ground development and work on foundation, and then, however, the project was changed. I’ll tell you why. First "DON-Story" wanted to construct two stages of a residential complex, to be exact two identical couples of buildings, consisting of a plate and a tower. There was given a site of need size, calculated and agreed technical and economic performance. But then the client gave up the idea of two stages in favor of one couple of buildings, but unique in its architecture and quality of realization. First the tower was designed twisted, but it would unavoidably involve extraordinary expenses on costs of construction materials, in particular, each façade panel would require producing by unique template. And when the Swedish Malmö there was opened a Turning Torso skyscraper by Santiago Calatrava, “DON- Story” totally gave up the idea of such a complex skyscraper, it would not only be too expensive, but could be seen as a borrowing. I designed a new tower, where replaced the original smooth curve with its geometrized imitation. This diagonal just required a different height and I told the client about it. Must add, the original height was dictated by the Center for landscape and visual analysis, their bewared the new complex would distort the view of Novodevichy Convent. Before the height was criticized by the Architectural Council, the experts fairly noted that in the view of Vorobievy Gory a 165 m would look like a stump, an incomplete skyscraper. Obviously the tower lacked gracefulness, and even geometry and façade plasticity are not enough. And only after I added 50 m more the composition showed in full effect. The new version totally appealed to the client and Alexander Kuzmin, the chief architect, said he would agree only after permission from UNESCO to construct a 200 m high skyscraper (the monastery is under its protection). As far as I know, "Don-Story" immediately sent all the project documents to Paris and UNESCO agreed. Actually I was sure about the future of the “House on Mosfilmovskaya” and just did my best to ensure it was built at the utmost quality. I must say the client always and totally responded sparing no expenses to create an absolutely unique complex. Various professional architectural awards, as well as in the field of commercial estate and development, received by the "House on Mosfilmovskaya” confirm it. Besides the project was successfully exhibited in Cannes and Venice, where it was highly praised, I had no doubt the new skyscraper height (213 meters) raised no questions. Arhi.ru: Why there are 22 floors for demolishing? Did the authorities take the agreed 165m from 213m? S. Skuratov: Frankly, I have no idea. Anyway the difference no more than 12 floors. if we are talking about the difference is these figures, it is not more than 12 floors. The irony of the situation is that I have not seen any papers. In fact, the chief project architect is denied from the conflict settlement, it is only between the authorities and the client. However, this is common for "Don Story", this company always takes up all such issues. Arhi.ru: Will the architecture and structural layout of the building suffer a lot from the partial demolishing? S. Skuratov: First it will concern the structure of the building. The thing each part of the residential complex (the tower, the “plate” and a low-rise volume between them) has its own foundation and if any of them will be overloaded or undercharged it "pulls" a neighbor. After the completion the building won’t take its position and the neighbor objects will face deformations. Proportions and coloring will considerably distort. After all, the main idea for the façade is a gradient, it is a gradual blend from dark to white, and if the white top will be cut the tower will be irregularly and ridiculously colored. Architecture of this height dominant is elaborately considered - I wanted to make an uncommon skyscraper top without heavy final tectonic touch and after long researches hopefully I succeeded. Mostly it is achieved by the white color of the top and large windows with complex configuration turned toward the plate and resonate with its façade. Demolishing will worsen the situation, in the part of the famous panorama there were no significant marks, and it seemed unfinished.
Text by: Sergey Skuratov, Anna Martovitskaya 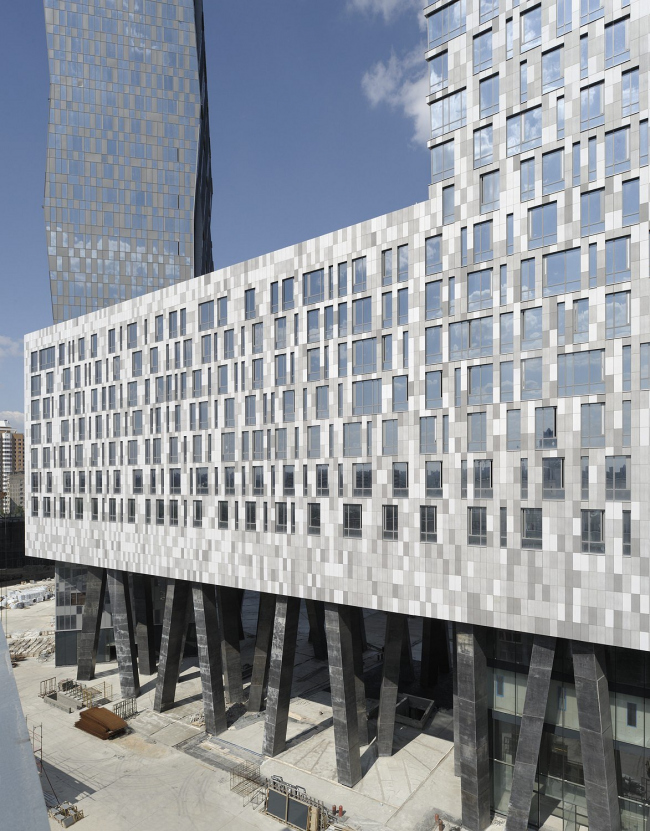 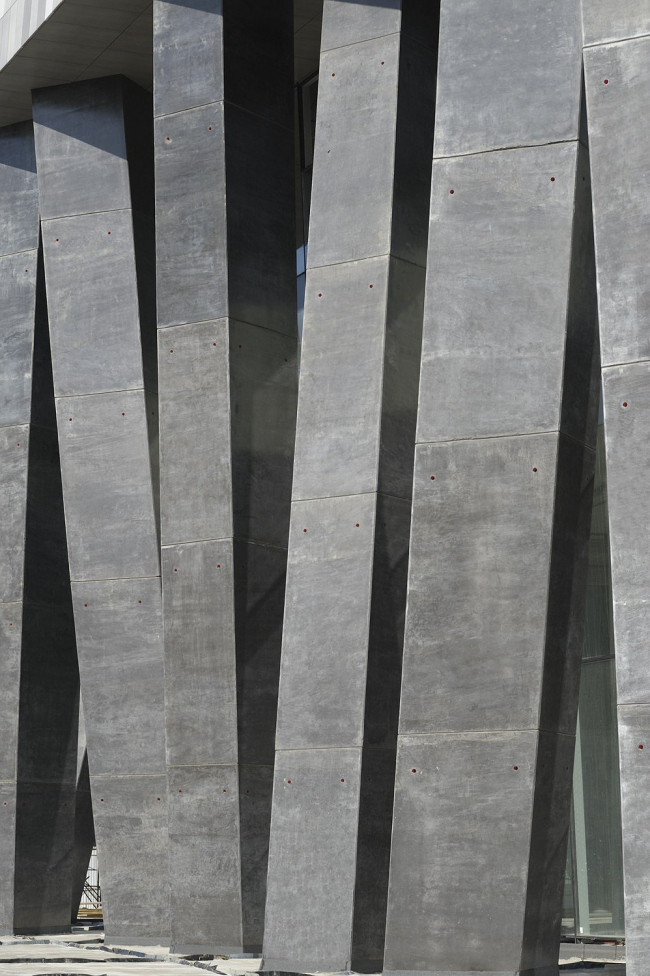