Window to the Europe

The sea terminal is intended for the passengers arriving to the city by Baltic sea. From water it will be similar to one big window rather extended across. Probably, this is the window to Europe. Finally it will be embodied and it will be possible to touch it. 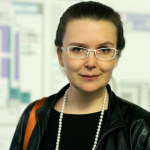 The form of the basic part of a building, lifted above a coastal line make us think about a huge window: its "sea" facade is entirely glassed, it is enough pervious for a sight and is led round by a massive framework - in the afternoon it is supposed to be dark blue, at night - a golden-yellow luminescence will draw the attention of the travelers. The laconic parallelepiped of the sea station building becomes a framework-view-finder through which the gests of  Peter’s capital will see the first panorama of the city; on the other hand, it frames a view on the sea for departing people.

It is ideal modern treatment of an old theme - the simple and transparent volume interferes in a panorama of quay no more, than it is necessary, leaving open space for light and air that does not mean excessive laconism - an intentionally-chaotic arrangement of light and decorative panels, a rough zigzag of an internal ladder - the whole set of unostentatious actual details and subtleties give out Vladimir Plotkin's handwriting, and also convince any person that a building entirely and completely belongs to XXI century.

The marina is planned to be construct on an artificial part of a land, the so-called alluvial territories which have prolonged the island Vasilevsky to the West. The project assumes to improve an infrastructure and the general atmosphere of this place which now have been built up, basically, with the apartment houses: the highway which will pass just on border of a continental and artificial land will be brought to the terminal. The recreational zone, and also a business centre, small hotel, shops are conceived. It appears that the way through « the window to Europe », will be quite comfortable, contrary to old aphorisms.

Overview
In this article, we are publishing eight projects of reconstructing postwar Art Nouveau buildings that have been implemented by Tchoban Voss Architekten and showcased in the AEDES gallery at the recent Re-Use exhibition. Parallel to that, we are meditating on the demonstrated approaches and the preservation of things that architectural legislation does not require to preserve.

Overview
T+T Architects have designed an office for a French IT company, where the employees in any point of the premises can discuss with their colleagues new ideas or even write them on the wall.