In St. Petersburg, on the 10th march, there was announced the winner of the international contest on the project of an unprecedentedly huge for our times of the “real” (survived the crisis) objects – the mixed-use complex European Embankment. The winner project considerably ahead from the rest was designed by the studios of Evgeny Gerasimov and Sergey Tchoban.

“European Embankment” in fact is a block city (or even a district) which will probably be built on the territory of former chemical industrial zone (RNC “Prikladnaya himiya” [Applied Chemistry]). Common subject for the past years and it is good to remove factories out of city and build houses and offices there. Location of the central figure is unique: centre of St.Petersburg, right between the Petropavlovaskaya fortress and Strelka. Generally speaking. More exactly, in the beginning of Malaya Neva, in front of Tuchkovy buyan and in view of Zimni palace. Dvortsovaya embankment is well seen from here, and the site fits the very picturesque view. It is remarkable that in such places of the country can be found industrial and similar facilities.

That is not the only unique feature of the project: territory of the future mixed-use complex is very large – 9,3ha. It is very large for centre in a historical city, especially in Petersburg. And the last, in our crisis time the investor claims they are going to have finished by 2016. So the “embankment” is the largest “real” project. Moreover, this contest may become the first of the international contests in St.Petersburg result of which will be realized. Anyway, investors are very determined now, but already think about economy.

Reasonable idea of the international contest did not come to the clients at once. In July, 2008 in Petersburg city council rejected the project developed by the studio of Jury Zemtsov and Michael Kondiain, in a few month, on November, 18th, the contest was opened. In the contest participated the three foreign architects: Mario Botta, Rafael Moneo, David Chipperfield, architects from Petersburg – Nikita Janvein, and the joint group Evgeny Gerasimov and Sergey Tchoban, which was announced the winner on the 10th of March. Evgeny Gerasimov and Sergey Tchoban are the authors of the two significant projects of “VTB”, the first was “Nevskaya ratusha” [Neva statehouse], contest on which the won in 2007. There is enough information about it. Now, let’s talk about the project-winner.

First, must notice, object of the contest was the town-planning concept. A specific genre of architectural design. Here, the contest task included already included specifications on functions, approximate quantity of square meters, i.e. development density, and such marketing details, as a maximum quantity of beautiful views (fortunately, the place is more than beneficial). The main part of the complex must be occupied by residential area, and the main cultural attraction is supposed to be the modern ballet theatre of Boris Eyfman. In the distant part of complex there are offices, and on the most advantageous place with the view to Neva and Dvortsovaya embankment there is a hotel. These were the requirements of the contest task and comply (corrected) with the characteristics considered on the architectural council in summer.

The structure of functions, development density and many other parameters were beyond architects work, only small variations. And they are not responsible for the final look of the complex. By competition the other architects will be involved in design of separate buildings (within the parameters set by authors of the concept). The contest on the project of the main part of the complex – theatre of modern ballet of Boris Eyfman – will be announced in the end of March. So, none of the contest projects including the winner can give the image of “Embankment” façade. Maybe just general features. The project of Gerasimov and Tchoban shoes the only one feature of the facades of the buildings fronting the embankment – there will be two risalits. So, it is too early to say about "Stalin" impression from the facades drawn by architects, in fact designed in the spirit of international art-deco of 1930.

What does the town-planning concept tell about? About plans and form of the buildings, or rather about the plastic of created city space. In the project of Evgeny Gerasimov and Sergey Tchoban there can be seen combination of the two approaches to the space.

First is absolutely traditional for Petersburg. It is enough to look take a look at the plan to make sure that most buildings in historical part of the city were constructed the same manner – surrounding their territories along the perimeter and most possibly taking the form of the site. So, together with common rectangular buildings, in the city appeared trapezoid, triangular, pentagonal, concave and curved ones, buildings with sharp corners and sometimes even five of them can be turned to a crossroad.

This classical for Petersburg theme was taken by the authors when they were figuring basic part of the building. Along the external outline all buildings are accurately sited along outline of territory. Inside they are “cut" by passages directions which are specified by the view points. The most beautiful of them is the street directed from Knyaz-Vladimir cathedral to the “Pushkinsky Dom” [Pushkin house] on Vasilevsky island. The rest "look" from within the block to Malaya Neva. The two streets are parallel, speaking at the regularity of the plan, and the two are laid at the right angle. But plans of the buildings are different – triangle, trapezoid, concave wall, curved wall. So, the inner yards are different as well and this is the salt of the project: slight differences of the buildings and the yards, defining their individuality. Everything is to a common standard, but various. Apparently, future participation of different architects in design of separate buildings this variability will be just intensified, but also will get the quality of "authenticity" – imitation of variety made by one author is different from the real cooperation of architects designing the neighboring buildings.

This part of the lay-out is most conceptual, it is necessary for creating a “city context” similar to surrounding. The general idea (building around the palace) and a sign of variety inspire it. By the way, the idea of “house around a yard” which brings idea of development with a single façade (common for Petersburg as well) is one of the main themes of the contest. It was used by the four participants of the five (all, except for Nikita Javein, who designed the plan of buildings extended to the river in the form of the "fingers", presented earlier by Zemtsov). Well, only Gerasimov and Tchoban designed a passage between the Pushkin house and the church, and only they combined traditional character of thebuildings and variety.
But the buildings are constructed on perimeter of the yard, are too closed. To overcome the problem, Gerasimov and Tchoban cut buildings by a number of methods, forming foot paths deep within the city block along Malaya Nevskya and "arches" making way to the main area. In the old Petersburg commercial apartment building had such but there are three times more of them here.

If the “city context” of the complex’s main part uses the most widespread method of the Petersburg housing of XIX century the second component of the concept is the bright town-planning accent "pulling” all the main lines.
In northern part by Dobrolyubov avenue the city block is "cut" by a large ellipse, or rather sharp egg-shaped area. There is a theatre building, oval as well. The theatre and the area are similar figures, they resonate and complement each other. By the way, a few times in press they said the theatre is similar to “Nevskaya ratusha”; but in the last the shape is simpler and it is not surrounded by curved outline of the area. So, this is the development of the idea, but not its copy. On the plan it seems the area appeared due to some geometrical operation – was cut out by the building of theatre which, finished its work and " landed" in its orbit (theatre is sited not in the middle and not aside, but right on the line of area). There is in it something cosmic, brought probably by the name in honour of the stars of ballet. One more small detail – Gerasimov and Tchoban suggested spreading along the area stars illuminated at night and sign like they do in Hollywood. In the “heavenly body” of the theatre the star will dance and then "scatter" in the space of the area.

But the architects have quite a contextual explanation of the idea. Many areas in Petersburg are made this way – in the form of circumference. After the baroque architecture liked such spatial effects. With one of them – the most well-known, Dvortsovoi, the area of ballet stars "exchanges glances" through the Neva. But this is noticeable only from the space and this comparison is just figurative, but it definitely it takes place.
In general, the historical city is built on similar combination of the ”context” cut by the lines of streets and special accents – parade areas. And so the main town-planning intrigue of the project can be considered as taken from the context (or inspired by the context?).

The project has two more features also aimed to be closer to the historical city. First, it suggests saving the only unique interesting historical building on the territory – a red-brick tower of the Wine stock exchange of the end of XIX century. The tower that would be the only unique old touch in the new complex, will be transformed into a splendid multi-storey loft for the only family.

The other feature concerns not the project itself, but design of the papers for the contest. They were stylized like graphic of Ostroumova-Lebedeva who is one of the significant images of Petersburg. There can be different opinions about it, some may say the architects wanted to the project look better and deepen the impression of the concept. But the gesture can be considered as an attempt to put the real adherence to Petersburg images and pass this vision to the future architects. 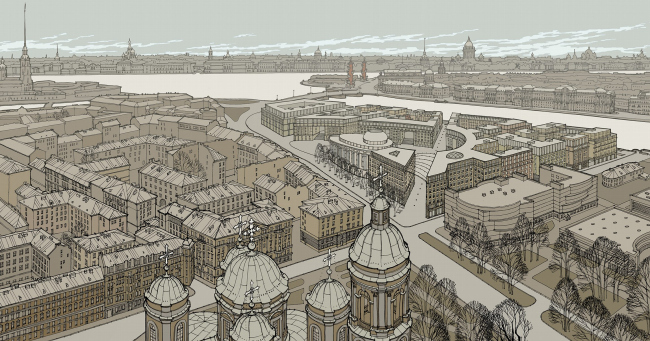 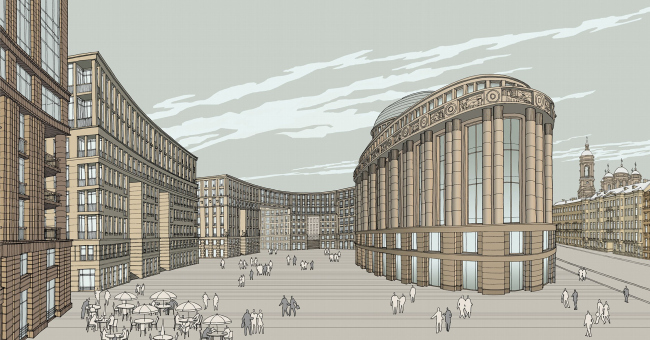