The project of the office complex in the 1-st street Jamskogo Polia,building 12 created by Alexey Bavykina workshop is approved. 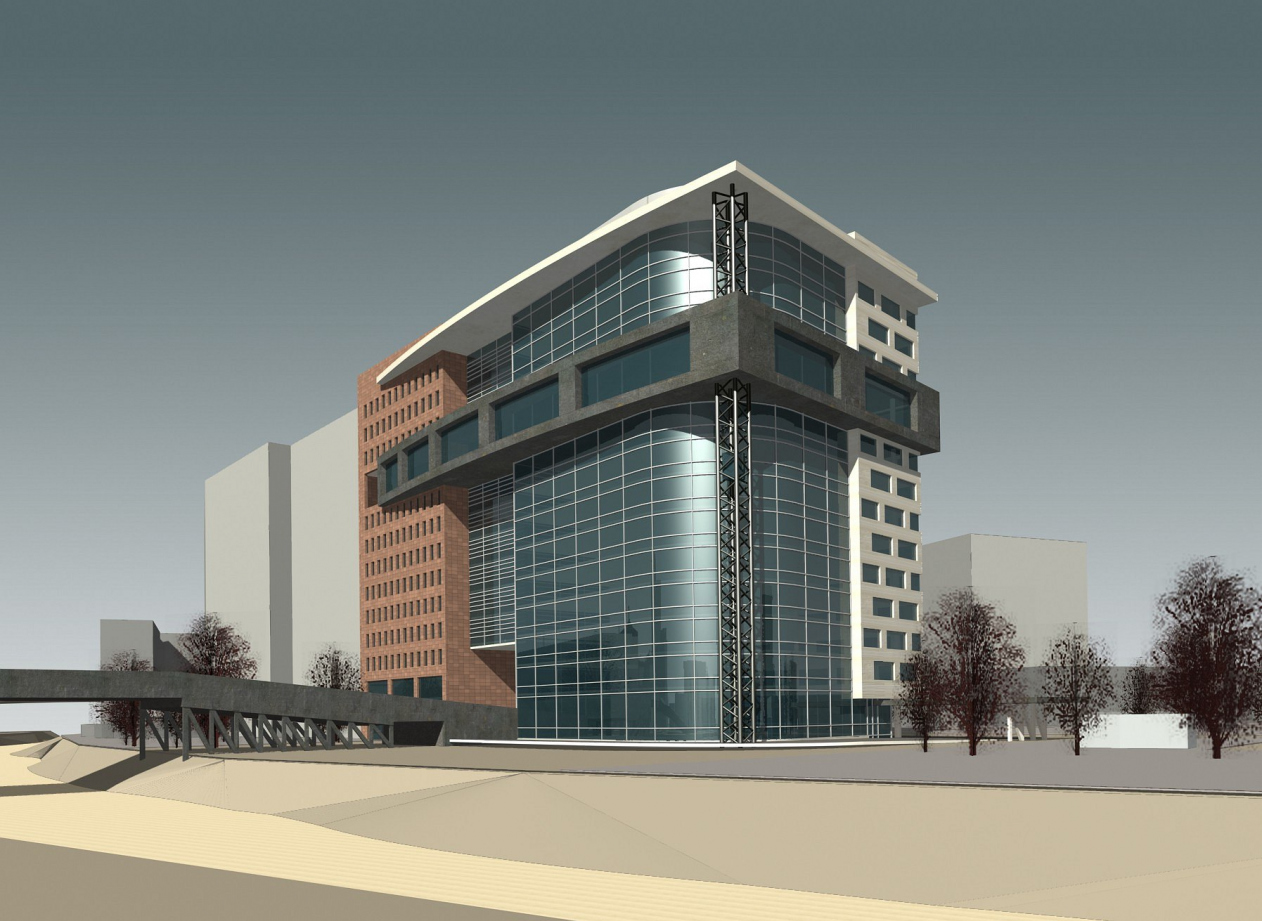 The basis of the facade composition of the new complex is the semicircular bay window and the console of the eaves crossing it, the details unequivocally perceived as paraphrases constructive masterpiece of Ilya Golosov, club Zueva which is located in the next Lesnaia street. But though revival of Russian constructivism is Alexey Bavykina's program theme, it is not the main thing in a new complex.

It is under construction on a place of former industry zone of  XIX century, near the railway. Bavykin builds the bridge in a building through a railroad tracks, he does an aperture inside of the house and leades  through it the new street to Butyrskii  Val. As a result the building appears in the center of transport streams, that is essentially important for business-complex. One more witty decision is a parking which is placed under the railway. The street, where the complex is situated, extends and becomes one of the most demanded in area. The bureau «АБ» projects the next site, and architects, according to Alexey Bavykin, have agreed about the creation of a complete town-planning composition.

The reconstruction of the industry zone of XIX century in the place of the ring railway is one of the most perspective directions of modern Moscow construction. The main problem here - how to include new formations in a fabric of city - in fact historically they were created as the isolated industrial territories. Bavykin has offered the most drastic decision: «a new building = a new transport axis ». «It is a town-planning building, - Alexey Bavykin has declared in interview ААН. It is not a composition in an empty territory, but it is the town-planning unit. And this is first of all important to me ».

Object
The house named “Medny 3.14” (“Copper 3.14”) is composed of two textures, each of which resembles in its own way some kind of precious fabric, and of three units, each of which is oriented towards one cardinal point. The architecture of the house absorbs the nuances of the context, summing them up and turning them into a single rhythmic structure. In this article, we are examining the new, just-completed, house designed by Sergey Skuratov in Donskaya Street.

Object
The new business center built in Moscow’s district of Presnya in the 1st Zemelny Lane is all about technology and sustainability. Its streamlined shapes and white facade grid are combined with a new version of vertical greenery: the green of wild grapes, placed at a distance from the facade, instead of arguing with the “pergola” grid, sets it off by contrast.

Object
Blooming Sakura, a campfire party, kids splashing in a swimming pool – no, these are not pictures from a vacation, but everyday life going on in the yards of Kiev’s housing complex “Fayna Town”. In this issue, we are examining how the utopia designed by the architects is wired, and what they did to make it a reality.

Object
The project of the new terminal of the Muraviev-Amursky airport in Blagoveshchensk offers architecture based on a modular form – endowed with a special imagery, it becomes the basis both for the carrying structures of the building and the plastique of the facade, at the same time reverberating in the interior design.

Object
The project of the housing complex “Krasin”, designed for the historical center of St. Petersburg, and situated in a very obliging place – next to the Mining University designed by Voronikhin, yet bordering on an industrial area – became the result of a thorough analysis of the specifics of historical construction on the Vasilyevsky Island, and a subsequent synthesis with avoidance of direct stylization, yet forming a recognizable silhouette, resonant with the “old town”.

Interview
In this issue, we are talking to the director of the Genplan Institute of Moscow about trends that determine the future, about the 70-year history of the Institute, which is celebrating an anniversary this year, about electronic computing in the field of urban planning and about international experience accumulated in this area, as well as about how the Institute is involved with other cities, and about the perfect document for the city development, which has to be flexible and strategic.

Object
The high-rise housing complex MOD, whose construction has begun in Moscow’s district of Maryina Roshcha next to the site, on which the new Russian Railways headquarters will be built, is responding to the “central” context of the future city surroundings, and at the same time is positioned by the architects as a “manifesto of Modernist minimalist principles in architecture”.

Contest Results
A project by DNK ag won in a competition for the science campus of the National Center for Physics and Mathematics in the city of Sarov, conducted by ROSATOM corporation in collaboration with the Moscow State University, Russian Academy of Sciences, and the Kurchatov Institute.

Object
The new terminal of the Leonov Airport in Kemerovo was built in record-breaking time, despite the pandemic. It became one of the important factors for the rapid development of the city, visually reflecting its dedication to the first spacewalk, both in the interiors and on the facades. Its main features are the “starry sky” effect and overall openness.

Interview
The head of the company Severin Project, which has been successfully operating on the market for twenty years, is sharing about the history of his company, difficulties of landing big contracts, and about the creative chance that you must jump at.

Object
The school building in the city of Nur-Sultan, designed by Vera Budko and Anton Nadtochiy from beginning to end – from concept to working documentation – became the embodiment of the architects’ method for creating a modern educational environment, which the ATRIUM architects have been developing for years. Its fundamentals include creating an inspiring environment that motivates you to create. This is why the new school received a shape of an ornamental golden spiral that symbolizes ascension to knowledge; on the inside, the building is a compound and multifunctional “city within a city” with multilevel atriums, amphitheaters, and varying routes.

Object
A story about how plans for laying a road on the border of a park turned into plans for saving the ecosystem and improving the walking trails.

Object
The project of the branch of the Russian Museum for the Siberian Art Cluster is based on the ideas of Suprematism: basic shapes, and dynamism of color and form.

Object
Stepan Liphart’s projects of Art Deco villas demonstrate technical symbolism in combination with a subtle reference to the 1930s. One of the projects is a “paper” one; the others are designed for real customers: a top manager, an art collector, and a developer.

Object
The project of landscaping the territory of the residential complex NOW in Moscow’s Nagatinskaya Valley goes beyond the limits of its task and looks more like a modern park: with viewing platforms, an embankment, spaces different in their moods, and thought-out scenarios for visitors aged between 0 and 80.

Report
Last week, the housing complex “Ty i Ya” (“You and Me”) was presented, built in the northwest of Moscow. By a number of parameters, it exceeds the originally stated comfort-class format, and, on the other hand, fully meeting the city block construction paradigm, popular in Moscow, demonstrates a few interesting features, such as a new kind of public spaces for the residents, and high-ceilinged apartments on the first floors.