The housing complex “Respublika” is so large that it can be arguably called a micro-town, yet, at the same time, it easily overcomes most of the problems that usually arise with mass housing construction. How could Archimatika achieve that? We are examining that on the example of the first stage of the complex.

The housing complex “Respublika” is one of Archimatika and Ukraine’s biggest housing projects. After the complex is finished, it is going to include 45 houses with 14 thousand apartments and highly developed infrastructure, also developed by Archimatika. In addition to a shopping mall the size of the nearby pleasure ground, the territory will also include a number of smaller infrastructure projects: from the community center to barbecue lawns with grilles and wash hand stands. After the economic crisis, which stopped the construction for a few years, the first stage is finally complete, by which we can judge about the operation principles of the entire complex. 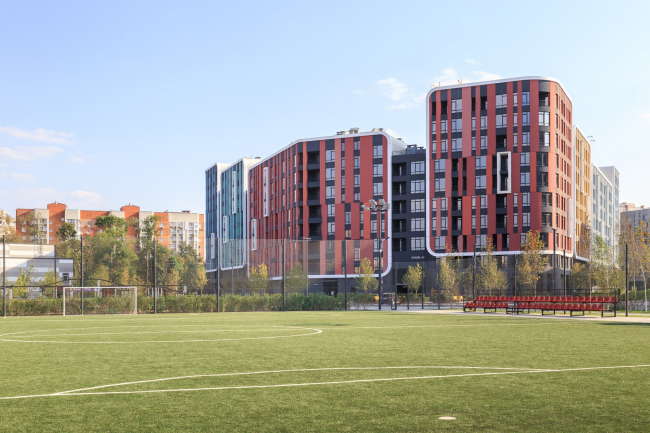 “Respublika” is situated at the south suburb of Kiev, immediately beyond the ring road, near the Teremki metro station. The neighboring “micro-districts” were built following the construction of the Victor Glushkov Institute of Cybernetics in the 1980’s – and these were also town planning experiments of those days. For example, this place included Kiev’s longest building: 68 standard sections were fitted together to form six-facet semi-blocks, looking like a molecular chain, behind which schools and kindergartens were hidden. If we are to count from the very beginning of the design process, “Respublika” is only a little over twenty years older than these urban blocks, yet the difference between them is as huge as the difference between the geocentric and heliocentric world views. The large land site and the absence of any restrictions, such as historical context or conservation zones, made it possible, according to one of the founders of Archimatika, Dmitry Vasilyev, “to create city fabric from scratch: not only houses but also the spaces between them – streets, gardens, squares, and sidewalks, overlooked by wide shop windows.”

The houses in “Respublika” form a system of closed blocks with a clear hierarchy of spaces: residents-only private yards are connected with pedestrian streets that lead to a plaza with this or that function, totaling to form an environment packed with different features that allows the residents to spend their time in different ways without having to leave the complex to go to school, or to go to see a doctor, or to go to a gym. “A city within a city” has really become a cliché, and many architects say that about their projects, but here this definition is more than justified – and, as a matter of fact, one of the goals was to make up for the Respublika’s location, remote from the center of Kiev.

The first stage consists of four urban blocks: the sections are arranged in pentagons that lie like petals around the “core” – a plaza 80x80 meters with a community center. We already shared about it, but now we would like to remind you about the eco-pond, a venue that was designed with the input from children and containing open air cafes and unconventional green architecture, all of which, put together, must turn the place into the local gravity center where people will come to see and be seen.

The section where the fifth “petal” could be contains a kindergarten and recreational facilities: tennis courts, football and volleyball fields, and a barbecue area. 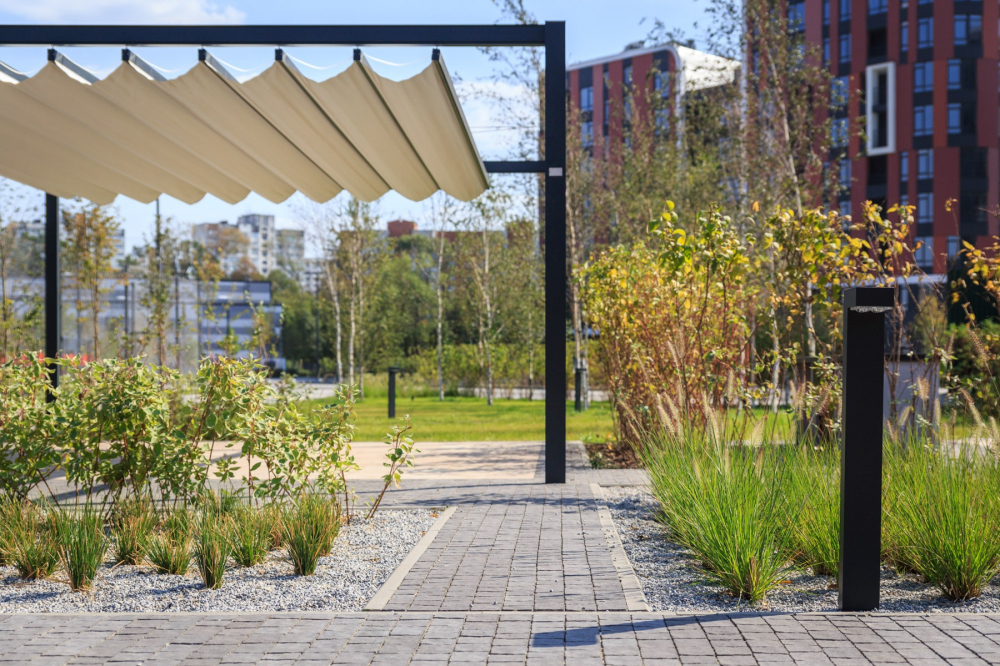 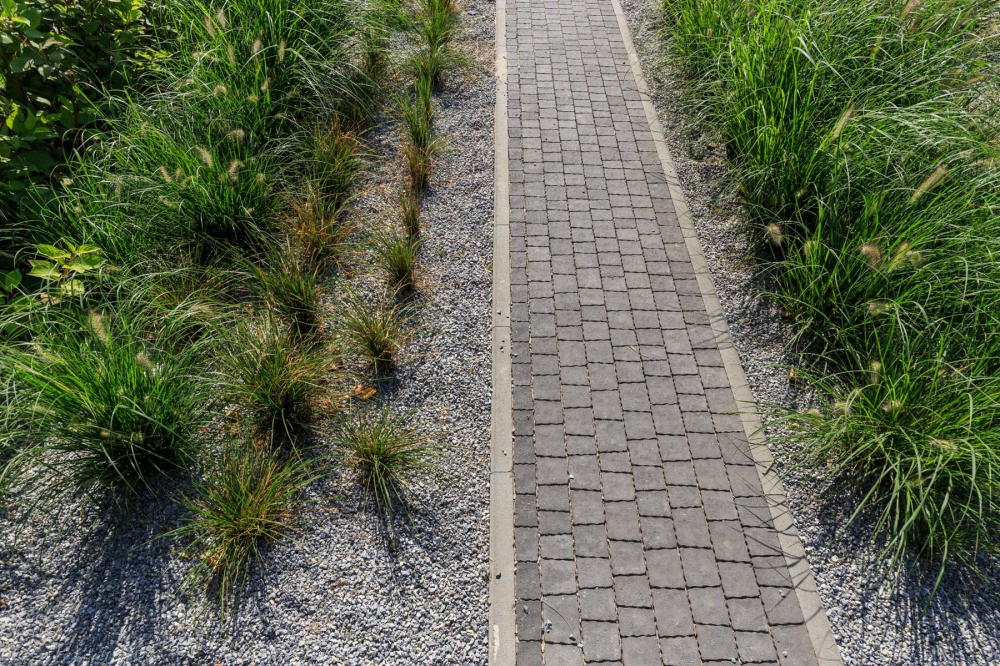 In “Respublika”, one can leave their home and walk on foot for a rather long time – taking a rest or going about their business, be that a child or an adult – without bumping into vehicles. The pedestrian route, which is easy to identify by the large geometric pattern, connects all of the houses and points of interest.

Due to the large private spaces, the residents really feel as if the complex is “their own”: the mood of the yards, protected from all sides, is deliberately set in opposition to the geometrically pristine streets. The atmosphere here is very cozy, even of the countryside kind: playgrounds of circular shape, hills, trails, tall trees, and grass growing through the pavement tiles. “Respublika” utilizes a lot of principles of comfortable housing, which Archimatika is trying to achieve, one them being individual facades, upon which one can easily find the windows of his own apartment.

The buildings’ height does not exceed ten floors, each of the sections being unique due to the color, size, and arrangement of the windows. The flat facades of the sections are also non-homogeneous: the shift of the rhythm of the piers and “switching” between three hues of stucco divide them into blocks of different height; the role of the accents is played by white “frames” that unite windows on the height of two or three floors. The common feature here is the rounded corners, also decorated with white “binding”. Neutral “pauses” of the dark-gray color is the gluing substance that holds different sections together and “sits” them on the sturdy first floor. These “ties” are of lower height; there are terraces in their roofs. 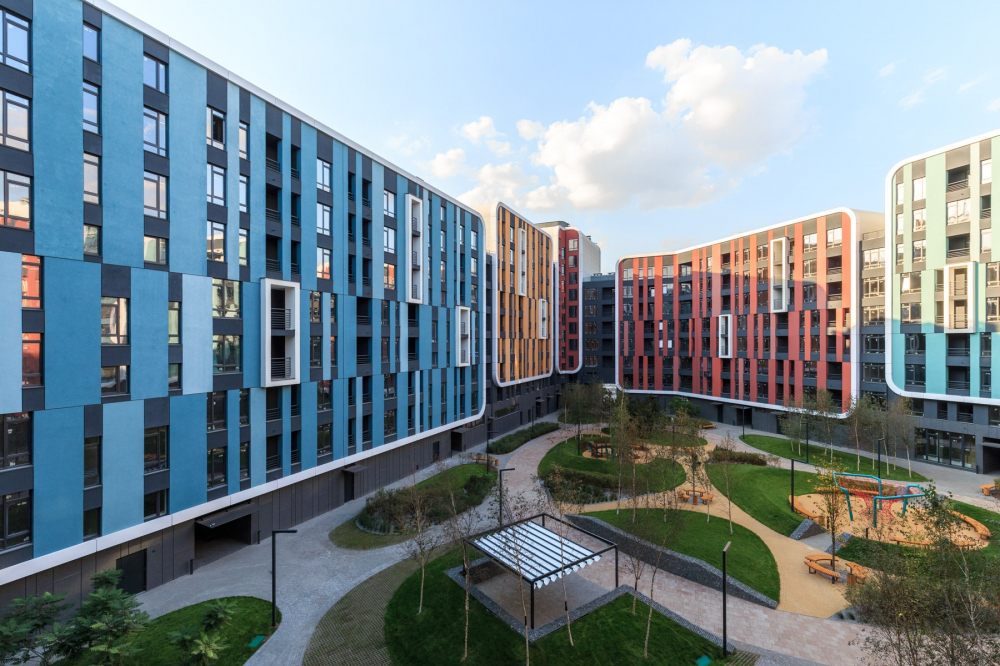 A third component of the comfortable housing, coming after the diverse environment and individual facades is the apartment floor plans. Already in the first stage of “Respublika”, these are PRO apartments: by the moment when the construction resumed, the architects tried as much as possible to bring the plans up to the new standards developed by the company. In Archimatika’s portfolio and Archimatika’s creative search, “Respublika” occupies an intermediate place between “Comfort Town” and “Fayna Town”. Closed yards, flat facades, silhouettes, and work with color migrated from the previous projects, but there also appeared a public pedestrian zone, and lots of venues that provide an opportunity to spend more time outdoors.

In the next stages, Archimatika is intending to perfect the techniques that it has developed. The range of colors will become more sophisticated, the architecture will evolve, opening more typologies and vantage points. The pedestrian space will be growing and becoming more complex, tying in all of the parts of the micro-district and “plugging them in” to the plaza before the shopping mall. Starting from the fifth stage, the urban blocks will become more open, and their territory will become more transparent.
Text by: , Aleksandr Popov, Dmitriy Vasilyev
Translated by Anton Mizonov