The Kiev-based architectural company ARKHIMATIKA has developed a new standard for the apartment floor plans used in housing projects: their “PRO-apartments” make every square meter of the floor space useful and become one of the prerequisites for comfortable housing construction.

The tedious work on designing detailed floor plans scares a lot of architectural firms away, in spite of the fact that these days this task is just as important as designing the façades – i.e. giving identity to the mass housing construction. ARKHIMATIKA was not in the least daunted by the scale of the task, and developed a new standard for apartment floor plans – the PRO-apartments.

The super task that the architects set for themselves could be put in this nutshell: “so many families, so many floor plans”. To achieve that task, ARKHIMATIKA came up with the basic types of apartments that at the expense of optional elements can be fine-tuned indefinitely to fit the needs of a specific buyer. At the same time, the inner space is organized in such an efficient way that every square meter works.

As a starting point, the architects dissected the apartment into “morphemes” – the basic functional zones. It turned out that there were eleven of these: kitchen, dining room, living room, bedroom, study, anteroom, wardrobe, bathroom, utilitarian closet and the washing machine space, fresh air zone (balconies and stanzas), and the FREE-zone – a free space for yoga practice, dancing and kids’ games. Then the architects defined what types of households and residents there were out there: single and married, young couples, families with kids, three-generation families, and so on. For each type, they developed several floor plans with a corresponding “scenario”, meaning the ratio of the functional zones. Due to the fact that different families of the same type may have different needs – some may want a spacious children’s room, some may want a large dining room and a comfortable study, and so on – altering these functional zones, the architects came up with floor plan subtypes. The architects compare this to the experience of buying a new car: “just like we choose the class of the car and its configuration, studying its manual with all the information about all of the car’s parameters – this was the way that we dissected the apartment by its parameters” – they say. Before getting down to the actual design process, the company conducts an opinion poll among the potential buyers, finding out what specific parameters of the apartment they need, paying particular attention to the family’s lifestyle. Ultimately, the architects get a buyers’ matrix, on the basis of which they decide what kind of apartments, with what parameters, and in what numbers will be there in the new building. Each PRO-apartment – says the director of ARKHIMATIKA Alexander Popov – goes 100% home in terms of the family's demography, budget, and lifestyle.

The square footage of PRO-apartments ranges from 17 to 200 square meters. The apartments are classified not by the number of rooms but by the number of bedrooms: from a studio to a four-bedroom apartment. Further, they are divided into classes. For the sake of convenience, the international classification of clothes size is used: XS, S, M, L, XL and XXL. The higher the class, the more widely the functional zones are represented.

For example, in a one-bedroom apartment, as we move from XS to XL (from 28 to 90 square meters), a shower cabin will be at some point replaced by a full-fledged bath; a large dining table, a working place, a wardrobe, and a full-fledged kitchen will appear. The apartments with a larger number of bedrooms are getting such “bonuses” as a large bathroom or a wardrobe with a window, and a master-bedroom, which is essentially a bedroom with a direct access to an individual bathroom, a free zone, and a terrace. ARKHIMATIKA takes special pride in three-bedroom apartments that are practically not built anywhere else in Kiev now. 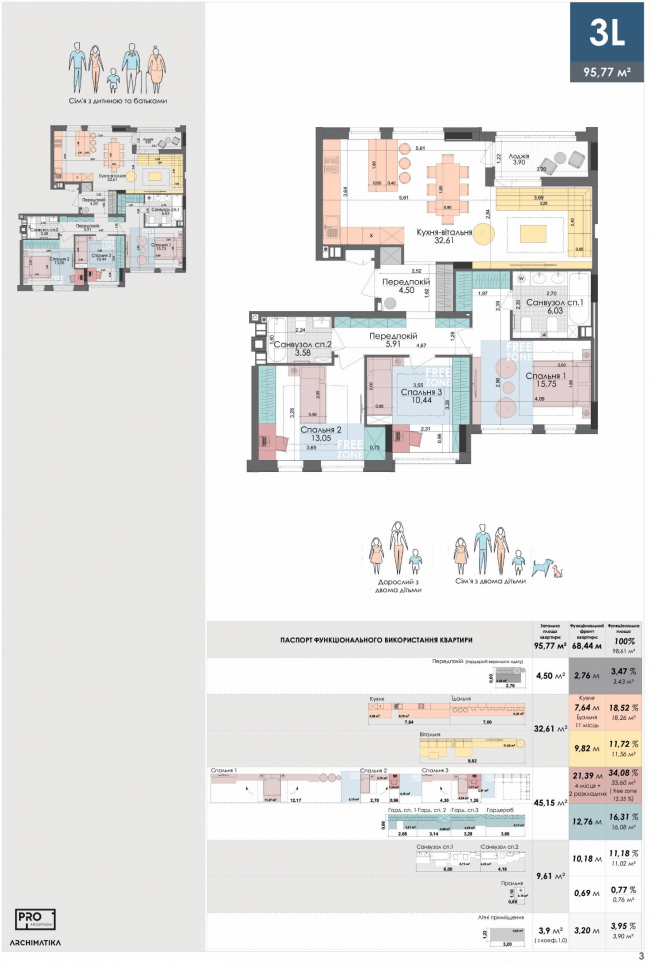 Also, the architects were able to help the two-level floor plans recover their charm and popularity: these are commonly known as poor sellers because “it’s inconvenient having to go up and down the staircase”. However, in the loving hands of ARKHIMATIKA they turned into “villas” on the top floors, with an area of 100-200 square meters, a panoramic view, and a cozy little yard/terrace of their own upon the roof. Getting back to the smaller PRO-apartments, one must note that their floor plans also provide for the scenarios of family development: if a baby is on the way, there will be a place for the cot. When the child has grown, it is suggested that he or she moves to the bedroom, while the parents move to the studio space of the living/dining room. But then again, the architects hope that this solution will be temporary and applicable until the entire family moves to a two-bedroom apartment! If the buyer is baffled by this variety, the developer’s sales department will help him or her make sense of the numerous floor plans with the manual named “Passport of the Functional Use of the Apartment”, which the architects created. It includes a slip with the floor plan and the functional zones of the apartment, which are color-marked. Also, the technical passport contains two characteristic parameters:

1. Functional front – the total length of the furniture that stands in a conditional horizontal line. It visually shows such linear zones as wardrobe and the kitchen front, as well as other zones, which allows the buyer to compare them with one another.

2. Functional space – the floor space of the furniture and other equipment necessary for a certain function, as well as the floor space necessary for its usage. The total functional area of all of the apartment’s zones may exceed the actual physical floor space – due to the fact that one and the same space can be used for different functions. It must be noted at this point that the arrangement of the furniture in the PRO-apartments is not “carved in stone” – the buyers are also given several options to choose from. Due to the fact that the architects use furniture of standard dimensions, the absolute majority of the floor plans are rectangular, and changes can be made without any significant damage to the efficiency. The sales department performs yet another function – it gets the customer feedback, thus making the whole selling process truly interactive. The ARKHIMATIKA catalogues currently include about two hundred planning options, this number growing with each new project. When a new option comes around, the architects compare it to the closest-in-the-line PRO-apartment of a smaller square footage. If the extra meters do indeed yield some extra comfort, this planning option gets a PRO status; if not, it is subject to revision.

Such diversity of planning options makes the design process more complex and expensive but, as Alexander Popov claims, this does not affect the price of the PRO-apartments. ARKHIMATIKA is able to keep up its standards even with economy class housing construction. For instance, the “Pasechny” housing project in the city of Lviv (where the real property prices are almost exactly half again as little as they are in Kiev) nevertheless consists of PRO-apartments. Still, building a house with such an insane number of floor planning options is much more difficult than duplicating one standard section: the framework is growing much more complex, and you need to install doors and windows of different sizes. Implementing such a project would be impossible without a highly organized and professional building contractor. ARKHIMATIKA was the first to implement its approach with the building company KAN, with which the architects have been working for more than twelve years now, and with which they have built a dozen of projects.

The architects of ARKHIMATIKA came to the idea of optimizing the floor plans in 2015 when they developed for KAN a small series of SMART-apartments in the housing project named “Comfort Town”; these were optimally planned but small apartments. Then, developing this idea, the architects came to a conclusion that the principle of functional usage of each square meter is also relevant for large areas of residential property – and this is how the PRO-apartments came about.

Today, in addition to the 40-hectare super-city-block “Faina Town” (KAN), in which he architects had the opportunity for presenting virtually the entire line of PRO-apartments, 7 more housing projects are being built, in which the floor plans were developed on the basis of the PRO concept, in collaboration with KAN: “Respublika” and the last stage of “Comfort Town”, in collaboration with bUd development: “Slavutich 2.0” and “Time” in Kiev, and, last but not least, in Lviv, in collaboration with the company “Vash Dom” (“Your Home”), the housing complex “Pasechny”.

The PRO-apartments are but one of the components of the PRO-housing concept, which, as the architects believe, must one day replace what they call “the discomfort class”: the faceless, inconvenient, and human-incompatible housing. Here are other principles that ARKHIMATIKA sticks to while creating the “new generation” housing: The housing architecture, in addition to solving all the utilitarian tasks, from sewage disposal and heat retention to installing air conditioning units, must express the identity of each house and each city block in such a way that the residents could proudly post selfies made against the background of their house, and the tourist would include walks through these residential areas into their tourist routes. In a multimillion city, there will always be a lack of space, and, therefore, a car that occupies a lot of space is too much of a luxury. This is why parking space – a part of the city territory eaten up by an immobile car – must always be paid for, both on the municipal land and on the territory of the housing complex. The public space of an urban multi-apartment house must be much larger than just the entrance to the hallway and the corridor with apartment doors; it must also provide all of the functions that are otherwise financially inefficient being placed inside the apartment, from a coworking area for the adults and a playground for children to a swimming pool and a spa center.  Strewn with residential buildings, the windswept field of a “micro-district” (a soviet term) must remain in the XX century where it belongs. The XXI century is reviving as its main urban planning unit the “good old” city block. However, this will not be the literal replica of the city block of the XIX century: it will not have the “dungeon” yards and the contrast between the grand splendor of the street façade and the utilitarian bleakness or the inside yard side. This is the new quality of open and semi-open spaces, public and semiprivate alike, which create the optimum building conditions both for apartments and public functions.

The ARKHIMATIKA projects prove that the mass housing construction can indeed be humanize as early as today, in spite of all the norms and limitations, and without much apprehension about the “harsh market realities”, and even increasing the sales – because the diverse line of offers also works great as a marketing technique, adding “extra points” to the housing project and extra popularity to the architects that designed it.
Text by: Aleksandr Popov, Dmitriy Vasilyev,
Translated by Anton Mizonov