​The Path to Diversity

A strict hierarchy of the arrangement of residential buildings and an abundance of interesting details of façade decoration are the two main features of the RiverSky housing project situated at the bend of the Moskva River – designed by GREN. The RiverSky housing complex will become a part of a large-scale project of developing the chunk of land lying alongside the Simonovskaya waterfront, the one that the architects and town planners have long since been working upon. The last edition of its development strategy was developed by KB Strelka with an active participation by the investor, GK INGRAD. There are plans for landscaping the waterfront, reconstructing the Torpedo Stadium, increasing the number of infrastructure projects, and building mixed-use (predominantly residential) complexes on the river banks. One of the land sites stretching between the stadium and the beginning of the river bend is developed by the architectural firm headed by Katerina Gren. The GREN. architects came up with a volumetric composition, floor plans, and façades of the complex. This location entails quite a bit of responsibility: the land site is situated in the center of the city; on the one side, the housing complex will be forming the waterfront, on the other side, it cannot ignore the historical environment. Nearby, stands the Simonov monastery, and DK ZIL, designed by the Vesnin brothers and built on its territory.

GREN. arranges the eight buildings of the complex into two clusters separated by a promenade that leads to the waterfront. The semi-blocks are different, yet they consist of similar elements: each of the two has a landmark tower standing closer to the river, an elongated building with ledges, conditional “slabs” of the high-rises, and the “links” of the townhouses. Which forms a diverse silhouette: the height differences are not just considerable – up to 29 floors – but frequent as well. Thus, the volumetric solution turned out to be a hybrid one: in the low-rise part it has a “city block” character with houses asymmetrically surrounding semi-closed yet still spacious yards, while, as we go higher, the houses transform high-rise slabs, turned, much like lamellas, at a 45-degree angle to the waterfront, stretched from north to south. Which makes it possible to provide the maximum amount of sunlight to the apartments, as well as opens up the path for the river breeze and panoramic views from the windows. Just as important are the views of the architectural monuments of the Simonov monastery that open up from the water area, chief of them being the “Barrel” tower that is seen (assuming we are sailing a boat down the river) between the houses, getting into the array of the residential towers as an unexpected, yet still unique, inclusion. 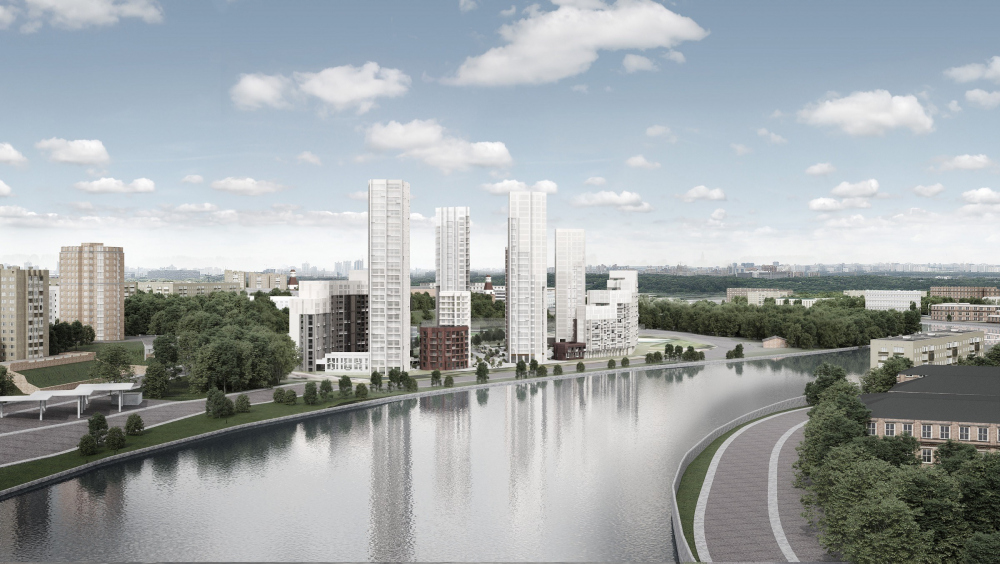 The diversity, which was set by this volumetric solution, is also supported by the façades. The architects bring forward the combination of textures, using several façade decoration materials: Klinker brick and tiles, fiber cement panels, tinted glass, and metal. The architects are also working freely with it, liberally applying various techniques and stylistic devices: one can see here volumetric ornaments and perforated brick, openwork grilles, geometrical patterns, printing on glass, flute-imitating piers, noticeable elements of navigation, deep colors, and combinations of contrastive textures. This whole whirlpool of ideas is arranged into a well-organized system, which can be best described as “tasteful”: the complex looks light and elegant. “For each of our clients, we create custom design that completely meets his needs, and then we inscribe that project into the environment – Katerina Gren is saying – Every little detail is important for us”. 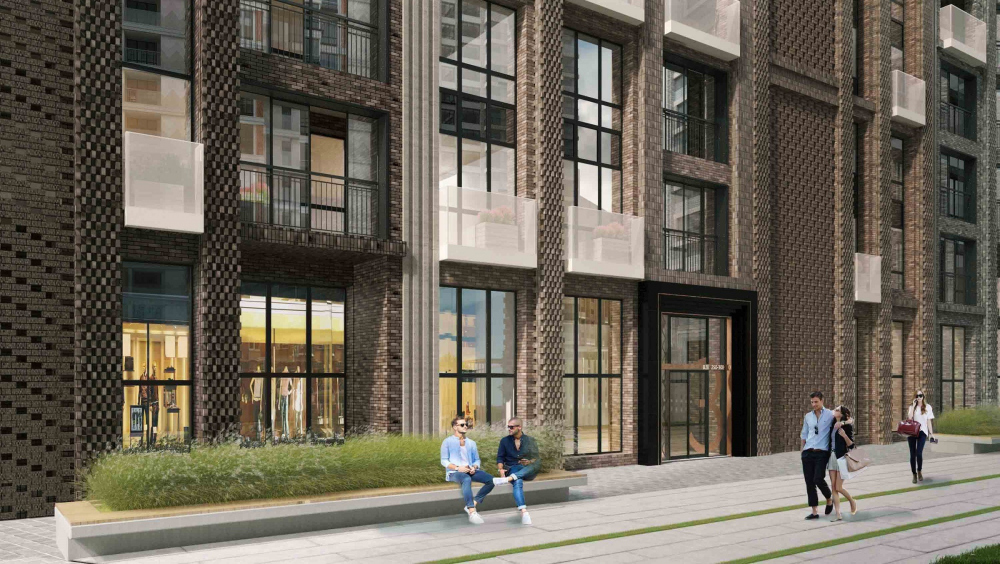 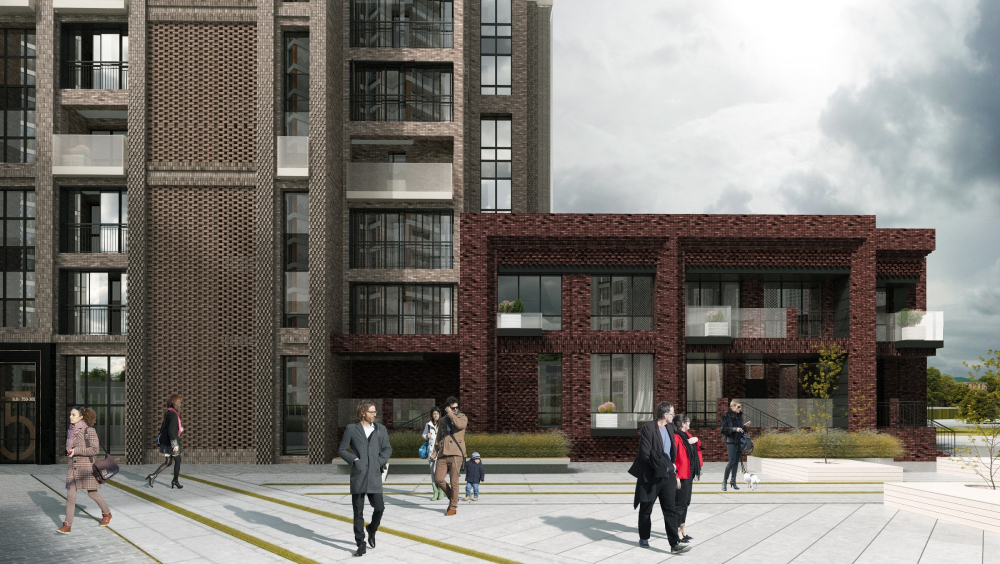 The façades of the top floors in the upper part of some of the buildings, however, are made terminally simple – you will not see here the abundance of details and textures, just strict geometry of laconic milk-white panels. The sky-high rooftops attenuate still more the space of the city blocks, “latching together” the buildings of dark brick with its light-colored towers, adding the modernist lightness into this respectable-looking image, not without a twist of “textured” conservatism. The third level of diversity – that comes after the variety of heights and façades – are the floor plans. Each building is different, and there are quite unconventional solutions to be seen: a bathroom or a living room with a window, stanzas with pull-out panoramic glazing, which can be turned into terraces up to 2.7 meters deep, and so on. Not every Muscovite has an opportunity to enjoy the beauty of the panorama of the Moskva River, the panorama of the historical part of the city, or simply to admire the sunset – without leaving his residence. In addition, thanks to the Finnish-made system of frameless glazing, the panoramas will be “penetrating” the apartments, even in the cold time of the year. 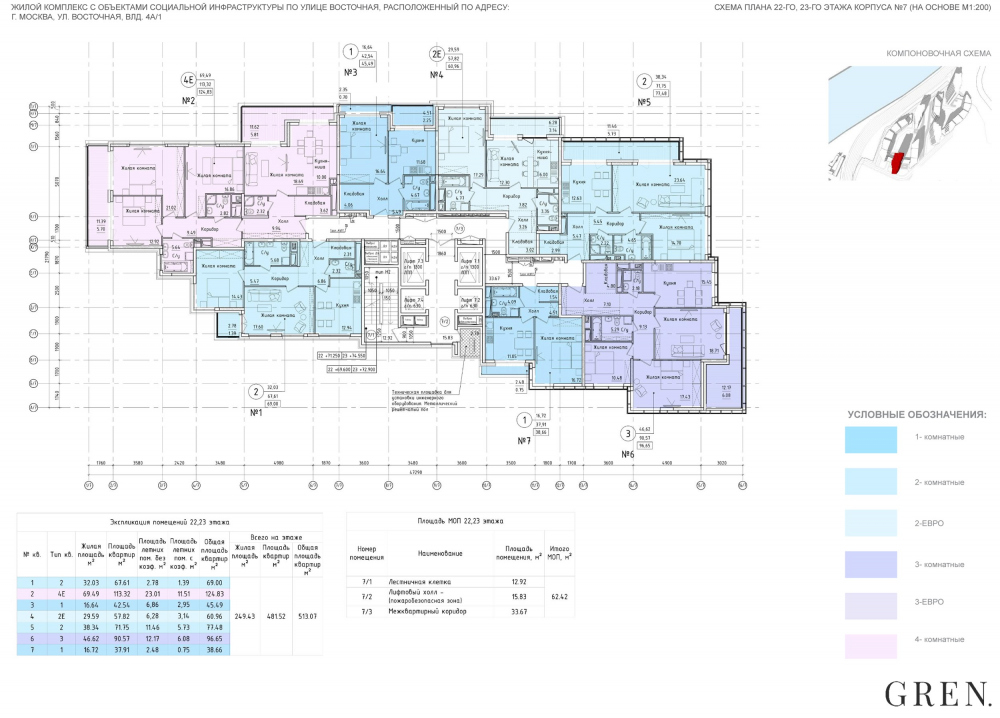 The location and the status of the complex allowed the architects to include into it not only townhouses but also two-level apartments up to 7.5 meters tall. Some of them, thanks to the ledges of the volumes, have small patios and exits to their own terraces on the operated roof of the joining section – a great place for making parties or just spending an evening with your family. Totally, RiverSky has 1342 apartments in it, the number of rooms ranging from one to four. GREN. also designed the entrance groups and prepared the landscaping project. And, although later on the client organized independent competitions – their results being that the public bottom floors will be decorated by UNK project, and the landscaping will be done by Wowhaus – the versions developed by Katerina Gren were fitting in nicely with the project of the complex and were its natural continuation, and that’s why we will say a few words here about these sections that “remained on paper”.

Already in the flutes of the bottom floors of the buildings, as well as in the frame portals of the entrances, one can acutely feel similarity to the generalized Art Deco classics. Proposed by the GREN. architects, the projects of the entrance areas develop and enhance this theme: the light-colored stone is combined with polished metalwork, while the strings of crystal suspensions add to the overall beauty. The diamond-shaped ornaments on the façades are supported by the decorative pattern of the windows and grilles; the stone flutes are echoed by ribbed copper friezes under the ceiling, and even the row of tall lamellas is resonant with the volumetric organization of the slab towers of the complex. The landscaping project proposed by Katerina Gren accentuated the promenade that stretched between the houses in the direction of the Moskva River. Its axis is marked by alternating benches, tubs with trees, and “strokes” of lawn rectangles. In the yards, the theme is supported by white pergolas and climbing rope nets for children bent in large wave-like shapes, almost like sculptures. The bushes and trees alternate with lush bunches of topical cereal plants, lawns being on a level with the pavement. Due to the fact that in the future RiverSky will become a part of a large recreational territory – with a stadium, a waterfront, and a few little parks –the bottom floors will be occupied by the retail function. “One of the main tasks that our company sets for itself is creating new gravity centers within the city space, ones with unique architectural and town-planning volumetric solutions. We want to do projects that make their own history – Katerina Gren says – And each of them is about the idea of a uniquely comfortable environment that combines architectural bravery, harmony, and spiritual aesthetics. The residential area RiverSky completely answers these definitions. This project has a lot of soul to it”.
Text by: , Katerina Gren
Translated by Anton Mizonov