In this issue, we are covering the results of the competition for the architectural and town planning concept of “Rublevo-Arkhangelskoe”, which was once supposed to be turned into a “city of millionaires”. The competition took place in the fall of 2018, with three teams winning: Archea Associatii, Nikken Sekkei, and Zaha Hadid Architects, each one in collaboration with their respective Russian partner – ABD architects, UNK project, and TPO Pride Architects.

Last year in October, an international competition took place for the concept of developing one of the largest territories of Moscow’s west: a 460-hectare chunk of land, 4 million square meters of housing, and some 66 500 residents – Rublevo-Arkhangelskoe in the Zakharkovskaya Poima. The competition was held from May 22 till October 3; the results were announced on the 22nd of October.

Historical Background
This piece of land has been in the developers’ focus of attention for quite a long time: since 2004, word went round about the “city of millionaires” that was designed for 20 thousand people, and designed in the spirit of historicism by John Thompson. In 2007, the project was included in the “Accessible Housing” program, its population increasing up to 40 thousand; many reputed Russian architectural companies were invited: Pavel Andreev, Aleksey Vorontsov, Sergey Kiselev, “Ostozhenka”, and others (read the whole story at ec-a.ru).
In 2011, the development project of the Zakharkovskaya Poima was transferred into sole ownership of Sberbank; right about that time plans were announced for building here the International Financial Center. In 2012, Rublevo-Arkhangelskoe was officially proclaimed a part of New Moscow. In 2013-2014, they conducted a competition for the project of IFC, which was won by Team Moscow – Astoc / HPP, headed by the German company Astoc GmbH & Co. KG, and a contract was drawn up about the modification of the project together with Genplan Institute of Moscow.
In 2015, the expected technical and economic performance of the project was adopted, and public hearings conducted; in 2016, they adopted the site plan that was developed by Genplan Institute of Moscow. Compared to the period of 2004-2009, the area of the project expanded from 430 up to 460 hectares. In the end of 2017, they presented the “Smart City” concept, which “for certain reasons” came to replace the idea of IFC. The Smart City project is led by AO “Rublevo-Arkhangelskoe”, which is part of PAO Sberbank.
The territory of Rublevo-Arkhangelskoe on Google Maps:
***
Smart City and its parameters
The “Smart City” concept presupposes high-technology solutions, in which an important part is played by a single technological platform that serves to unite the city people; environmental concerns are also taken into account. It’s easy to see that this concept is very resonant with the idea of “city of innovation”, Skolkovo, situated ten kilometers south of Rublevo-Arkhangelskoe.
The company’s website describes this city as one that is meant to ensure efficient work, comfortable life, as well as active and meditative recreation. There are plans for building some 800 square meters of offices (possibly, a lot of them will be the headquarters of Sberbank), and three times as much (2.6 million square meters) of housing stock, most of it, more than 90% of the total amount, situated in multi-apartment buildings, prevalent being the elite business class, 53%, followed by comfort class, 37%, and finally, a little less than 10%, the low-rise housing – the latter will occupy the area closer to the border with the Arkhangelskoe Estate, where height restrictions apply. In accordance with the standards, there are plans for building 8 schools, 15 kindergartens, 2 health care centers, one fire station, and one police station; 64 890 square meters of hotels, 196 840 square meters of retail, as well as a 132 000-square-meter shopping mall. 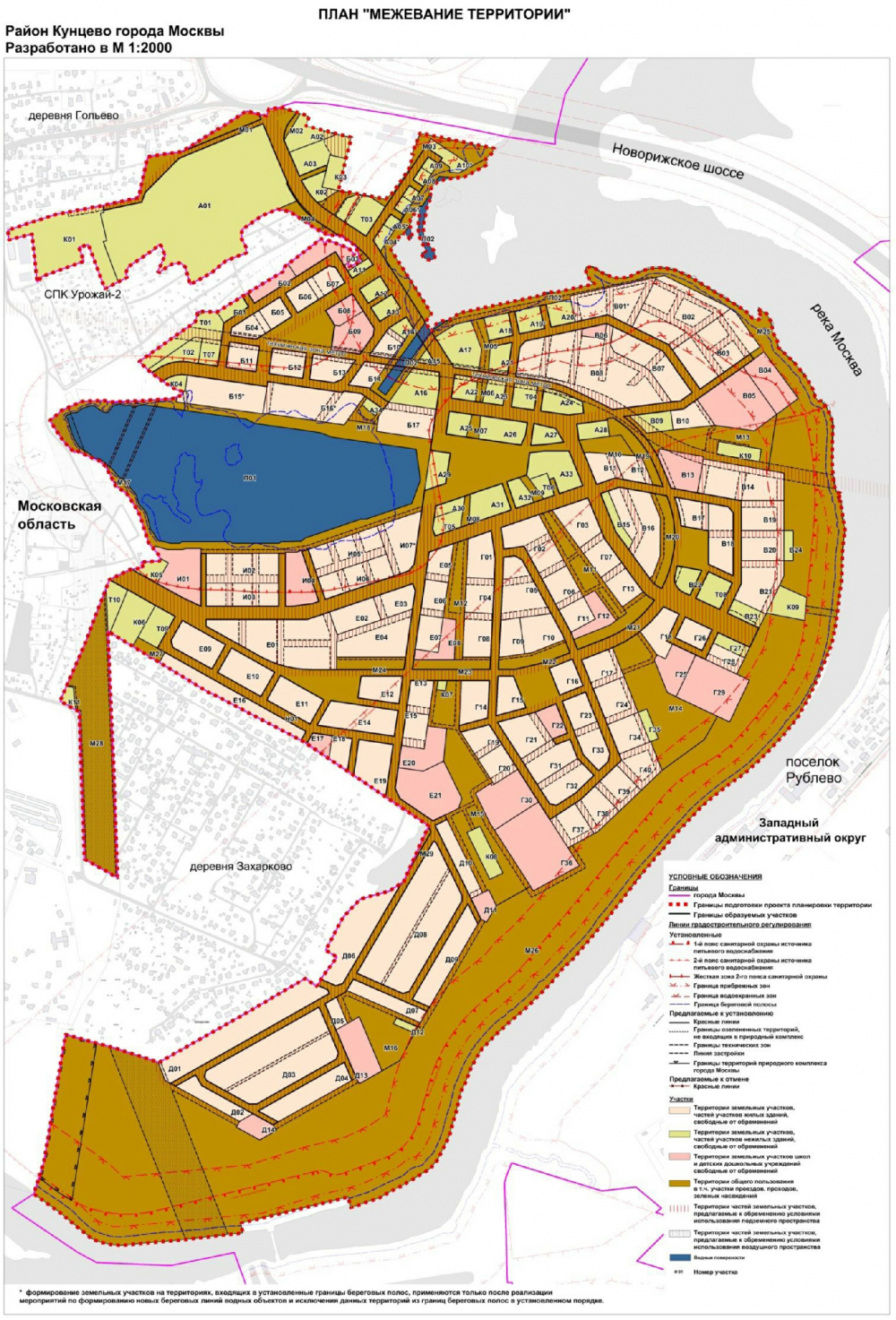 The parklands must occupy about a third of the entire area, plus 7 kilometers of the green waterfront of the Moskva River, and a 30-hectare lake. Vehicle-free yards, and 30 kilometers of bicycle roads. The Arkhangelskoe Estate heritage site is 2 kilometers away from here on a straight line; 4 kilometers away on a straight line are the buildings of the government of the Moscow Region, designed by Mikhail Khazanov. These are quite likely to be seen from at least half of the windows.
A new “Rublevo-Arkhangelskaya” metro line will be also build here, 19 kilometers long; its construction will be financed jointly by Sberbank, and it will run from “Shelepikha” station, linking the “Smart City” to the “Moscow City” business cluster. The “Arkhangelskaya” station will be the last but one in it; it will be located between the lake and the river, next to the center of the area. There will be also an “Ilinskoe” station, the terminal one for the time being.
The Smart City project is due to be implemented in four stages, the construction beginning in 2021 and ending in 2030.
***
According to the chairman of the judging panel of the competition, Stanislav Kuznetsov, the participants and the experts were to “grope for something that would stay unique not just for years, but for decades to come <...> We must use the world’s best practices and the most advanced ideas to make this city not only technology-based but shaping up the people’s lifestyle as well”.
Thus, the competing companies proceeded from the site plan, developed on the basis of the project that won in 2014 and was approved in 2016. They worked with pre-approved demarcation, redlines, borders of capital facilities construction, and the announced Smart City concept – the original “givens” defined quite a lot of things. In the central part, closer to the north, east of the lake shore, the site plan includes the office buildings with residential houses surrounding them, like they would around the “city” in its own right, very much like the old townships that were built around a Kremlin or a monastery. Therefore, the composition with a high-rise office center was pre-defined for all of the contestants. Meanwhile, one should assume that on an area of 461 hectares any preset parameters would still leave enough room for the architects’ creative freedom.
According to the task of the competition 2018, its participants were to “develop the vision of the project, activity scenarios, the functional content program, and the principles of forming the unique attractiveness of the urban environment and living in this area, as well as present their “smart” ideas”. The contestants themselves chose what was going to be the first stage of construction, and came up with the sketches for building on this territory with detailed elaboration of architectural and planning solutions for all the main types of buildings in the first stage.
Totally, the competition involved seven architectural teams, each with a foreign leader and a Russian local partner. Four collaborations did not reach the finals:
The project was one by three consortiums:
The three finalists are named in an alphabetical order, not in the order of priority. It is expected that they will be working together; possibly, the best ideas will be combined and improved. As AO “Rublevo-Arkhangelskoe” emphasizes, the end project will not be identical to any of the three winning proposals. In addition, the organizers say, there are also plans for inviting to work on this project “the top architectural companies from different countries for developing headquarters of the office residents, new housing standards, comfortable public spaces, and high-profile cultural projects”.
A brief review of the concepts has been posted on the company’s website, the project by Zaha Hadid Architects getting a slightly more detailed coverage at Archdaily. We asked the organizers for a little bit more detailed information.
Incidentally, we will note here that the Russian architectural market is witnessing the appearance of a few steady collaborations: Nikken Sekkei and UNK project, just as Zaha Hadid Architects and TPO Pride Architects, were involved in the competition for the best pilot venues for Moscow renovation.
“A City for Every Generation”
Archea Associati / ABD architects 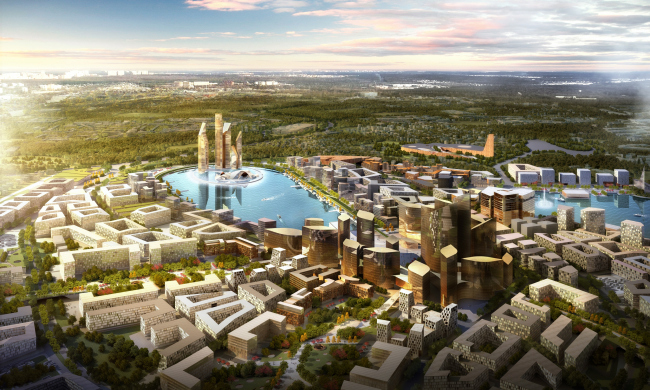 The central office part looks noticeably similar to the Moscow City: the arc-shaped glass façades are reminiscent of the Federation Tower, while the smooth chamfers of their tops look very much like Sergey Kiselev’s Mirax Plaza. The silhouette of the central towers is pyramid-like, while on the plan they are placed along the contour of the triangular plaza before the eastern lake shore. 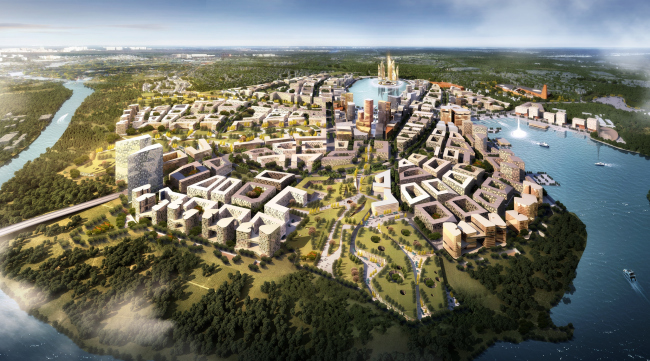 “In its concept of the new city, the team of Archea Associati, in consortium with ABD Architects, paid special attention to modern technologies, diversity of architectural forms, landscape design, and sophisticated automobile and pedestrian traffic schemes” – the press release says. The organizers also note the proposed by the authors “original multilevel solutions for all-season public spaces” – one of them, with an operated green roof and a “television” cantilevered structure that overlooks the lake, is situated on the plaza. The strong sides of the project also include “interesting locations for business residents” and full-fledged infrastructure in each district of the city, making the housing areas independent of the central part. The slogan of the project – Linked City – has many meanings: in addition to the Russian translation, proposed by the authors, which can be also interpreted as “interacting city”, the English name brings obvious associations with IT terminology, including the proverbial hyperlink. Meaning – it is linked in the sense of being interactive on different levels – a rather futuristic concept. In their proposal, the authors developed the two already mentioned key concepts of a “smart city” – environment and smart technologies. The large amount of public spaces must ensure the development of social interaction and foster a creative environment. The futuristic shapes of the office towers have been defined by the pattern of the prevailing winds and look as if they were “washed” by the steams of air. The flexible glass façades are dissected by thin ribs; the ledgy roof will have large operated terraces commanding the lake views. “The team of NikkenSekkei, in consortium with UNK project, has built its concept on the combination of advanced technologies applied for designing the engineering systems, creating a smart system of managing and developing the connections within communities, at the same time preserving the unique natural resource of this land and creating new green spaces” – the organizers explain. 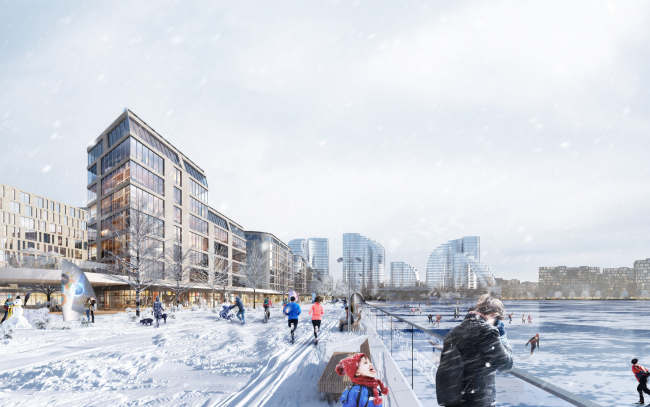 Zaha Hadid Architects traditionally placed their bets on nonlinear volumes. The glass façades are dissected by an “exoskeleton” of dense contours, in whose 3D outline one can see an arrested flight of the gymnast’s ribbon. On the other side, the houses, oval on the plan, bear a mark of retrofuturism with a nod to the 1960’s, which can be traced back to the multidimensional name of “Satellite City”, in which one can see the allusions to the romance of space exploration, and to the Soviet “science towns”, whose splendid galaxy is about to be augmented by the innovation town of Skolkovo and the currently designed Smart City. The Zaha Hadid project provides for a few “nuclei”, each of which features its own specialty of extra public spaces: “art residence” (the cultural nucleus), the laboratory of urban solutions (intellectual nucleus), all-year-round public spaces (space nucleus). According to the judging panel, this concept is different than the other projects by this “star” architectural firm because it is not about “pure architecture”, and proceeds from people’s needs.