The “Ray” Approach to Architecture

The project of a shopping mall with a food court and a market to be built in the district of Barvikha, developed by the architectural firm “Mezonproject”, combines a soft ecological image and modernist molding of the architectural volume. The “rays” on the façade accentuate the contours of the building and show the directions of the roads as well.

On the Staroe Rublyovo Highway, next to the entrance to Barvikha, the road makes a sharp turn and goes down. At the crossroads of the terrain drop between the high and the low riverbank, there is an L-shaped land site, allotted for the construction of the future complex. “This place is really beautiful; it is like a pivotal point. Back in the old days, they used to build churches at such places” – says the architect Ilia Mashkov. This will be the first public building on the way from Moscow, it must set a certain standard, at the same time fitting in with the surrounding context.

The Rublyovo Highway area is essentially a mix of private residences built in the Soviet and post-Soviet times, which can hardly be considered to be a well-balanced kind of environment. To a certain extent, the architects were facing mutually exclusive tasks. “The so-called “Rublyovka” is a fashionable district. It’s important to remember here that you are dealing with a consumer group that is hard to impress: these people saw it all. Plus, this area is pretty special in terms of rules and regulations: you’ve got private mansions all over the place, and you need to comply with the height restrictions. That is, you need to be reserved but at the same time find some hook to attract the attention of the local residents and the motorists driving down the highway as well”. The company conducted an internal competition for the idea sketch of the building. Ultimately, the architects settled on a rather soft ecological image proposed by Andrey Kolpikov and Nikolai Vozvyshaev, adjusting it for a large public building. The client liked the concept.

As for the function of the building, the final decision has not been arrived at as yet. Most likely, this place will be a food court – a market in the historical sense of this word, where you can taste and buy food, as well as have it cooked and then have it on the spot. “People tend to think that a food court is a recent invention but in fact this is not quite the case – Ilia Mashkov says – If you take a walk in Pompeii, for example, you will see the tabletops, on which they would sell food, and even pieces of cutlery where they cooked it. As centuries went by, it was only the name that changed”.

One of the project’s tasks was to highlight the function by literally demonstrating it. For this reason, the façades, especially the ones that face the crossroads and the highways, are opened up in glass surfaces: in the lower tier – by fine facets, and higher upwards – by lamellas, spaced widely apart. 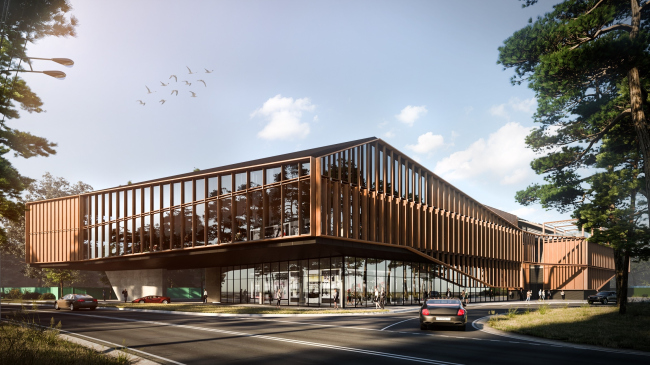 The lamellas leave the façade surface transparent, at the same time setting the rhythm and forming a special dynamic pattern: because of it, the building will be visually changing when viewed from the cars driving down the highway. The façade outlines respond both to the terrain and to the broad turn of the highway. One “ray of light” on the façade repeats the line of the road that is going down, while another follows the profile of the road going upwards. When you are able to catch the “ray” of the road, this looks really beautiful. On the west façade, the architects made the side end wall of the second tier completely made of glass, making use of the well-known modernist device that could be termed as a “television frame” technique. For people who are inside, it looks as if it shows the stream of traffic in motion: you sit in a restaurant, and you watch cars coming up to you from a distant perspective. This design is also reminiscent of Italian “Autogrills”. This technique will be readable both from the outside and from the car windows as well. The lamellas will be made not from wood but either from corten steel or from some HLP wood-imitating material. The shapes of the elongated buildings clearly display the fashionable modernist plastique in the vein of a Moebius strip, at the same time showing allusions to the Soviet movie theaters with their inevitable cantilevered structure overhanging above the glass. The lamellas make It possible to achieve this effect as well – they are generally a great tool for shape molding, in spite of the fact that behind them remains a transparent glass surface that reflects the pine trees with their vertical rhythm, mixed with the verticals of the lamellas. This way, it turns out that the building, on the one hand, has a bold shape, and, on the other hand, it is almost dissolved in its natural surroundings. In my opinion, it already belongs with the paradigm of the 2010’s – the kind of self-effacing eco-friendly architecture that came to replace the “stunt” architecture of the 2000’s. In this context, the building can be put in the same rank with the Skolkovo University designed by Herzog and de Meuron – a large shape with wooden coating and a hint at gable roofs – as well as with the Yury Grigorian Wooden Theater in the Luxury Village in Barvikha.

When asked about the main idea of the building, Ilia Mashkov replies: “The roof slopes have a lot in common with the tradition of countryside construction, while the natural context dictates a reserved image, that is completely alien to the intention of getting noticed no matter what. What we were after was the variability of the perception of the volume coupled with harmony and integrity”.

On the inside, the architects proposed a structure of narrow two-story market counters. The first floor will host shops selling food, while the second will contain a food court where one will be able to order a dish made from the ingredients that he just bought. Within one floor, there are different levels as well: the architects designed staircases in order to make the most of every square inch of the available floor space. The rigid rhythm of the lamellas is also needed to cover the mottled insides of the building and bring it to one common denominator. The restaurant on the terrace will also command a river view; in fact, the river is not really visible but the feeling of the distance of the land will be there. The mansions, of course, will not be visible from the restaurant.

One can get to the shopping center from the Rublyovo Highway via the perpendicular exit with an extra lane that leads the traffic into the underground parking garage. The garage is designed to accommodate for 100 cars; there are two underground levels; the class of the cars has also been addressed, so, a Bentley can drive through here as well. The entrance group is accentuated but it is almost invisible from the Rublyovo highway. At the point of entrance, the rhythm of the lamellas is broken, and the façade is drawn like a curtain before the visitors. The building is not designed to cater for pedestrians who are just not meant to be there; it is designed to be perceived by motorists. And when you drive down the highway, the “rays” truly catch the eye.

As a result, the architects got a very conextual, yet at the same time noticeable, image: it matches not only the natural surroundings, but also the Rublyovka traditions, which will make it noticed and recognized by the visitors.