The two units of the house on the Dolgorukovskaya Street look like Russian treasure chests, while the brickwork of their walls echoes the belfry of the Saint Nicolas Church in Novaya Sloboda. The project, although small, became the result of thorough analysis of the architectural environment and was selected out of many other options. 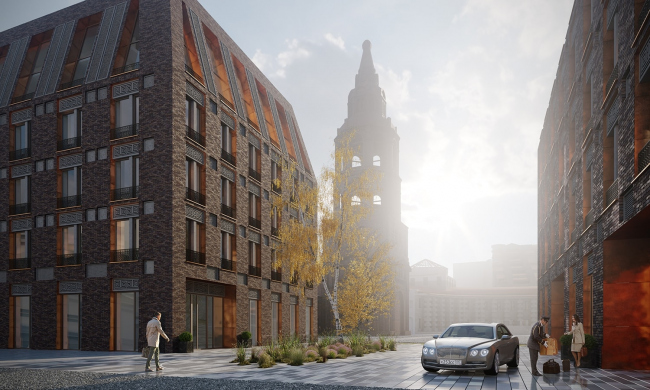 The land site in question is but a miniature one – only 0.32 hectares – and it is located on the second line of the Dolgorukovskaya Street, in an extremely diverse and just as interesting historical environment, north of the Saint Nicolas Church, facing the semicircular square of the Italian Quarter designed by Mikhail Filippov, behind a small park, which is the haunt of the local dog owners. In 1904, the church of the “Naryshkin” architecture of the late XVII century got an additional monastery canteen or “fratery”, as it is sometimes called, and a belfry designed in a neo-Russian style on the verge of eclectics and art nouveau. The church functioned until the 1930’s when it was handed over to the Museum of Atheism (sic!), and then was taken down altogether to be replaced by the building of the soviet cartoon production company Soyuzmultfilm that turned out to be quite a decent monument of postconstructivism; in 2018 it was handed back over to the church community. Today, this architectural ensemble looks a little bit strange, just as many of the results of soviet intrusions into church complexes, yet at the same time very romantic, chiefly thanks to the belfry of dark brown bricks covered with hundred-year-old patina; it may look like gothic to a layperson, even though, of course, in the beginning of the XX century the architects Voskresensky and Kurdyukov drew inspiration from prototypes belonging to the late XVII century. What is more important, however, is the fact that the belfry definitely “holds together” the city space around it. The architectural monuments and landmarks of the area © APEX project bureau

All around the place, everything is organized just as much in the “Moscow” fashion. The church and the territory to the north of it belonged to Soyuzmultfilm and was occupied by small-scale structures of varying time of construction and varying degree of dilapidation. Most of them will be torn down for the sole exception of a small three-window wooden house built in 1821 and overlooking the Dolgorukovskaya Street – it boasts the status of a “rediscovered heritage site”. In fact, the buildings of the new club house will occupy the territory of a town manor estate of the Councilor of State Andrey Aleksandrovich Petrovo-Sokolovo, who built this house; in the middle of the XIX century, there was a small pond here, and in 1880 a factory was built. Soyuzmultfilm was using this house as a darkroom but in 2004 half of the solid wood construction collapsed, and, according to the architects, the best way to save the situation was reassembling the house on a newly-built foundation. 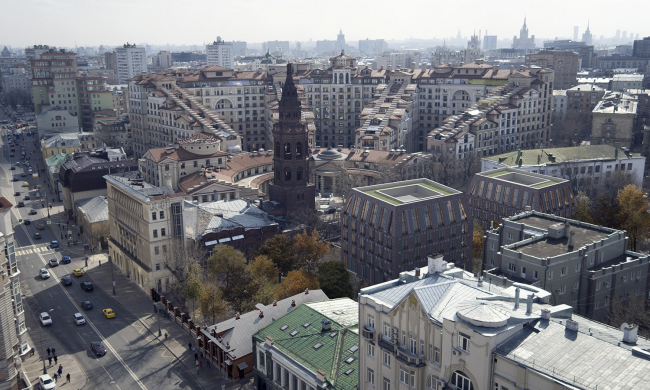 Back to the surroundings of the buildings, though! The nearest neighbor of the Petrovo-Sokolovo estate, the house that used to belong to the Prussian subject August Sibert is an early, of 1891, work by Roman Klein, the master of neo-Greek, the author of the Pushkin State Museum of Fine Arts and the TSUM department store; the house was slightly tainted by later remodeling, but still this proximity is more than obliging. There is still another – counting from the city center – tenement house that used to belong to “Fischer Society”, an example of Neogothic of the 1910’s. Across the street, there are Brezhnev and Luzhkov giants. Therefore, the miniature land plot in question is surrounded by every conceivable type of Moscow construction. And, accordingly, the authors had to take into account what diverse neighbors the future house would have – but more importantly, they had think about what kind of background the new housing project would present for the house of 1821, and the neighboring house designed by Roman Klein. Considering the level of responsibility, the small size of the land site and the height restriction of 23 meters, the architects decided to design the complex very carefully, molding the future buildings step by step – showing different options to the client, discarding and improving their versions. What they ultimately got was a total of nine options, all rather different – with a cantilevered structure of a hovering “city villa”, with a pointed avant-garde nose, with a modern façade of respectable-looking vertical windows, or with a long “protuberance” that looked like a curious “head” peeking between the Sokolov Estate and the Saint Nicolas church. The architects and their client also considered elongated volumes, zigzagged and with an inner yard, and bio-shaped nonlinear ones looking like an armadillo. 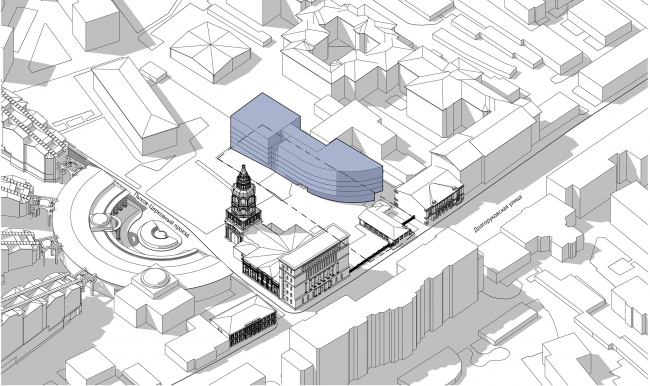 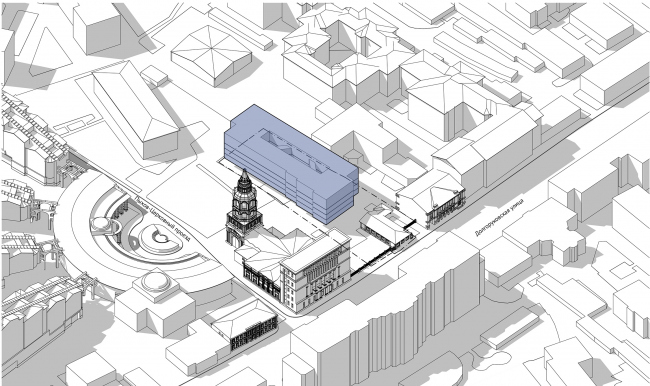 The reference point – we’ll stress it again – were the same for all of the options; the authors carefully studied the surroundings both in terms of architectural reference points and in terms of the possible views both views of the house and views from the house, literally trying to get as much as possible information to be processed in the project. The architects even did a retrospective research of the local housing construction of the XX and XIX centuries (sic!), getting very curious results and city plans. They even remembered the Pimen Church and the shopping arcades, which once were there on the Miusskaya Square. There was quite a lot of meticulous work done, in short. Dolgorukovskaya, 25. Map of the development of the area in the XIX century © APEX project bureau Dolgorukovskaya, 25. Map of the development of the area in the XX century © APEX project bureau Dolgorukovskaya, 25. Map of the development of the area in the XXI century © APEX project bureau

The main results look as follows: the most interesting neighbor is the belfry of the Saint Nicolas Church – back in the day it was also grasped by Mikhail Filippov who concentrated his whole huge housing complex around it, thus highlighting the brick tower yet again. Next – the two nearest neighbors are really miniature ones, and what pre-Brezhnev construction was there, was pretty much in the same “Moscow” scale. The tenement house of the Fischer Society is larger – but it still demonstrates the human-proportional yard rhythm. And, last but not least, one of the main problems was a building with a ceramic granite façade adjoining the north border of the land site, or, rather, its deep projection, stepping up right to the border; currently, the building hosts a bank.

The architects had to “step back” from this projection, and in this side a small yard appeared that the architects actually turned into a courtyard or a “court of honor”, as it is also called, the inevitable attribute of castles as palaces, both French and Palladian. Settling on one option out of nine was made easier by the analogies with the belfry, the “merchant Moscow”, and Paris: ultimately the architects got two compact rectangular buildings of similar parameters standing at a right angle to each other. Between them, there is a yard that steps back from the “bank” projection; it is continued southward by a path that leads to the Pykhov Lane and the belfry. Underneath the yard, and underneath the whole construction blueprint, for that matter, there are two levels of an underground parking garage. Closer to the yard and the projection of the “northern neighbor”, there are entrance lobbies grouped on the bottom floors. The bottom floors are meant to be public ones; in the western building (which was placed in the depth of the territory), the ground floor, in addition to the entrance lobby, is also occupied by the office of the management company, while the eastern building will also have a cafe in it. It is extended by amphitheater stairs that descend into the yard and separate the space of the residential complex from the street noise. Plan of the 1st floor at the 0.00 mark © APEX project bureau

The apartments on floors from 2 to 4 have three rooms in them, ranging from 39 to 78 square meters. Higher up, the architects designed two-level penthouses – these flank the center along the building’s perimeter and conceal the protrusions of the mechanical rooms (the authors claim that it’s imperative that the technical equipment remain invisible). The outside walls of the penthouses are tilted inwards; the likeness with the mansard – the “Parisian” part of the buildings’ image – is strengthened by decorative “shutters” made from glass fiber reinforced concrete; they also go a long way to help the top part of the building look like a single integral volume. The slanting silhouette gave the house an unmistakable likeness to an ancient Russian treasure chest, the kind that can be seen in local history and lore museums, and this likeness pleased the authors because it is resonant with the “petty bourgeoisie” Moscow and their search for the historical context – what it ended up happening is something like “the return of the merchant city”, not in the form of one of the single-story or double-story mansions that used to be abundant here but indirectly, through the image of a single thing scaled up to the size of a house, as is the custom nowadays. 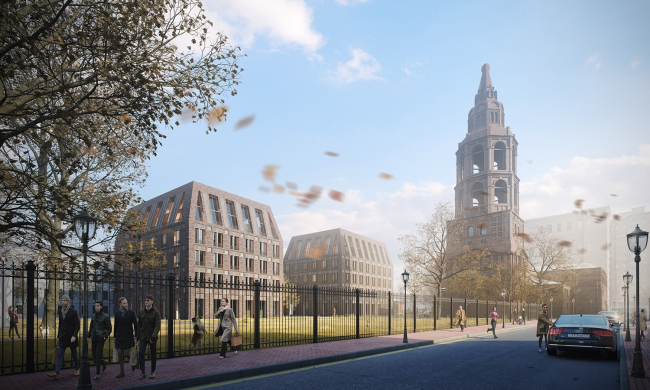 As for the likeness to the main accent – the belfry – it is highlighted by the brick decoration. The architects opted for solid-body hand-molded bricks, seamless, with a cutaway at the edges that enhances the ribs of the joints. The authors stress that its use was necessary for achieving the desired effect – the purpose was, of course, not only to inscribe the two buildings into the context but also to highlight their “preciousness” through their relationship with the most interesting building amongst the surroundings. By the way, stressing the “preciousness” of the house, the interior design, proposed by the architects, uses a golden hue, which is echoed by the window jambs made of copper imitation panels; it looks as if the golden glow of the treasure slightly leaks out from the inside, casting a copper reflex. By the way, between the first and the second section of the belfry, there is a height difference, a “leap” that is basically typical for Naryshkin silhouettes – it also echoes the mansard slant of the buildings. Now, however, the architects have a new reason to worry: work has begun on renovating the Saint Nicolas Church, and what if the belfry gets stuccoed all over? But then again, one must say that this fear is groundless – its façades have always been pure brick, and no one in their right mind would permit to use stucco here. The brickwork is diluted with ornamental insets: floral ones that look like diamond rings of the medieval treasure chests and meander that serves as an homage to the neighboring Klein. The end result slightly resembles the Igumnov house. The outlines of the “treasure chest” buildings are slightly squatting because of the height restrictions and the “tower” typology with a communication nucleus in the middle of the volume – this is something that the authors of the project admit themselves. On the one hand, such shape is perfect for “treasure chests”, and, on the other hand, the architects did everything they could to fight the squatting appearance of their creation: they removed almost all the horizontal dividing lines, for the sole exception of the meanders, and slightly raised the overall height.

To cut a long story short, the construction has already begun, and by 2019 the Dolgorukovskaya Street must get two “treasure chests”, whose unusual silhouettes will add extra diversity to this city.