This building is like a huge crystal which is developing under the inner rules set by the module of its crystal structure. This allows it react quickly on all the restrictions of location, not changing and not losing its crystal appearance

Office building on Sadovoe ring nearby the Kursk railway station was developed for tax inspectorate and tax police, but while they were designing the project, tax police was dissolved. The northern half of the building transformed into rented office area – a business centre Citydel, and the southern part remained in charge of the tax inspectorate.

It has grown on the place of a 1storey piece of glass of 1970’s – a gap in the raw of front building development. To the left there is a 4storeyed old commercial apartment building house of 19th century, and to the right there are a few houses of Stalin period, which in their time were built here in order to enlarge the scale of Sadovoe ring, transforming it from a petty-bourgeois (see that house) into heroic. There was hardly enough material for heroic scale in those days, it becomes obvious when you look at the end face of a Stalin house – it hardly bears its top. But today there are plenty of materials – and an architect is supposed to create not a screen for a prospect but a lot of square meters. And there is a reverse situation now. They limit the building – leveling the heights, making it fit the historical neighbors – and yet it keeps growing, it has nothing to do with that.

The building is huge. It can’t be denied, thought to hide its real size there were applied almost all methods known in Moscow practice – alignment of tops at height of the nearby buildings, rhythmic repetitions, glass surfaces reflecting the sky; stepwise increase of the height towards the depth of the site and stepwise cutting of too much extended volumes. There also seem to be some magic used – because from afar the building looks no larger than its neighbors and even bents along the line of Sadovoe ring. When you come closer – the facade is straight and the volume is quickly putting forward, growing up right away. The author – Vladimir Plotkin, is sure “here have been done too many bows in different directions”.

But despite the "bows" the building retained its image. The author’s style can be easily identified, and it seems to me, the method here made it possible to save the building’s individual features regardless all the requirements and restrictions. Probably it has turned so because Vladimir Plotkin's buildings grow like crystals. They have a basis, or rather a module maybe, responsible for each cell’s form and the way they get connected. Following the rule, these cells unite and grow forming larger structures.

Such approach to construction of architectural canvas has compound consequences – it means severity and structure, at that deeply internal, growing from the “crystal grid”. On the other hand, this crystal grid paradoxically gives the construction almost infinite freedom of transformation and growth. The structure, supported by its rule-module, then is able to grow practically any way, reacting the environment. In other words, the building having many inner rules, appears to be less held down by external frameworks, than its neighbors which lack this immanent crystal structure. It seems to be not so afraid of restrictions – it is growing over them and becomes what it wanted to be. So the building can grow and reduce, can narrowed and extend. Can break up, letting the underground collector of small river Chernogryazki pass and can merge into a massive volume around the well of inner yard. And it is even able to form another one within, half open yard like a street.

The building has two kinds of facade planes. First are covered with wide white-glass strips joint by the lines of horizontal windows. Despite the sterility of "paper" white color, these planes are more material and extend where there is needed some impenetrable "serious" façade: on Sadovoe ring where they form the “front” volume, on the sides of the mentioned inner street and on the back part turned to the railway.

The second kind of surfaces is the glass. They lined with horizontals as well, but thin and grayish of glass color. These planes form caesuras, hollows and – precisely measured reflections, working as mirrors. Contrast white-glass strips are well reflected, continuing their lines in glass mirrors – this makes the hollows look deeper, and the massive of the building look more cut up, than it really is (and that also lessens the volume’s size).

Especially clearly this method is seen in the inner "street" between the two constructions – its deadlock end face is glass and mirror, it reflects strips and the street looks longer. So the building is reflecting not only the sky (we all have got used it) and not only surrounding constructions (nothing new) but it reflects itself, creating some intrigue within itself that adds some asymmetric play of rectangulars, hollows and ledges.

Stripes and reflections are not only in the appearance of this building, but in its interiors, in particular, in halls of main company-tenant "Citydel”. The strips are softer here, because they are colorful and glowing, but their rhythm is the same, and it is also repeated in a shiny plane of the polished floor, creating under a kind of "antiworld", very soft though. 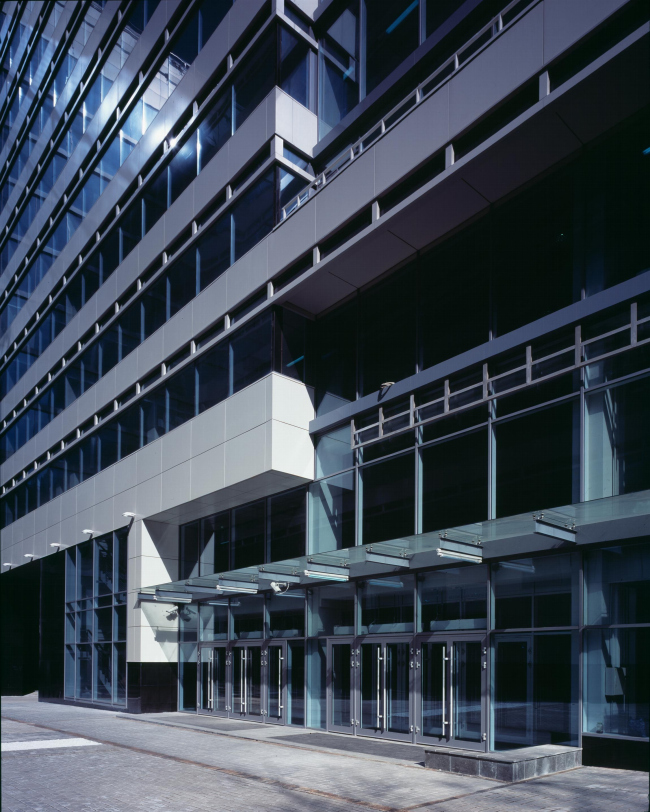 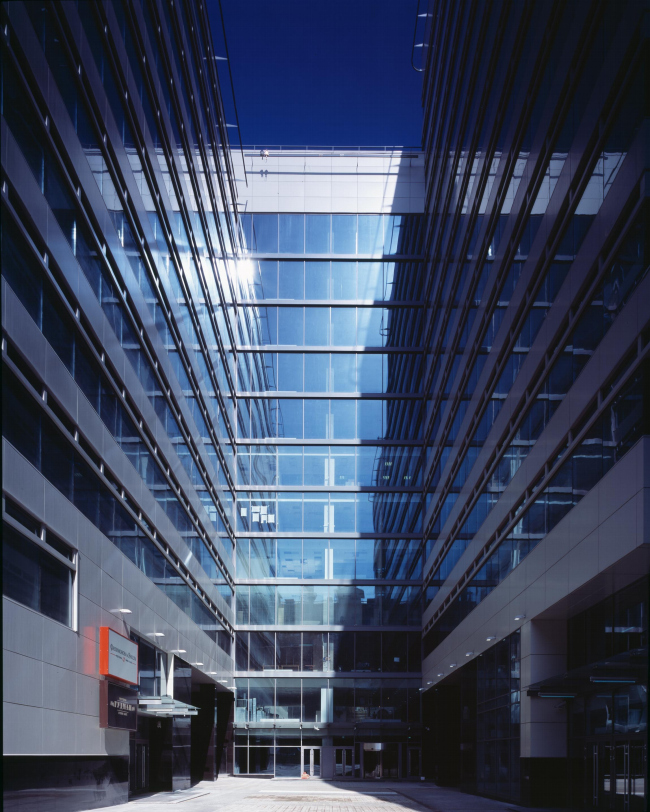 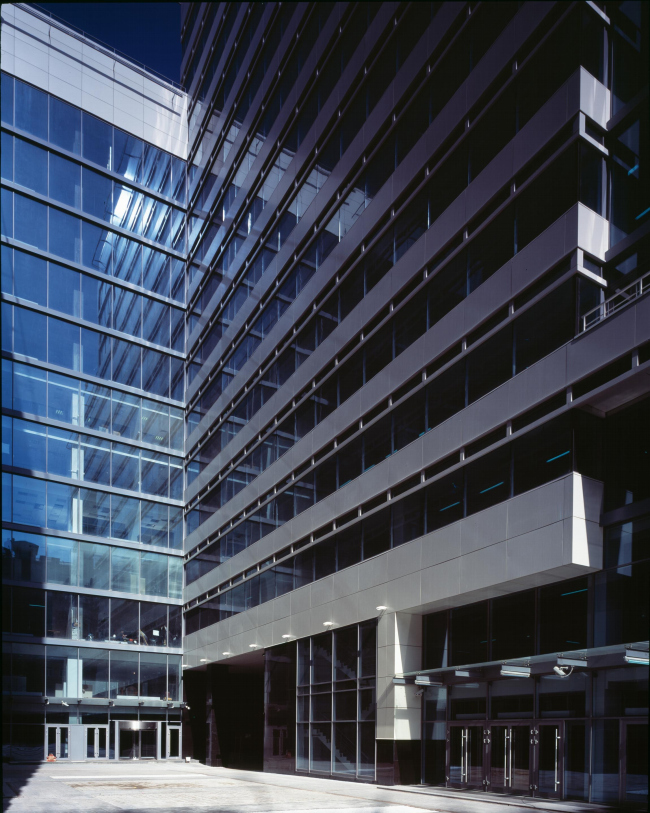