Oleg Carlson: “After I watched the Hugh Laurie TV series I realized that I am also a doctor, only I treat houses instead of people”

The architect is speaking about his Facebook project in which he shares about frequent cases of “healing” private residences designed with mistakes of various degrees of severity. A country residence is a special architectural genre, which, as life shows, is something that not all of the architects can successfully master. A lot of country houses require major adjustments, they need therapy, and sometimes even surgery. Oleg Carlson has come up with an Internet project #ДокторHouse: the materials of the country residence projects that he cured are posted online in a “before-and-after” format on his Facebook page and the page of “ASB Carlson and K”.

How did your “Doctor House” story begin?

Surfing the Internet on long winter evenings, you can find lots of different things, including information about designing country houses. My colleagues post online their floor plans, the developers advertise their projects of country houses, and so on. And sometimes designers come with the project complaining about the fact that they do not understand how to do the interior design for the floor plan that was just thrust upon them.

Regretfully, most of houses built by such projects are subject to major reconstruction or even demolition. However, while the house is not yet in construction, it is not too late to put things right. And sometimes you just examine such a project, then you grab your pencil and start correcting the obvious limitations of the house planning. Or sometimes you just take the geo basis, the house plans, and make over the entire project – let’s say, revert the axis or apply the modular design principle.

This is how I started this “before and after” page on Facebook, where we posted the materials of the original and the revised projects, getting in touch with the authors in order to share our experience, to prove our solutions right, and to teach them the principles of architectural design.

And after I watched the Hugh Laurie TV series I realized that I am also a doctor, only I treat houses instead of people. House, M.D. has been out for thirty seasons (well, here we might want to ask Oleg what exactly he considers to be a “season”). Each year we “cure” from 20 to 30 projects. We have a goal of correcting the limitations of the project before the construction begins, thus saving the client’s time, money, and the customer's nervous system. 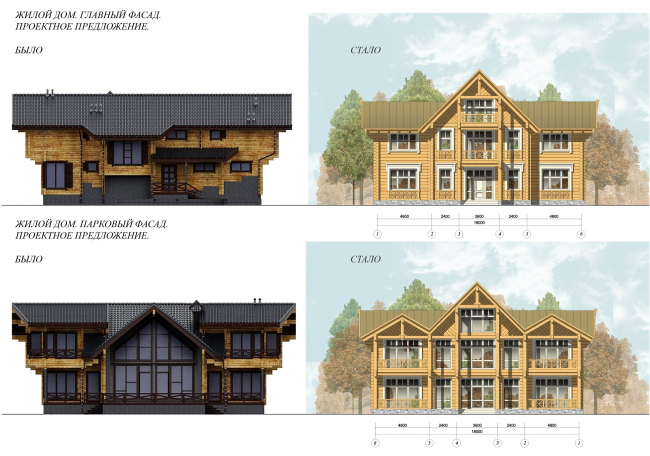 The facades of a country house: before and after © ASB Carlson & K

Plan of the 1st floor: before and after © ASB Carlson & K

Plan of the 2nd floor: before and after © ASB Carlson & K

What are the main limitations of the projects that you undertake to make over?

The most common mistake is when you have a large total area and lots of useless premises in the house: corridors, some transient zones that are not included in the scenario of the life of the house, gigantic furnace rooms, and such like. Now add to this inconvenient and unsafe stairways – steep or narrow or dark – and incompetently designed bathrooms. A separate subject is the second-level space. You just cannot have second-level space in houses under 300 square meters because it steals the useful floor space from the bedroom. Say, why would you ever want to move from a cramped city apartment into a house of your own with bedrooms 10-12 square meters?

This is what goes on on the inside. On the outside, it is mostly open balconies and entrance groups that get piled up with snow, and flat roofs that start leaking every spring requiring some major repairs.

Once I was invited by the “Idealny Renont” (“Perfect Remodeling”) TV show on Channel 1 to the house of Sergey Yursky and his wife Natalia Tenyakova. This is where I had the complete set of designing mistakes! Starting from the wrong orientation of the house on the land site, which resulted in the fact that the house was turned to the plot with its rear façade, and the bedroom windows were stopped dead by the fences. There was yet another curious thing that was left off-screen in the TV show: how, with a bedroom on the second floor, the house got an extra outlaw bathroom, and how the stairway was made over in such a way that now the only way to climb it without running the risk of breaking your neck was doing it in groups holding each other’s hands.

What do you think is the cause of such unsuccessful projects?

Our architects are underpaid by their clients. Oftentimes, even very rich people look to pay for their project as little as possible, inviting “architects” who agree to design a house for 10 euros per square meter. So they end up getting what they later on take to us for a fix.

The quality of the project is not guaranteed by the client’s readiness to pay, either. I have had to make follow-up corrections in the projects done by an American firm that designed a house in the Wright style.

Wright houses are all about iron logic based on the modular design principle. But this logic has yet to be adapted to our climatic conditions, starting from organizing the tambour, which is nonexistent in Wright’s projects.

Another reason for these stupid mistakes – and this is something that I totally disagree with – is the belief of some of my colleagues that “the customer is always right”. The client comes to an architect assuming that he is a professional. The architect’s task is to ask his client lots of questions about how he sees his or her house, what kind of family they have, what their lifestyle is, hear the client out, and then propose his own solution, convincing, if necessary, the client of its advantages. The client’s will is no excuse for a bad project.

And what can you say about your own clients? Their wealth and social status alone must be enough of a reason to be intimidated to disagree with them, are they not?

As time goes by, you also develop your own authority, and when really rich clients come to you, they realize that they are coming to an acclaimed professional. These clients know how important it is to listen to the professional opinion. Villa "Svetlana": before and after © ASB Carlson & K 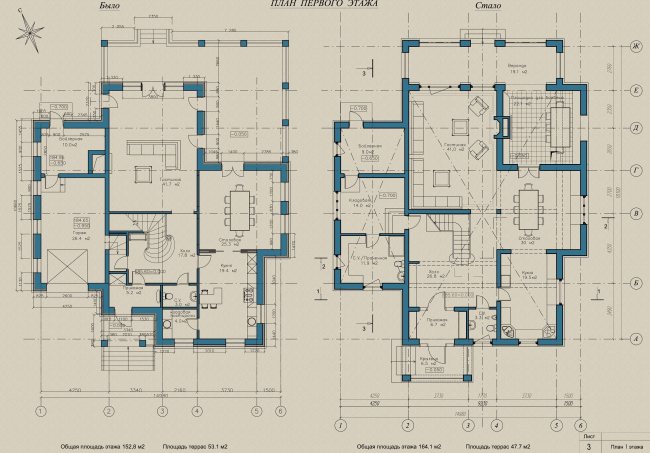 Villa "Svetlana", plan of the first floor: before and after © ASB Carlson & K 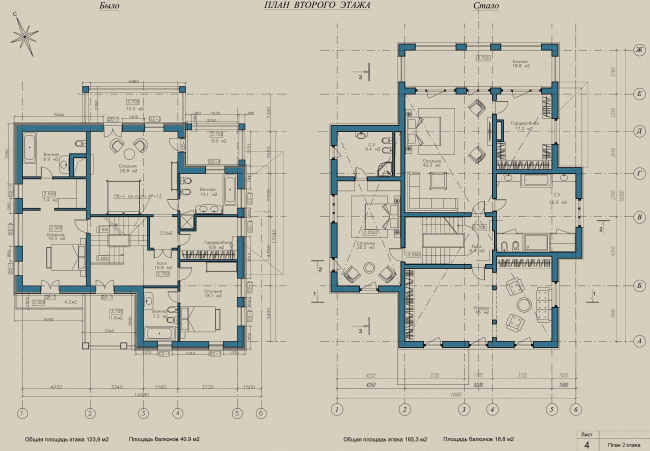 Villa "Svetlana", plan of the second floor: before and after © ASB Carlson & K

Could you say that all of the Russian clients prefer some specific style?

Classical houses are definitely more popular in this country because classics is something that our clients understand and are used to. The main problem is that oftentimes you have a land plot of about 30-40 hundred square meters, and the client wants to build on it a manor house or even a palace, oblivious of the fact that a palace, whatever kind it is, presupposes lots of space around it.

It’s not often that the clients come to me asking to design a house in modern style. In order to want to build a “modern” house, you need to have lived in a classical one for a while. The client must get ripe for the modern architecture, learn to appreciate the beauty of its shapes, technologies, and materials. So, most of the time we play classics.

Let’s take our settlement “Sokol” for example – the houses that were built here in the very beginning. Some will say that this is a boring and dull kind of architecture. But in reality, everything was done there in a beautiful, competent, and grand-scale manner. The facades of a country house: before and after © ASB Carlson & K Floor plan: before and after © ASB Carlson & K What kind of advice would you give to those who only begins to design houses on their own? How do you learn to make great projects?

Back in the day, you could only get information from specialized magazines, and those were few and far between. At the university, we could only get them with written acknowledgement of receipt. Today you have the Internet that shows you all the expertise that is out there. Just go for it, take it and use it but don’t forget to use your head as well. Again, because of the Internet, the same mistakes keep popping up in many different projects over and over again. And, again, there are lots of great projects out there – you don’t really have to design anything, everything was designed before you.

Also, you need to learn to explain to your client the benefits of professional architectural solutions, and then you are going to end up getting more great projects to be ultimately proud of.

The Internet is more and more becoming the leading educational resource. Do you plan to further develop your “Doctor House” project?

We also have plans for launching our YouTube channel in the nearest future. We are already posting videos online in which I share about the subtleties of making a floor plan for a private residence. We will be posting a new video every two weeks: sharing about our new projects as they are “on paper” and about our visits to our clients. So, we are planning to continue sharing our experience and we hope that in the future Doctor House will not only treat houses but also teach people.