A most interesting idea of a pilot renovation project developed by Ostozhenka and the Institute for Urban Economics consists in building underground parking garages combined with soil drains. In addition, the project is all about preserving the valuable land assets combined with the city getting a new large-scale street and a few minor ones as well.

In this issue, we are continuing to share about the works submitted for the competition of pilot territory renovation projects. What makes the district of Vernadskogo Avenue different, stuck, like on a thumb pick, on the metro station of the same name, is the prestigious status, characteristic of most areas of Moscow’s southwest combined at the same time with insufficient cohesiveness. The main task that the Ostozhenka architects set for themselves in their pilot renovation project was joining the new construction sites, currently chaotically scattered, together, and livening up the internal life of the area. 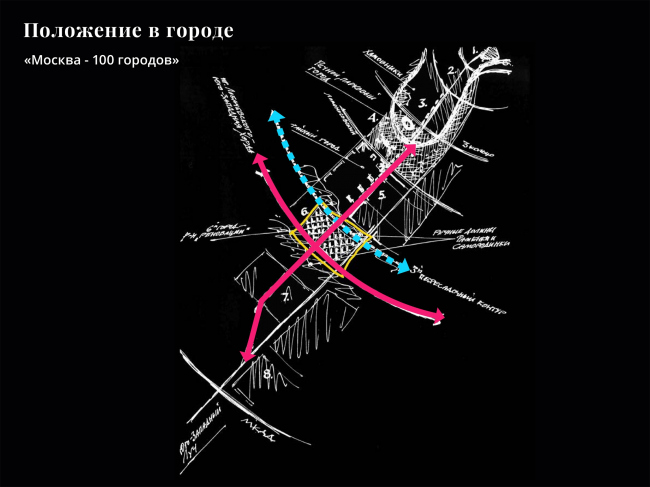 “We do not destroy the existing vegetation – we only add to it. The green spaces between the buildings became a peculiar token for us: they are like a clock’s hands counting time – Andrew Gnezdilov says – the new houses fit in almost perfectly with the existing planning structure without destroying the vegetation in between them. And it must be noted that the planning pattern of the 1960’s is vital to this day: arranging the houses from north to south is convenient for the construction because it answers today’s insolation norms”. As for the “string” or “horizontal row” construction principle, the architects do change it: in the depth of the neighborhood, buildings of relatively moderate height (up to 8 floors) form semi-closed urban blocks, while near the future transport interchange hub, next to the metro station and near the Vernadskogo Avenue the architects form the blocks that consist of high-rise towers. This way, they accentuate the meaningful points and support the visual correlation with the existing surroundings – housing complexes of the 2000’s.

In order to tie the existing recreations into a single system, the architects add overland pedestrian crossings of the Vernadskogo Avenue in the vital points, proposing to synchronize the mode of the existing traffic lights – one will be able to cross the avenue by a pedestrian crossing, even if somewhat remote from the set of traffic lights, while the cars remain standing, and the traffic will remain unhindered as well because the authors do not propose to build new lights, attaching their crossings to the already existing ones; one must admit that this is a very subtle solution indeed. The renovation platform "Vernadskogo Avenue". The principle of construction © Ostozhenka One of the interesting features of the Ostozhenka project that caused much controversy at the exhibition held in the “House on Brestskaya” is the fact that the district is getting a new main street that literally grows from the Borovskoe Highway and other “desire paths”, already mastered by the local residents but in no way attached in terms of urban planning.

The highway only coincides with a no-name fragment of the new main street near Moscow State Institute of International Relations. Then, near the triangular square, the street turns right towards the center of the business activity – the metro station and the future transport interchange hub, where the project has office towers in it, resonant, in terms of proportion, to the construction of the late 2000’s on the peripheral part of the territory.

The street gets a zigzagging and winding contour with a few green branches but it is obvious that the main rod connects the metro station and the Moscow State Institute of International Relations, thus coinciding with the path that has already been tread upon but has not been organized and landscaped yet. This path runs past a few schools and medical centers; according to the project, their public zones must be widened. This way, these public zones will find themselves not deep inside the city blocks but on the axis of the city activity. The continuation of the main street – which runs beyond the pedestrian crossing of the avenue – coincides with what is today the Ulitsa Semenova-Tyan-Shanskogo. What is still more interesting is the fact that as far as the Ulitsa Semenova-Tyan-Shanskogo and Designed Drive 6640 are concerned, the architects are proposing to tie them from the inside by an automobile drive, which will cross the Vernadskogo Avenue – this way, the place gets on the inside a full-fledged street of district importance, which will connect the two parts of this area. This part of the street runs exactly by the water parting line. 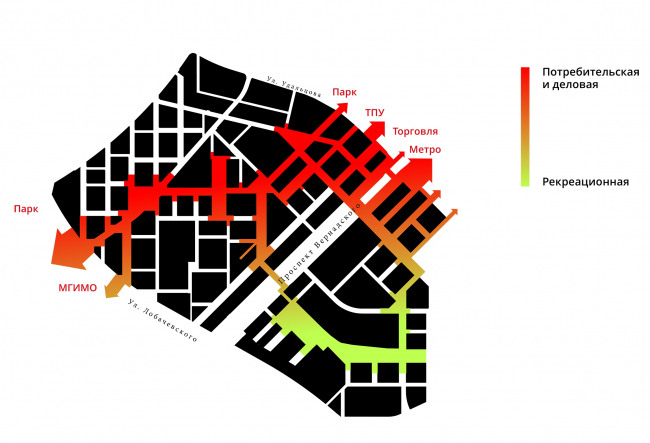 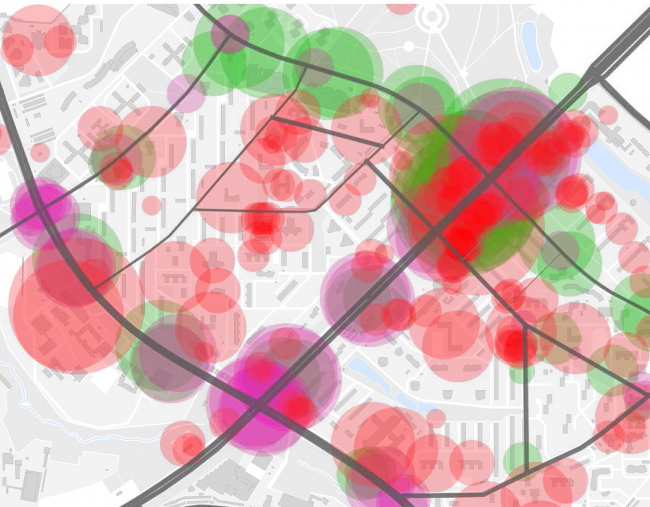 The renovation platform "Vernadskogo Avenue". The urban activities. The most visited places © Ostozhenka 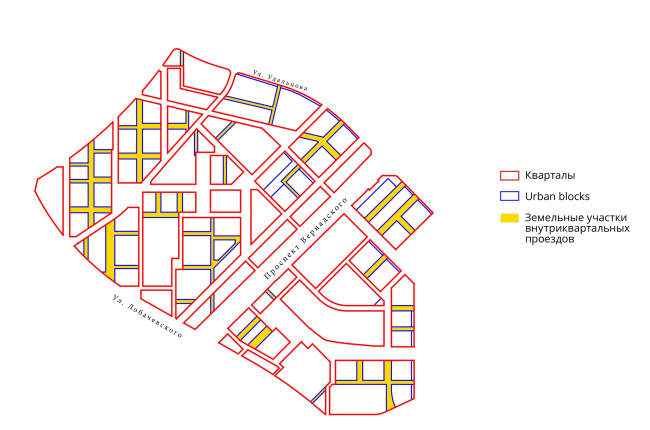 The main street is only part of the framework that the architects are proposing to build. Its second part is a system of the parks and ponds in its southeast part, which require a certain amount of landscaping work.

Their recreational semicircle locks on with the new city axis running through in-block passages at the end of the Ulitsa Semenova-Tyan-Shanskogo; on the other side it locks on with the new crossing over the avenue behind the string of ponds. The map clearly shows how the business function smoothly changes into the recreational one – they became the mutually penetrating halves of a single ring, whose purpose is to unite the two parts of the district.

As for the embellishments of the main “tree” of the street and the parks, these will be the in-block drives, which are much more numerous in the new construction plans, just as the revised paths and shortcuts, some of which become pedestrian-only, and some, on the contrary, take on more automobile importance. The main catalyst, however, is still the marked transport arteries.

“This looks very much like amelioration. If you take a swamp, the water is motionless in it – Andrew Gnezdilov comments on his project – What we do is create a channel, and then motion begins. We see our task in creating prerequisites for the qualitative changes. We also see the potential that this street has both in terms of commerce and as a driving force for developing a decent social life”. Thanks to this solution, the urban activities, which hitherto predominantly existed in the periphery of the district, are logically carried over to its center, and the district is “turned inside out”: along the pedestrians’ pathway unfolds infrastructure – social, commercial, and the kind that is meant to fill the route with impressions. As far as the city blocks of the Vernadskogo Avenue are concerned, the problem of parking is particularly acute here. Answering this challenge, the Ostozhenka architects are proposing to place underground parking garages not in the basements of the buildings (which oftentimes complicated planning solutions due to the fact that the bearing columns in the basement have a space grid of their own) but underneath streets and alleys. The feasibility of using the streets to this purpose was calculated by the Institute for Urban Economics.

For years, Ostozhenka has been consistently guided by many of the principles outlined in this article in many of its projects, implementation get them both in Moscow and all across the nation. What’s remarkable is the fact that the 3D visualizations submitted by the office were notable for their conditional landscapes, while the other contestants were much after photographic realism. Although the façades of the volumes are but sketchily marked, the district in these pictures really came alive thanks to the shop signs and people that populated it. This is essentially what the company’s main principle is all about – when it does a renovation project it first of all cares about the environment, and not this or that specific building. “Life is smarter than we are – it is difficult to predict its exact scenario; we only create the basis for the qualitative changes – Andrew Gnezdilov explains – this is why we depicted those who will ultimately change this environment, the residents of this area who are the full-fledged stakeholders of this process”.