​Vladimir Plotkin: “We wanted to bring the park closer to the river”.

A small conversation about an architectural idea and its realization. 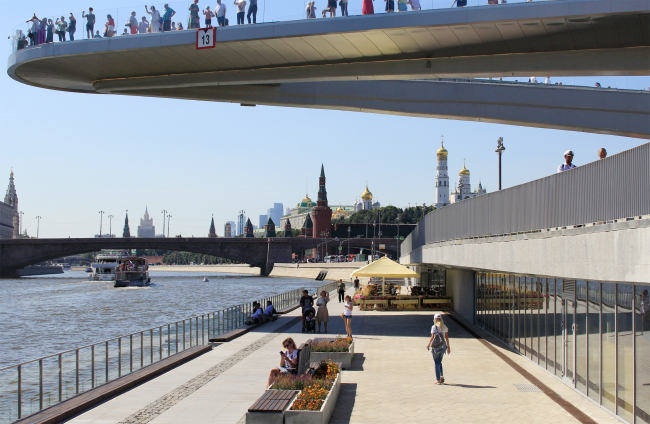 The Zaryadye Park opened in September a year ago, survived the autumn crash test, then the winter, and its first summer as well. One of the interesting scenarios of the park is the embankment of the Moskva River where a quay was set up and where cafés are now open: getting to it through an underpass, you immediately find yourself very close to the water, almost on a level with it; besides, judging by the behavior of the visitors of the park, this place is a welcome alternative to the hovering bridge as a selfie spot. Up high on the hovering bridge you look as if you were flying over the Kremlin, and here you are almost floating on the water. The bridge draws crowds, and this place is usually only graced by single individuals but they inevitably come here, even in winter. 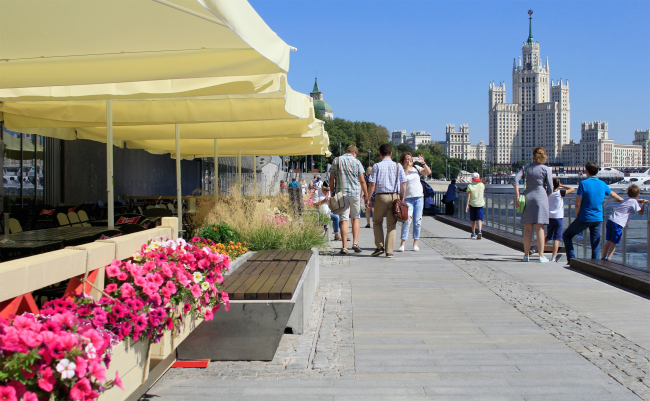 Like it was said, this place is accessed by an underpass inherited from the Soviet times and since refurbished, as well as by two staircases cascading down here from the embankment. In July, a café opened here, although people seem to prefer to sit on the bench facing the water and the last “sunken-in” step almost on a level with it, chewing on the sandwiches that they brought along. The water is fenced off by a glass partition, and if we are to expect the picture that seems to be pretty much standard in Venice, and is to be seen in Lion or Rome on the lower embankments – well, it doesn’t look very probable that we will see such picture in Moscow any time soon. Well, this glass fence was made with the best intentions and for safety reasons anyway. 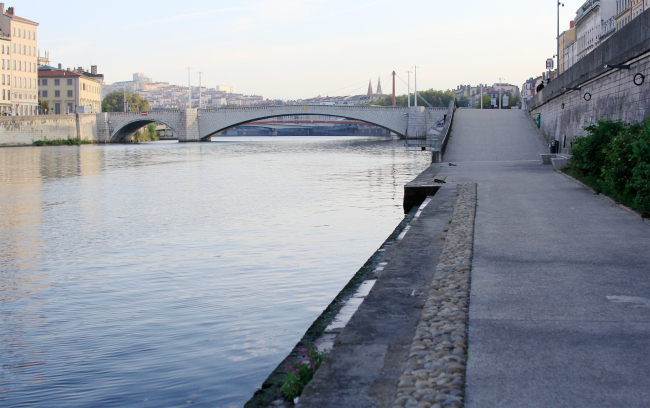 Meanwhile, it must be noted that this lower embankment is the first one to be ever implemented in Moscow after the idea had long been talked about: the very idea of going for walks and “getting in touch” with the water was voiced and pictured many times in various projects, while the implementations of this idea were slow to come. Counting the “Olive Beach” in the Gorky Park designed by Wowhaus, this is arguably the second instance, and, considering the fact that this place got a quay of its own, a more impressive one. Oh, and by the way, the instance is the embankment of the River Park housing complex that opened in May. The embankment is a part of the idea from the competition project by Vladimir Plotkin and TPO “Reserve” that was included in the park designed by DS+R only to be “transformed by circumstances” but still staying there. We talked about the story of its appearance with Vladimir Plotkin.

Archi.ru:
The embankment was an important part of your competition project that won the second place in 2014, wasn’t it?

Vladimir Plotkin:
The task of tying the park with the river and the water was part of the competition brief. We proposed to do that by replacing the narrow underpass running under the traffic way of the embankment by a broad passage – essentially, to lower the park down to the water level letting it go out to the river in terms of space. We wanted to do that in such a way that from the river, through the passage (which we expanded by about 10-15 times, from 30 to 50 meters in different versions of the project) bits of vegetation would be seen, and the park would smoothly descend down to the river, splashing out to the water. I think it was this specific idea that brought us the second place, they offered us to adapt it to the winning project, and we worked a lot with our American colleagues on the adaptation of our embankment idea. Why weren’t you able to make that broad passage in the long run?

In the course of the design process, we ran into two very expensive utility lines running to this side of the river: one part stopped us from making the ramps that we designed as cascading down from the pavements of the upper embankment, and we had to replace them with staircases on both sides. And the other block it the utility lines turned out to be running closer to the passage, and it stopped us from being able to make it significantly wider.

From what I see, this project, although small, was a hard one to develop.

You don’t have a clue! Many times we had to redo the whole project, fine-tuning it sometimes to the technical requirements and sometimes to the suddenly changing circumstances. Even the project of the traffic way was redone several times; there were ideas for making two lanes instead of three running on the direction of Kotelniki, then carry it over closer to the park, then make it narrower... Ultimately, we only elevated it a little, which allowed us to raise the ceiling by about thirty centimeters in the cafés, which are turned to the lower embankment – in the process of design we were able to inscribe these cafés into the slope.

Will it be possible for ships to moor?

We set up a full-fledged quay, and, yes, it’s possible to moor. However, it must be borne in mind that in this place the fairway of the Moskva River is the narrowest, and we don’t know if the regular river boats will stop here or some different kind of craft, and these only occasionally.

The idea of the archaeological museum was also proposed by you?

Not quite by us. In the competition project, we made a supposition that in the beginning of the underpass some remnants of the China Town Wall would be found – it’s an obvious thing, really, because it was only dismantled, not dug out, you don’t have to be a visionary to predict that. Our project only provided for exposing the remains of the wall – let’s say, you make an opening on top for people to peek in, or make an opening on a level with the underpass... Just as the case is with the Kitai-Gorod metro station, only on a greater scale. When developed, this idea grew into a full-fledged museum of this kind.