Demographic crisis in Moscow gradually goes down, being directly dependent on prosperity. But nursery schools cannot pass the crisis, though on suburbs they are being built and reconstructed actively enough. This spring is the turn of the city’s centre. On order of Moscow department of education and personally of the mayor, the chief architect of Moscow invited the famous Moscow architects and offered to develop projects of reconstruction (or full replacement) of twenty nursery schools in the area of Sadovoe Koltso. So, the client is Moskomarchitectura itself. Dmitry Aleksandrov got three projects.

Most of these nursery schools were constructed in 1950-1960’s and they were quite advanced for those times. But those children for whom they were constructed, today they get there their own grandsons, but construction are too old, moreover, there are twice more children there now than it must be. The last set the main task for the architects – they must offer such solution when capacity of these nursery schools would grow at least twice, and also would maximally use the nearby territory for arrangement of playgrounds.

Architects were very careful with the existing buildings, and also to the trees around them, city landscape and – what is important – to requires of the nursery school themselves. Before the architects started work over the project they talked to directors and found out their wishes. As a result there was general idea for three projects a plan. One of main features is a spatial division of children's groups for temporary stay (without bedrooms) and for full-time stay (bedrooms are required). Groups are divided, but between them there is a connecting part – common territory with a dining room, play rooms, gyms and a pool.

In the project of nursery school in the yard in Bolshaya Gruzinsakaya street architects tried to turn the building into a “park pavilion” – maximally green the area. Around the building there will be three walking territories for different types of groups, each in front of its construction. For groups of part-time stay the architects suggested to reconstruct the old building, adding the third floor, and opposite to it there will be a new building for the part-time groups, responding the height and module of already existing construction. Between the two buildings there is a glass 2storey gallery with larger module – it’s a common space for all children despite kind of group, there is a dining room, sports and music halls, pool. This building can be seen through and does not create an obstacle for a visual overflowing of one green space into another, and glassing gives a lot of natural light to those facilities that need it. Facades of the building got orange facing, bright color smoothes a little the general severity of straight lines. Within the construction materials will be ecological - terracotta tiles and wood.

The second nursery school Novokuznetsk street is the smallest out of three. In its first variant it was supposed to be taken down and there would be a new construction of five colorful volumes. Each volume have asymmetric double-pitch roof with different angle of inclination. These roofs are more like bevel edges of top part of walls – vertical and inclined spaces are the same. In places of "breaks" of walls there are windows, surfaces of walls-roofs there will be a numbers of windows lighting interiors. Altogether, especially at a sight from above, it reminds a toy which consists of figures of various colors and a little different forms, beaded onto an axis. These figures can be moved in the toy, it seems someone has shaken pin the small houses are put on and they got frozen during game. And this is quite suitable here.

In the second (approved) variant the nursery school on Novokuznetskaya street will not be taken down, but reconstructed and there will be bay windows added, small side wings and attic floor. Old volumes are faced with brick, new ones will be either white or light yellow, of stone. There will be sports and musical halls, a swimming pool. Children's bedrooms, divided into small rooms in the old building are completely redesigned on request of tutors – after reconstruction they will be larger and one bedrome will accommodate a whole group.

The nursery school in Kotelnicheskia pereulok is located on a steep slope towards Moscow-river. So the existing building on one side has 2storey facade and on another – 4storeyed. It made the authors think of dividing groups of part-time and full-time stay by so to say height. Zone of full-time groups is placed in the upper storeys of main building, for part-time groups there will be constructed a new small construction from the river side connecting it by special passages with the basic game and sports halls. Due to relief difference the architects gained space for swimming pool – in semiunderground floor, having lighted it on perimeter with natural light. Above the swimming pool there is a lawn where children can play and even vehicles serving the school may drive there. Architects also saved growing around the school half-century trees and took them for basis of a new landscape solution. Harmony with landscape, grass on roof and dark brick make the building similar to a former school by German embassy on Mosfilmovsky street, add some degree of severity and the traditional character which is peculiar to European educational institutions.

Nursery schools for long time have been built on standard projects. Individual architectural projects of schools recently have started to appear –possibly now it is a turn of small children. It’s really an issue for architectural searches to find a replacement for grey building. Therefore, strictly speaking, it is fine that famous architects were invited for developing projects of nursery schools. Very likely in the process of designing there will appear new ideas and methods; probably these ideas will be applied to typical construction… Or probably in this sphere private designing will be common then. 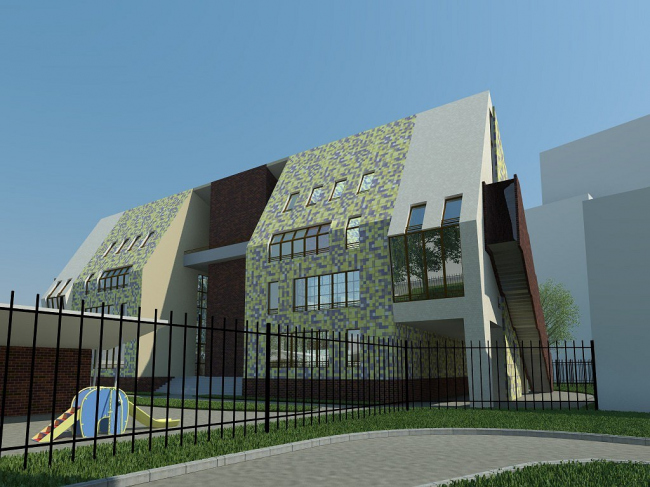 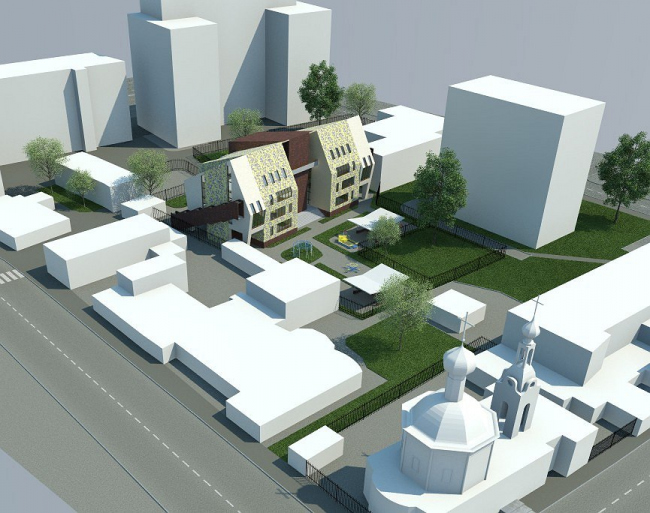 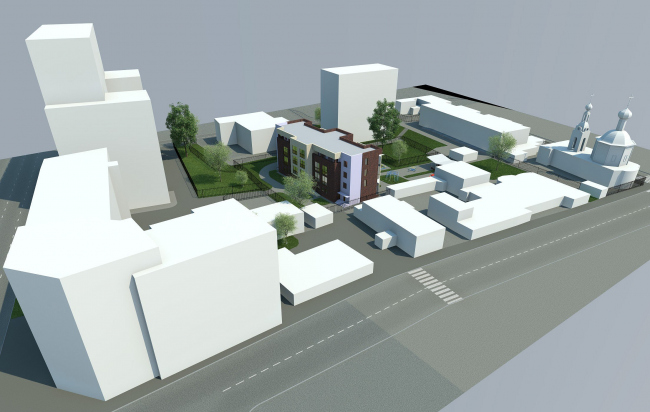 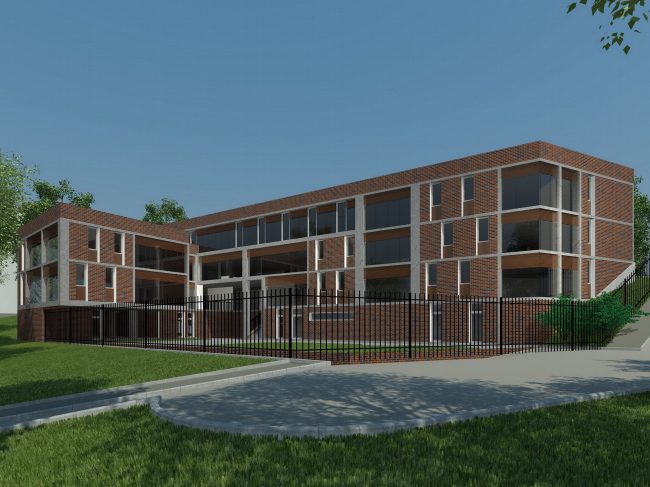