The four towers stand in chain along the Moscow-river bank line, in front of Andrey Bokov’s stadium “Yantar”. This stadium gave name to the city block of residential towers by Dmitry Aleksandrov - “Yantarny gorod”. And the name suggested color of the facades – walls are composed of yellow stones of different hues. If translate from Russian into English the name will be “Amber City”, though there is little common with the famous fantasy saga. The two towers were built in spring and the other two are still under construction.

We have already told about the project of “Yantarny gorod” complex. It was marked with a number of diplomas, among them at “Zodchestvo” in 2004. Most original feature of the project is multilayered atriums inside two towers (the completed ones). Atriums are divided – four storeys for each one. Outside it is towers, inside it is a small town. Only the blocks are not place by each other but one above another. The houses are along Tallinskaya street, atriums almost view the north, apartments have fine views to different parts of Stroginskaya flood plain. Today in Moscow there are many projects of larhe houses with various kinds of atriums and hanging gardens, but “Yantarny gorod” is one of the first.

Outside the towers are not quite common. They are wide because of atriums though they are not low – just composed large towers. But this is not the most important about them. The key idea of these houses seems to be in improving or may be in some way overcoming the genre of elite towers, there too many of them in Moscow. Typical example of the genre is the complex “Alye Parusa” on the opposite bank. "Yantarny gorod" by Dmitry Aleksandrov denies in every possible way this genre in its Moscow understanding.

First, the houses heartily turns away from “Alye Parusa” – service rooms view their side. Secondly, they have little decoration, they are replaced by neo-constructivist corner windows. It was fin Idea to use them here, they lessen “extra" volume, visually lighten quite huge buildings, making them more structured, lined. Thirdly, their walls are not faced with stone, but are laid of yellow stone blocks. Stone is artificial - rosser - its exterior texture finely imitates grain surface of limestone.

If not artificial stone, it’s a common wall. A traditional wall. Its brickwork (very neat, must say) – is not common material for our times and their appear unusual things. What is modern architecture? In past – panels and red brick, today – a fine line of decorative panels fixed on concrete carcass. Nowadays stone is mostly expensive and is used in the form of panels on some most advanced attachment. Face tire looks uncommonly. Such materials are more usual for architectural monuments, for buildings of Stalin times. But not for apartment buildings in Strogino area. Yellow stone adds some resemblance to Pskov atmosphere, to real fortress tower.

Sense of materiality continues in arrangement of the yard, in terraces running down to the river and mentioned earlier stadium “Yantar”. Terraces are supported by solid, reliable and also yellowy walls – this compactly gathered garden looks like a challenge to modern airiness and glassness.

“Yantarny Gorod” is like a monument to growing new methods through somewhat genre of Moscow tower. Or it is a try to radically transform this genre. The towers are solid, crystal, and very material. Very refined. However, genre is a tough thing and sometimes overwhelms. Bright blue color of glass batten, crownlike ledges of the three upper storeys and bright blue constructions on the roofs seem to turn improvement into a joke. Anyway, this is a rare example - there were not such houses before and hardly will be in future. 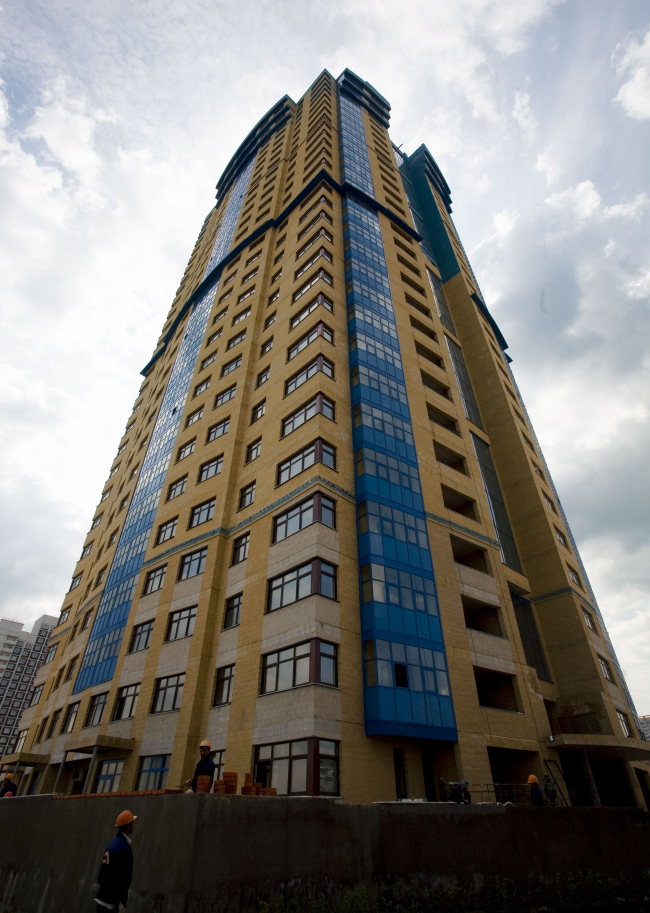 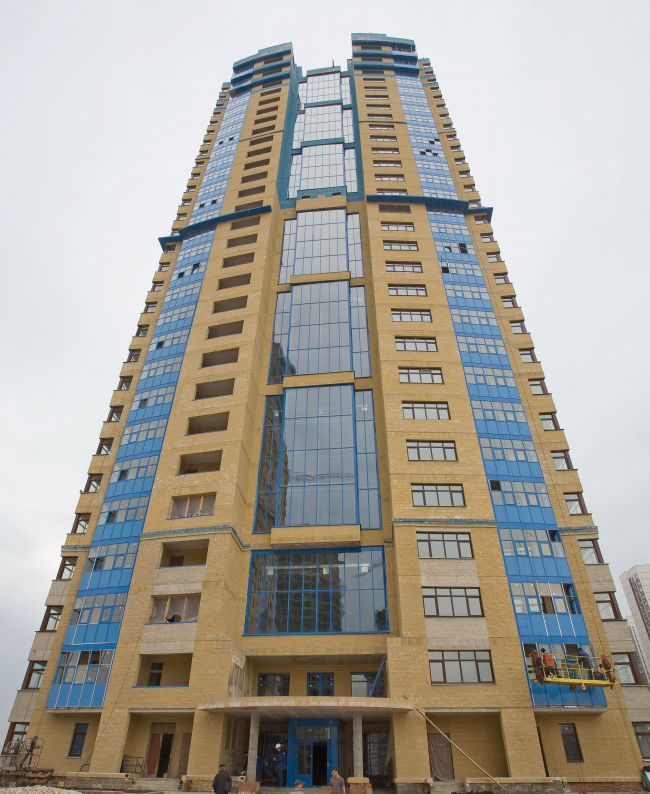